March 31 marked the 55th anniversary of the coup inaugurating 21 years of brutal military rule in Brazil. Like its neighbours Argentina, Uruguay and Chile, Brazil was ruled by a dictatorship that banned trade unions and opposition parties, tortured and murdered activists,and enslaved and killed indigenous people.

Unlike its neighbours, Brazil has never quite come to terms with its dictatorship: the coup is referred to by the military and its defenders as a revolution in defence of democracy. The military bitterly opposed Brazil’s truth commission, and there was no attempt at reconciliation. But even by Brazil’s low standards, President Jair Bolsonaro ordering the military to conduct official celebrations of the coup was beyond the pale. For South Africans, this would be like the government officially celebrating the beginning of apartheid.

Althougha court annulled the order, it didn’t stop the government holding a grotesque celebration of the dictatorship by releasing a video featuring fascistic marching tunes. For Bolsonaro, the dictatorship was a time of peace and plenty with no crime, despite the fact that corruption was so bad in the ranks many in the military concluded that the only way to save the operational functioning of the armed forces was to leave power.

The macabre spectacle of a celebration of authoritarianism sums up Bolsonaro’s disastrous first three months in office.

He came to office with the backing of Congress and the major sectors of Brazilian capital, but already his presidency is on the rocks. The elite could overlook Bolsonaro’s more antisocial tendencies and bizarre beliefs if he could pass the market reforms they crave —pension reform, in particular — but this has proved too much for the president. Bolsonaro has so far shown himself to be both unable to govern and uninterested in governing, despite Brazil’s politicians and newspapers calling on him to get off Twitter and start running the country.

Since coming to power, his government has veered from one calamity and scandal to the next —from a dam bursting in Minas Gerais state in which 186 people died,school shootings and woeful economic performance to the arrest of another former president, in this case Michel Temer, who is accused of heading a mafia that lifted some $500-million over the course of 40 years. 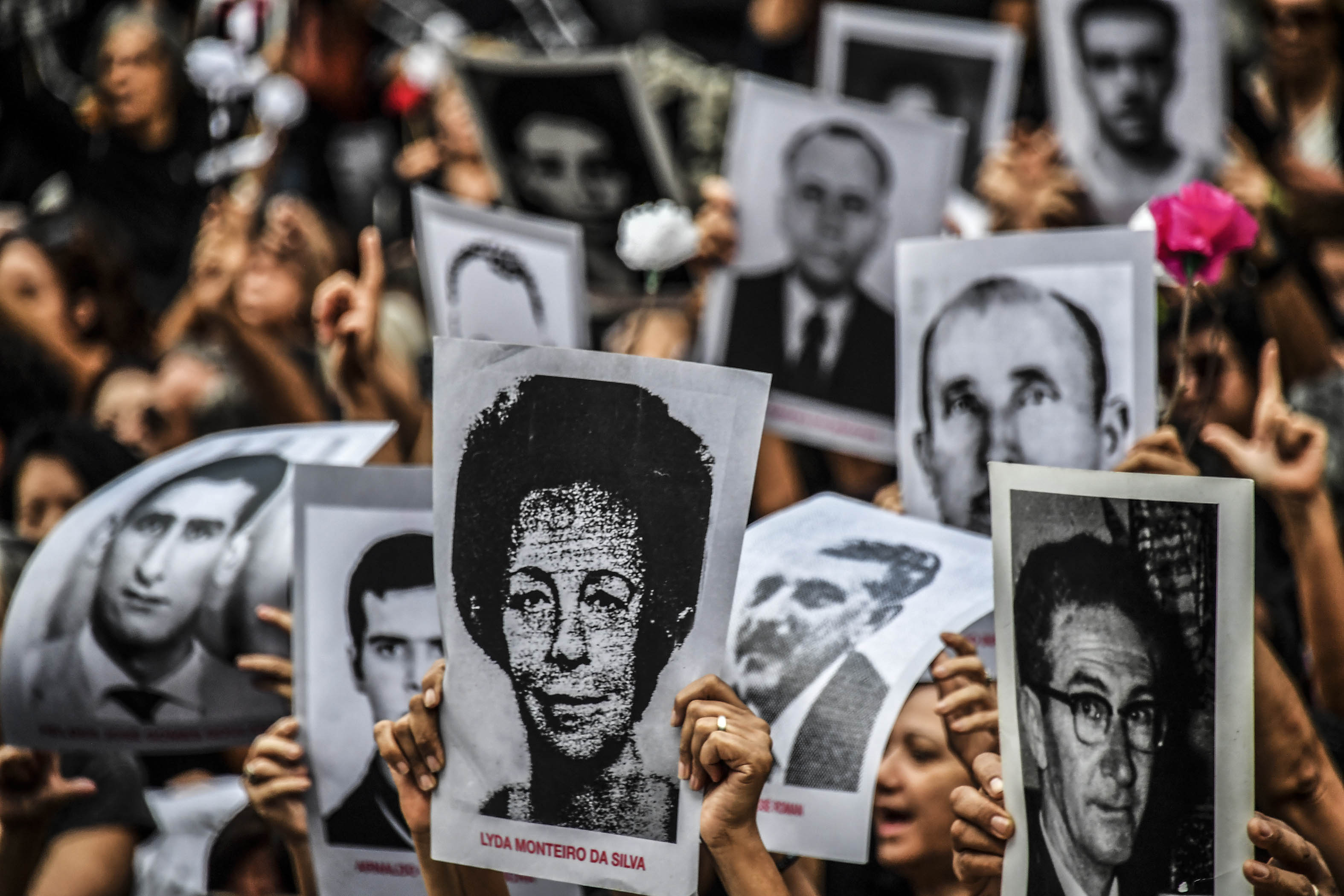 Not forgotten:While President Jair Bolsonaro celebrated the 55th anniversary of a military coup, citizens held up pictures of people who were killed or went missing during the 1964-1985 dictatorship. (Nelson Almeida/AFP)

The government has been thrown into multiple crises by the public interventions of Bolsonaro’s three sons and the bizarre ramblings of his intellectual guru, the Virginia-based former astrologist and culture warrior, Olavo de Carvalho (who among many other things believes Pepsi is flavoured with aborted fetuses) and whose disciples in his crusade against “cultural Marxism” include the minister of foreign relations. For some unknown reasons Carvalho has been granted political authority and is able to hire and fire ministers.

Summing up Bolsonaro’s administration over the past few months is an impossible task, but some highlights include:

What emerges is an executive obsessed with social media, an administration whose mind is polluted by wild conspiracy theories and hatred, and whose sons run amok.

Bolsonaro’s government has been enmeshed in corruption scandals from day one. In January it emerged that his eldest son, Flávio, elected to the Senate in 2018, was probably laundering money through the bank accounts of his driver, a close friend of his father’s and a former police officer with strong militia connections. Flávio also employed the mother and sister of the leader of a group of hired killers known as the Office of Crime, one of whom was recently named as a suspect in the murder of socialist city councillor Marielle Franco.

In early March, about the time of the first anniversary of her death, two men with connections to the Office of Crime were arrested for her murder. The suspected gunman, Ronnie Lessa, a retired military police officer, lives in the same gated condominium in Rio de Janeiro’s Barra da Tijuca neighbourhood as the president. Élcio Vieira de Queiroz, accused of being the getaway driver, is seen embracing Bolsonaro in a photo on his Facebook page.

Although corruption has rarely proved a barrier to governance in Brazil, the latest scandals have greatly damaged Bolsonaro’s presidency for two reasons. First, the government uses social media to try to distract attention from its own scandals and is turning against its former allies. Second, Bolsonaro’s credibility and support levels have been steadily dropping, which means the legion of opportunists who rode his wave to public office are starting to question whether it is a good idea to keep their brand hitched to the president.

Bolsonaro has also shown himself willing to throw anyone who mildly inconveniences him under the bus.

The president has refused to negotiate with Congress, preferring to let his social media guru — his son, Carlos — slander and attack his supposed political allies, in particular the speaker of Brazil’s Congress, Rodrigo Maia, who dared to suggest that the president should spend less time on Twitter and more time trying to pass pension reforms.

Bolsonaro has turned some of the figures in his government —including his vice-president, former general Hamilton Mourão — into the voices of sanity and reason. But his superminister of the economy — Bolsonaro is fond of superministers—free marketeer Paulo Guedes has even been hinting he will jump ship if the government continues on its present path.

Bolsonaro’s governing style has produced an administration dominated by factions and intrigue. There is division between the military figures who dominate his government and the ultra right ideologues led by Carvalho. And there is also the freemarket fundamentalist faction let by Guedes and the anti corruption crusaders led by Moro. A government beset by intrigues and internal divisions does not bode well for Bolsonaro. His refusal to play ball with Congress, while pretending to be above the fray of Brazilian political graft — despite being beset by his and his son’s corruption scandals — is fast turning Brazil’s corrupt political class from being potential allies to the leaders of “the resistance”.

Sensing blood in the water, the mafias that dominate Congress might move to block pension reform in order to take Bolsonaro’s government down.

Although it is too early to write Bolsonaro off, he has so far shown himself to be out of his depth — an uncurious, bigoted leader unwilling to listen or to do anything that mildly requires any political effort. His government might be doomed, but what comes next is beyond anyone’s ability to predict. Much will depend on the fortunes of Brazil’s ailing economy, which is facing slow growth prospects. — Benjamin Fogel, who is based in São Paulo, is a PhD candidate in Latin American history at New York University and is a contributor to Jacobin magazine and the Africa Is a Country website