Night had almost fallen at the polling station at Isulabasha Primary School in Umdoni local municipality’s Ward 19 on Wednesday, but voting had hardly gotten under way.

Only 300 of the more than 1000 voters registered at the station had been able to cast their votes: until 3pm the station was closed because of a blockade by angry residents protesting over their inability to access water, houses and jobs.

Isulabasha and a second voting station down the hill at Stick Farm were both closed because of the protests, which began at about 11pm on Tuesday.

The two were among 14 voting stations in the province — there were 18 countrywide — at which voting was severely delayed or disrupted by service delivery protests, according to the Electoral Commission of South Africa (IEC).

Residents closed the steep road up the hill to Isulabasha — the only access route for vehicles to the polling station — with boulders, trees, burning tyres and plastic water tanks.

Police public order units called to the lower South Coast municipality from Port Shepstone were pelted with rocks as they tried to clear the blockades in the road, which were replaced further up and down the road by residents throughout the morning and early afternoon.

Umdoni mayor Mondli Chiliza was called to the scene twice to negotiate with residents, who blame the municipality for the failure to provide running water, the awful condition of the roads and a lack of development.

Voting eventually began at Isulabasha at around 3pm, with the station and another at Amandawe Primary School also having to cater for voters from Stick Farm, where IEC officials decided not to open the polling station because of the security situation.

Inside the voting station, IEC staff were busy processing voters, whose numbers picked up as darkness fell, under the watchful eye of four public order policing members armed with shotguns and wearing body armour and kevlar riot helmets.

The situation was tense: the clearly nervous presiding officer refused to talk to the Mail & Guardian, only allowing pictures to be taken after the IEC regional manager had intervened telephonically.

“It was rough here,” said an IEC official who asked not to be named. “They weren’t violent towards us but the way they were rolling rocks, it was lucky that nobody was hurt. The police had to clear them five times.”

Sphesihle Hlongwane, a business consultant who has lived in the area for 30 years, arrived to vote just after dark.

“People here are very frustrated. They have been protesting over water, houses and the roads for years. People are angry over service delivery here,” he said.

“There are no jobs. The only work is on farms and through government projects, like the expanded public works programme. Poverty is very high here,” said Hlongwane.

He said residents had met two weeks ago and decided to hold the protests during elections to highlight what was happening at Umdoni.

The municipality, proclaimed in 2016, has been rocked by protests for the past two years, with opposition parties last year calling on the provincial government to intervene and place Umdoni under administration over a breakdown in governance.

“It’s not that the people don’t want to have elections here. There is no problem politically. There’s only ANC here. The people are angry and tired of waiting for years for the same thing,” Hlongwane said. 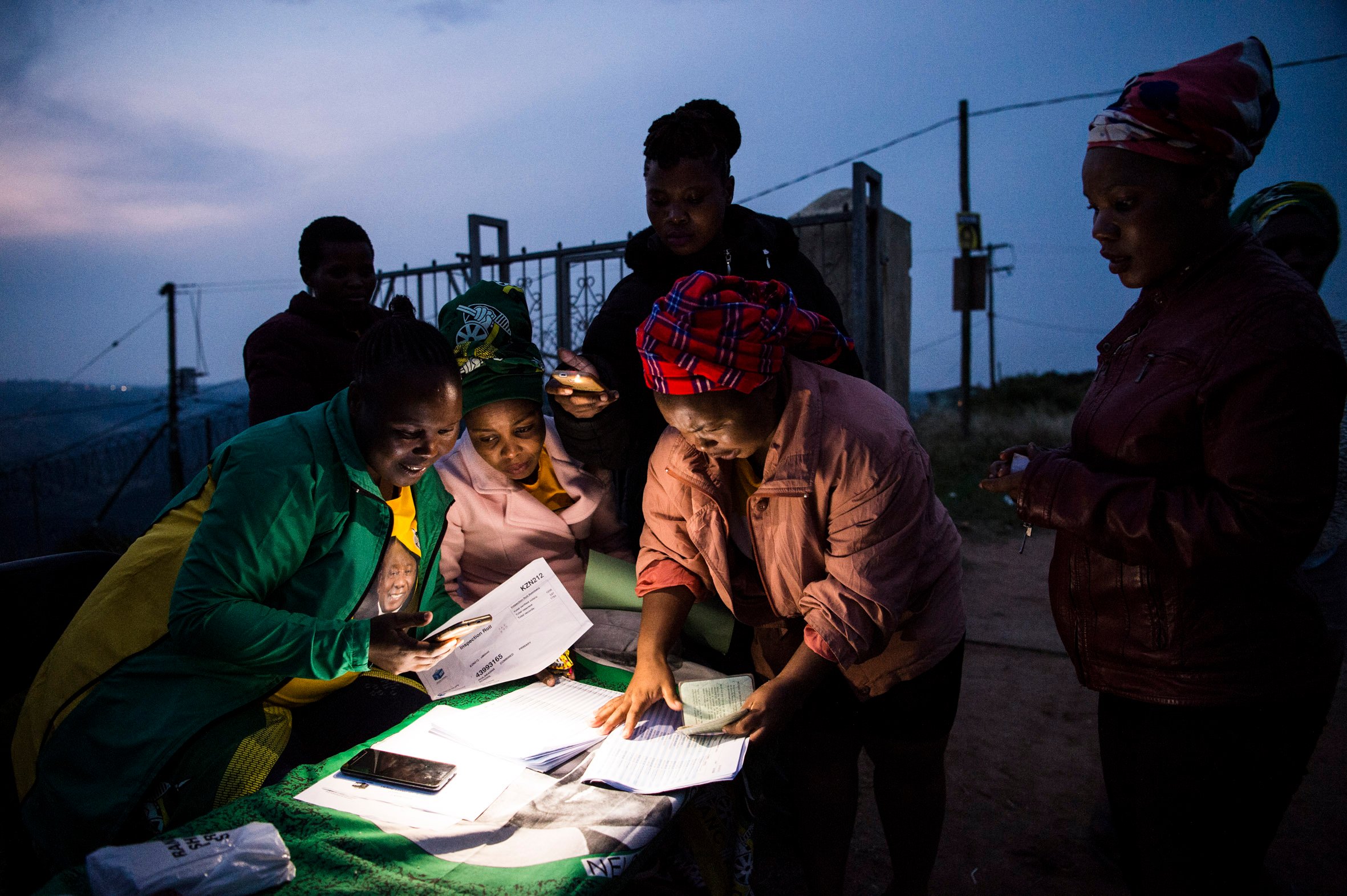 Zinhle Gumede, a 22-year-old student, voted at Amandawe to avoid the morning’s mayhem.

Gumede was sympathetic towards the protesters.

“We couldn’t vote at Stick Farm in the morning, so we went to vote there,” she said. “People are mad here but what is happening is wrong. They have to take water from the river. It’s wrong.”

All indications are that fresh protests took place later on Wednesday night as a new barricade had been erected about 500m down the road from the polling stations as the M&G team left the area.

A ruptured plastic water tank had been set alight further along the road, despite the presence of nearly a dozen South African Police Service vehicles at various points on the hllside. 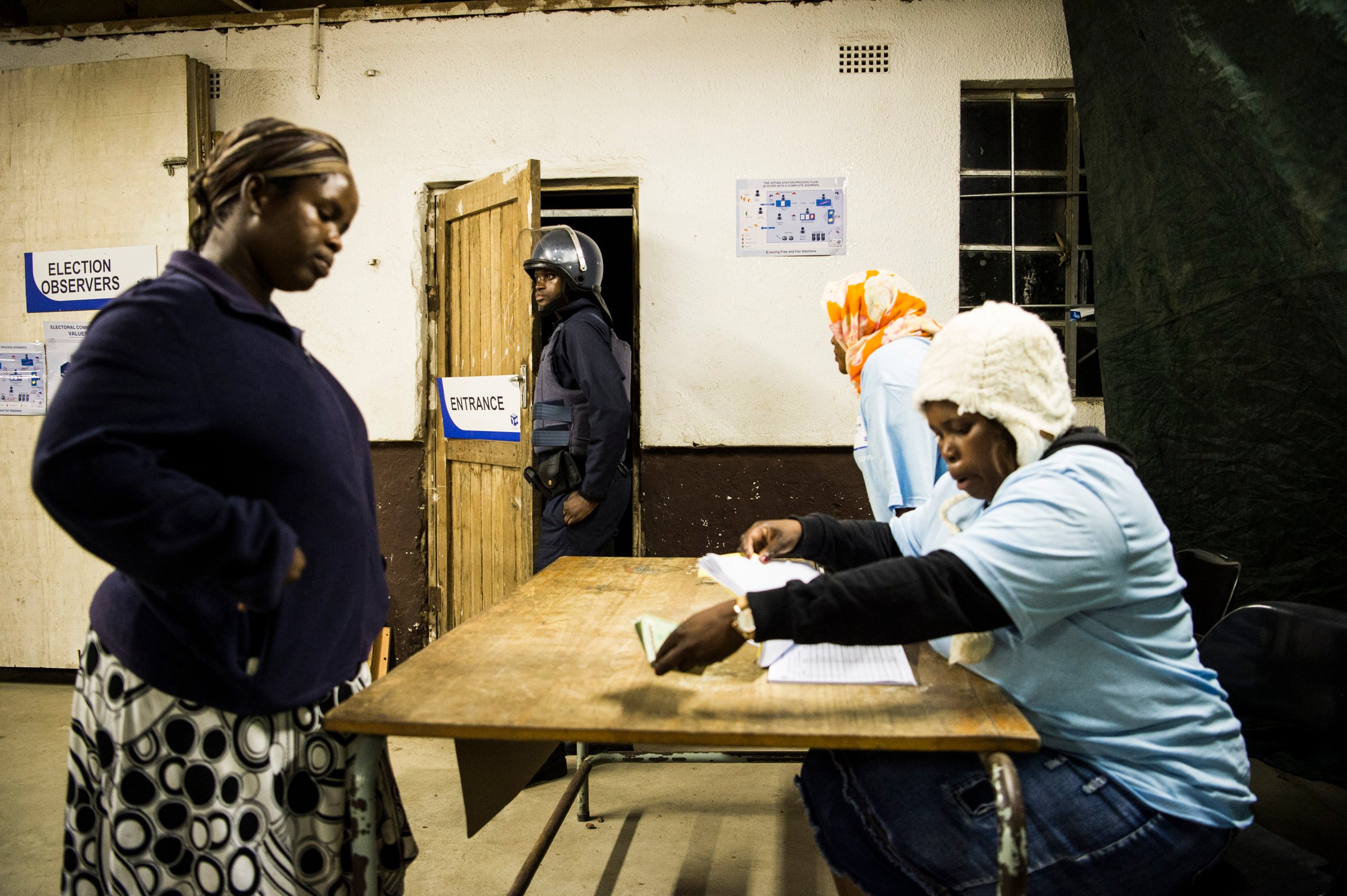 Ready, set, vote: In Umdoni, a voter is ready to cast her vote. (Delwyn Verasamy/M&G)

Earlier in the day at Adams Mission, just inside the eThekwini metropolitan municipality’s southern boundary, where service delivery protests have been raging for several months, the main road was scarred in a dozen places from the tyres and poles residents had burned in order to stop traffic.

At the crossroads near the Full Gospel Church, Themba Khuzwayo and several other young men had gathered next to a tree trunk that had been burned as a roadblock by community members.

Khuzwayo, who said he would vote later in the day, said the area was one of several in the south of the metro that had been engaged in protests for several months.

“It’s bad here. Right now there is no water or electricity for two weeks since there was all the rain. Nobody has done anything about it. Nobody has helped us. That’s why people have been protesting here. What else can they do?” he said.

“The cops came and pushed this out of the road. It was burning. They put it out,” Khuzwayo said. “It will get burned again. Things are fucked up here.”

In Bergville’s Ward 11, residents dug trenches in the road, forcing the closure of the polling station, with five people being arrested by police, according to IEC acting deputy chief electoral officer Mawethu Mosery. 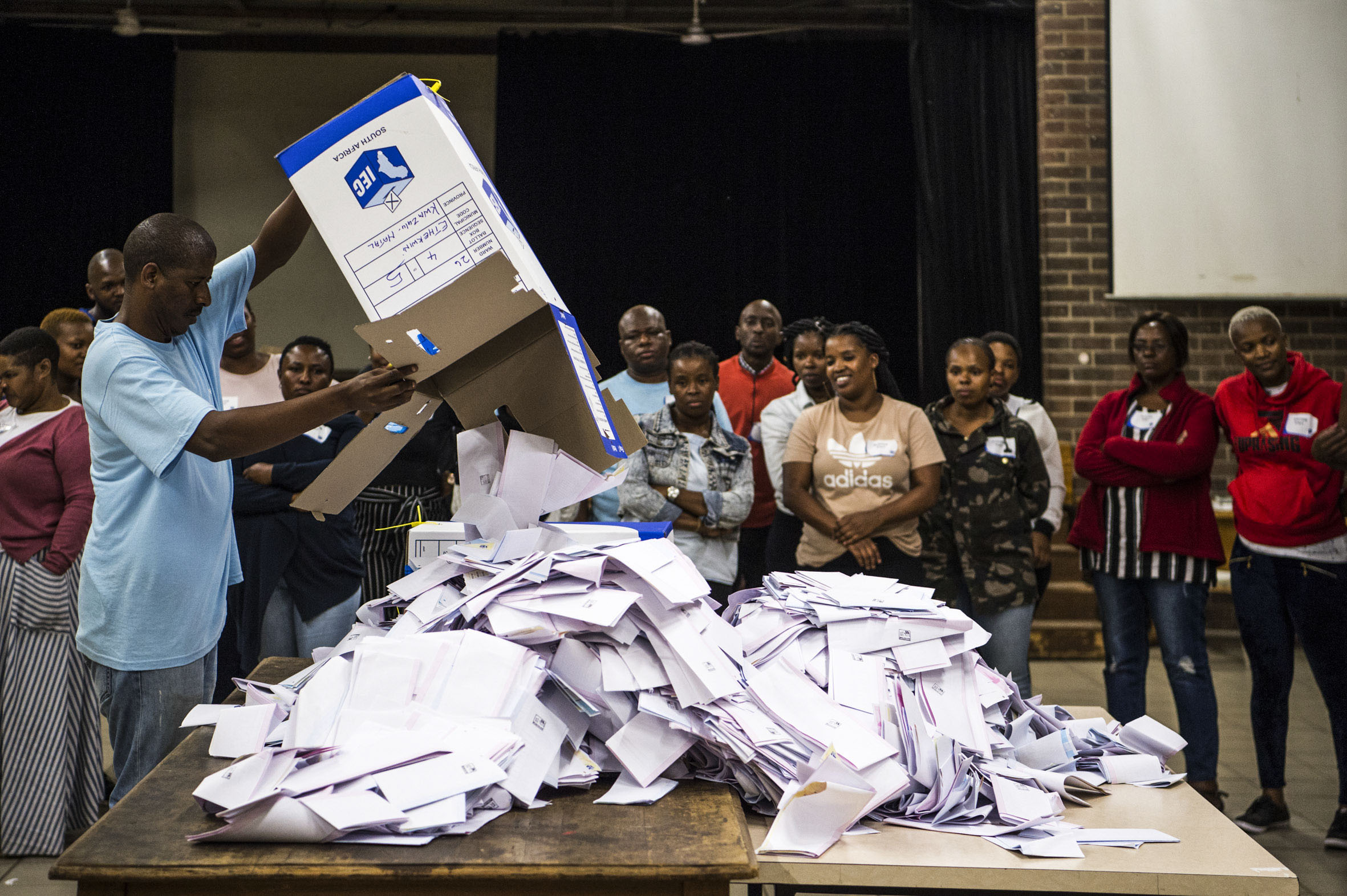 Another person was arrested at Ntuzuma in northern Durban, where protests had also taken place, Mosery said.

Mosery said the IEC was happy with the security situation around voting in KwaZulu-Natal.

“There is political tolerance in the province. There is no incident that relates to political intolerance, which is a very good indicator for the electoral process,” Mosery said. “The only incidents have been related to the service delivery protests which have been taking place, particularly in KwaZulu-Natal.”