This piggery can’t go to market

Mike Fysh, the owner of a family-owned piggery about 20km north of Pretoria, is as congenial and relaxed a person as you could hope to meet, given that he manages a complex operation with 12 000 pigs and an associated abattoir.

Grain has to be trucked in and stored in huge silos, the piggeries have to be kept clean and tons of waste has to be disposed of hygienically. Being in a peri-urban area means that neighbours are not too far off and so smells and odours have to be managed too.

I was not visiting Riverside Piggeries to check out the animals or the scale of the operation. My interest is that the faecal waste gets channelled automatically into what Fysh calls the balloon, a giant dam in which an enormous thick plastic bag rests. Magic happens in the bag. In a process known as anaerobic digestion, bacteria consume the pig waste, producing gas while breaking down the solids. This gas is then used to fertilise the fields of the neighbouring farms.

Riverside Piggeries produces enough of this biogas to generate its own electricity. Near the outsized balloon is a plant that uses the biogas to power two turbines, which produces enough power, together with solar panels installed on two large buildings, to meet 90% of the needs of the farm.

A major bonus of turning this biogas into electricity is that the digestion process produces mostly methane, about 64% to 67% of the produced biogas. Methane is 21 times more potent a greenhouse gas than carbon dioxide, which makes up the rest of the gas produced during digestion.

Fysh reckons the two units, which cost about R2-million of a total R6-million project and produce 120 kilowatts of power, have generated about R2-million in electricity over the four years they have been in operation. This excludes the thermal energy byproduct that is used to heat water for use in the abattoir.

I was invited to Fysh’s farm by Jason Gifford, a biogas expert and chair of the Southern African Biogas Industry Association. Gifford thinks biogas facilities, such as this piggery, could supply — or save — as much as 3 600 megawatts (MW) of power to the national grid, the equivalent of the financially disastrous coal-fired Medupi, which has been plagued by delays, cost overruns and poor construction work. This is about 10% of the country’s operational capacity.

READ MORE: Eskom’s Medupi and Kusile to cost R36bn to complete, will not be halted — Mabuza

Gifford says potentially 12 000 biogas plants countrywide, many deeply rural, could be hooked up to the grid. These would include sewage works, abattoirs and large farms such as piggeries and dairies. At just two jobs per plant, this could create 24 000 new jobs.

Costs vary depending on a range of factors, but Gifford says on average costs would be about R30-million to R40-million for a 1MW facility. Payback periods globally are about seven years.

Optimising the management of waste through the use of biogas means that energy that is now not being harnessed can be put to use. But, Gifford says the primary benefits are environmental, both in terms of the reduction of emissions and water preservation, as well as the fact that this holistic approach to resource management means toxics are managed on site rather than being dispersed problematically into landfills and waterways.

For Gifford, of all available renewable energies, biogas holds the unique potential for a holistic environmental solution, maximising the management of inputs and outputs.

Early adopter Fysh is an enthusiast, saying that because his farm is situated in a semi-rural area with neighbours nearby, he has to ensure he is using the best management systems available. Being able to produce his own electricity makes him independent of the vagaries of utility Eskom, or rather, the municipality of Tshwane, which actually supplies his electricity. But his power facility has not operated for 10 months now.

There are several vendors of turbines and engines on the local market that can do the job of converting biogas to electricity and heat, but the one he chose, a United States company, Capstone, has not been able to support its product locally. It does not have a local agent at present who can service the turbines and source replacement parts when needed. Having made a R5-million investment, Fysh’s power plant is idle and the gas that could be converted into electricity is being flared, at least in a carbon neutral manner. 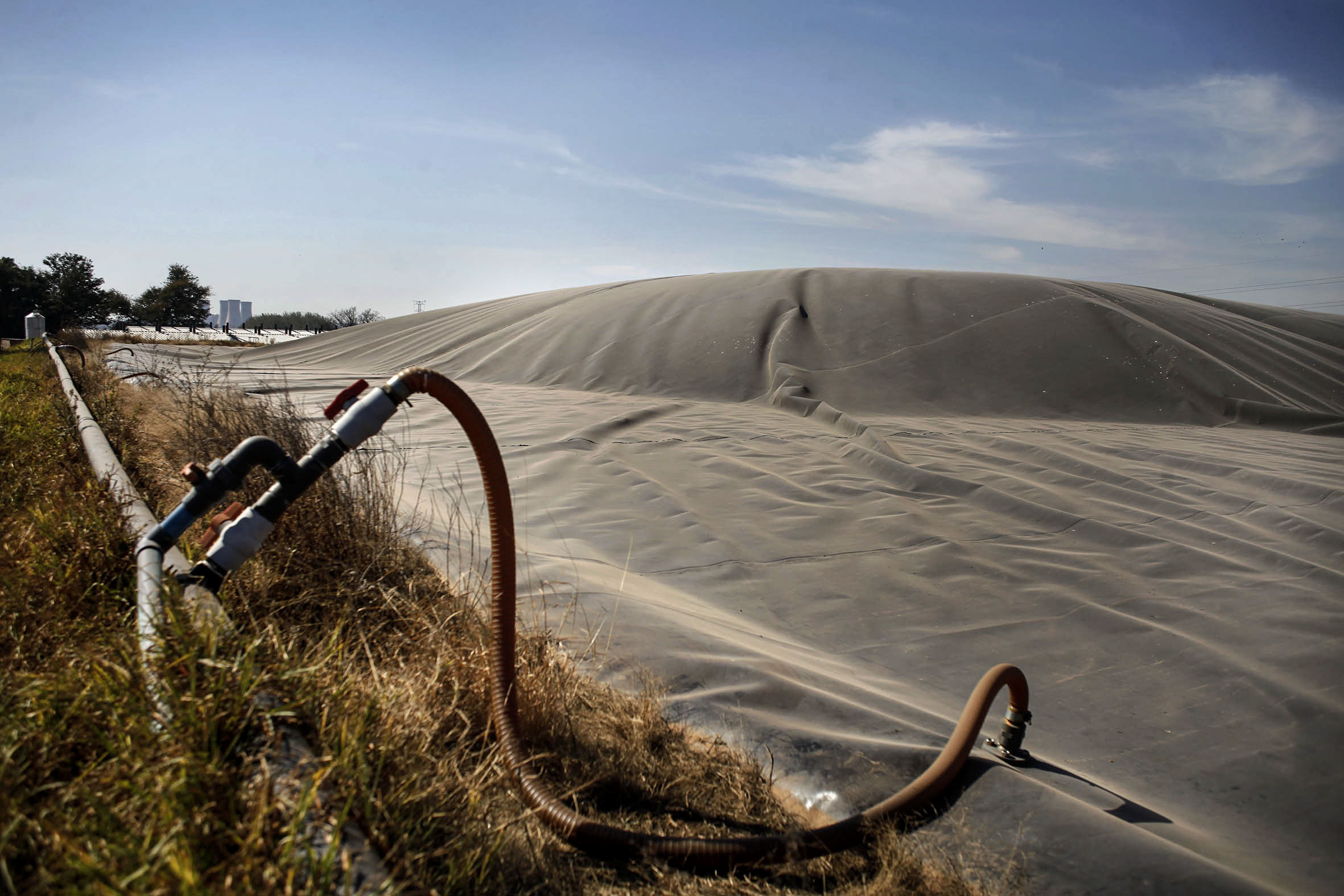 Break down: Biogas is separated from sludge by bacteria in an enormous balloon (above). The biogas is flared at present in a carbon neutral manner (below). (Oupa Nkosi) 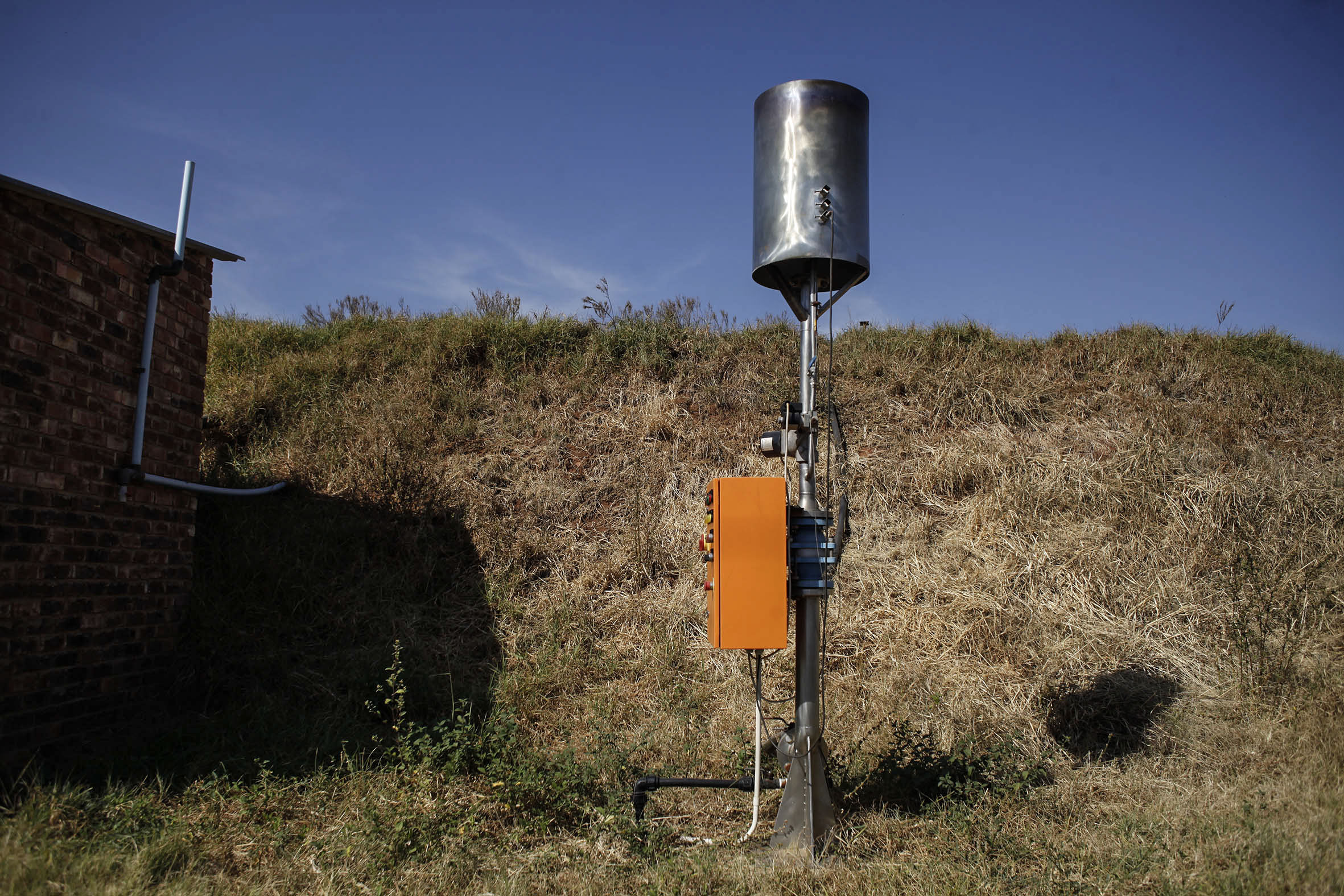 A large piggery such as Fysh’s could potentially supply its excess electricity to the grid, says Gifford, but in this case the 120kW installation is also used to power his abattoir, meaning that the available power is used for on-site operations.

But, says Gifford, there is no market for power produced by biogas. Eskom won’t take this power and there can be as many 27 regulatory hurdles to overcome, sometimes involving national, provincial and municipal authorities.

No single government department will take overall responsibility for championing the introduction of biogas to the South African market. The bureaucracy is onerous and the costs can exceed R500 000 for a single project, just to be able to produce electricity for your own needs.

In contrast, Germany has 9 000 commercial biogas operations. Critics rightly note that its regulatory regime has encouraged monoculture and meant that maize products have been turned into energy rather than food, something a developing country such as South Africa would strictly want to avoid.

But biogas in Germany has seen waste product turned into energy; in some cases farming co-operatives send their waste in tankers to the facility and get fertiliser sent back in return.

Gifford believes the way to get the industry up on its feet is to set up a special dispensation, similar to the way in which renewable independent power producer agreements were launched, where the first tariffs offered were relatively attractive. The tariffs have since been lowered as more players have entered the market and cheaper technologies have become available.

Gifford’s proposal is to pay biogas producers the same rate as Eskom’s megaflex rate for larger consumers, 85 cents a kilowatt hour, and pay a second environmental benefit tariff for using waste instead of dumping it or mismanaging. This tariff would apply in an initial development phase to evaluate pilot projects to determine what, if any, the correct level of support should be. The pilot period should be able to identify, and perhaps quantify, the value of the cleaner outputs biogas produces.

The outcome, based on experience elsewhere, is that we could have a whole new industry, one that diversifies energy inputs and ensures cleaner outcomes.

The industry stands to regionalise power production and to have standby power available during peak hours after dark and when there is no wind. It may in time supply 10% of our power needs, but the key thing is that it would form part of our effort to decarbonise to ward off the worst effects of climate breakdown.

Fysh showed us around his operation. He said that electricity prices had almost doubled in the four-year period he has been producing power from biogas. It struck me that he has no choice but to pursue the path he is on, to better manage the total environment in which his farm operates.

In the meantime, his options are to hope that a local agent is appointed so that his turbines can be serviced and maintained, or to sell them to an Australian party who has expressed interest and then perhaps source another engine that is locally supported. Gifford says Fysh may be able to access grant funding from a United Nations agency interested in supporting a development facility to study the potential of biogas in South Africa.

On the way back to Johannesburg Gifford and I stopped at the Zeekoegat sewage works near the Roodeplaat Dam, also north of Pretoria. This is a well-managed facility that uses its biogas to heat the goggas that do the magic in breaking down the sludge.

This process, which has been used for aeons to detoxify excrement, works best for the bacteria at a warm and cosy 37°C. The gas byproduct is typically used to heat digesters to keep the bugs munching and turning a toxic problem into a usable resource.

Gifford explained that to optimise the workings of the giant digesters, more nutrients other than sewage should be fed in. This brought up an issue to which we had returned several times during the day: that there is no single person who could champion biogas as a necessary input to help turn around an environmental challenge into a green outcome.

Gifford sees such a person in Johannesburg mayor Herman Mashaba. The city has more sewage than it can process with three biogas-to-electricity engines standing more or less idle at its Northern Works plant in Diepsloot and a further two that have never been used at Driefontein near Muldersdrift. Food waste sourced from Pikitup should be added into the mix to put everything in place.

The only missing ingredient would be leadership. Could Mashaba’s Johannesburg show the rest of the country the way?

Slice of life: Consistency pays off