The Afcon that means everything

A tug on the sleeve interrupted the tedium of waiting in the boarding queue this week at OR Tambo. Turning around revealed an impossibly chuffed mother. “He’s going to walk out with Bafana,” she said, gesturing to the young boy beside her.

Soon a girl popped up beside them – both youngsters clad in what must have been their club kit. It was soon explained that they had been chosen from their team in Cape Town and sent by the SA Football Association to accompany South Africa when they walked out of the tunnel against Nigeria in their Africa Cup of Nations (Afcon) quarter final on Wednesday. 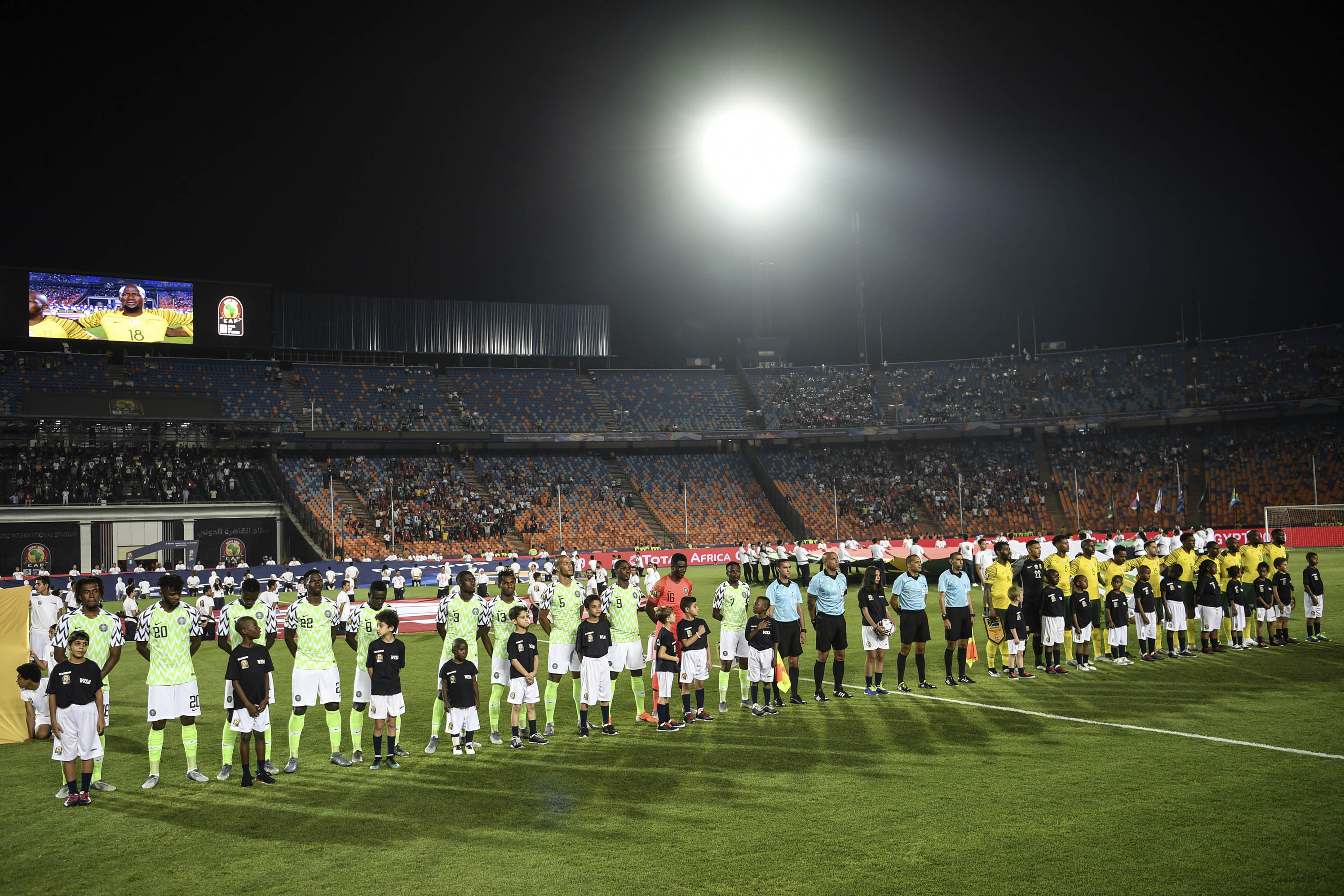 The players take the field for the Afcon quarterfinal match between Nigeria and Bafana Bafana at Cairo international stadium on Wednesday. (Khaled Desouki/AFP)

That a smiling stranger couldn’t resist sharing the news of this honour to anyone who would listen should tell you everything you need to know about how running deep in this competition has come to mean to some people.

Senegal star Sadio Mane is one of those people.

“For me, the most important thing is to win it with Senegal,” he said of Afcon last week. “I will try to score more goals and help my teammates score so that we can finally win this cup.

“This is my absolute dream. I am here for this.”

Hardly a trivial statement coming from a man that lifted the Champions League a little over a month ago. Nor does it feel like a platitude.

This is the first iteration of the competition in it’s new format: moved from a troublesome January slot and upsized to 24 teams. The change in date in particular is arguably a well overdue decision. It’s about far more than removing the nervous gaze of European teams as their stars risk injury under the African sun midseason – it’s about giving Afcon its own slot to strut its stuff on the world stage. Just as the Euros and Copa America have theirs. It no longer feels like a stepchild.

Whatever the cause, it’s easy to identify the teams that have been willing to fight to the bone to keep themselves alive. Your Sadio Manes and so forth. Those that have not have duly tumbled out.

The most obvious example to the contrary, of course, are hosts Egypt.

Arriving in Cairo three days after their elimination at the hands of Bafana felt like arriving at a party that had long since moved on to the next happening spot.

Literally the first thing we saw after disembarking was an adjacent Egypt Air plane covered in decals of the national team. Perhaps it was a biased imagination filling in the blanks but the images looked tired and washed.

What is for sure is the men themselves had long since departed. As we exit the airport our driver points out the road leading into the Marriot Hotel. The route had been inaccessible until now, he says, thanks to heavy military guard while the squad made it their base. Their exit had quite literally necessitated the recall of a mini-army.

Continuing down the main road there are endless posters and billboards wishing the Pharaohs good luck. One massive adidas advertisement shows an austere Mohamed Salah peering at you with the caption “100-million strong”. Elsewhere in the city New Balance has similar patriotism-stirring imagery. So too countless other brands, both local and international.

Salah initially begins to feel like the eyes of Dr TJ Eckleburg in The Great Gatsby. An omnipresent figure moralising your decisions as you pass through the streets of Cairo.

But then you remember how he and his cohort met their tournament end and the Liverpool star instead starts to resemble Cairo’s biggest white elephant.

Gathering a quick street and market place consensus here and there, for whatever that’s worth, many Egyptians feel indifferent about the whole getting knocked out thing. They’re pissed off, make no mistake, but everyone claims to have seen this coming and have been unimpressed with the running of the national team for a while now. The phrase “monkey business” came up at least twice. That’s before anyone goes on to mention the player-forced recall of sexual harassment accused Amr Warda, something no one seems impressed with.

In the aftermath of Egypt’s first elimination as hosts since 1974 (they won it in 1986 and 2006) it’s clear that they might have been onto something. Parliament has called for an explanation, coach Javier Aguirre and his backroom cohort have all been sacked and various Egyptian Football Association (EFA) board members have fallen on their swords and resigned.

“This decision comes as a moral obligation,” EFA president Abo Rida reasoned with the solemnity of a judge handing down a sentence.

“All the technical staff are sacked after destroying the hopes of Egyptian football fans.”

Bafana Bafana, of course, may want a bit of the credit for destroying those hopes.

It was Stuart Baxter’s perfect formula last Saturday that was their ultimate undoing. The duel flank threat of Percy Tau and Thembinkhosi Lorch; the midfield regulation authority of Dean Furman and Bongani Zungu; the perception that Sifiso Hlanti and Thamsanqa Mkhize were put on this Earth to stifle Salah and Trezeguet. 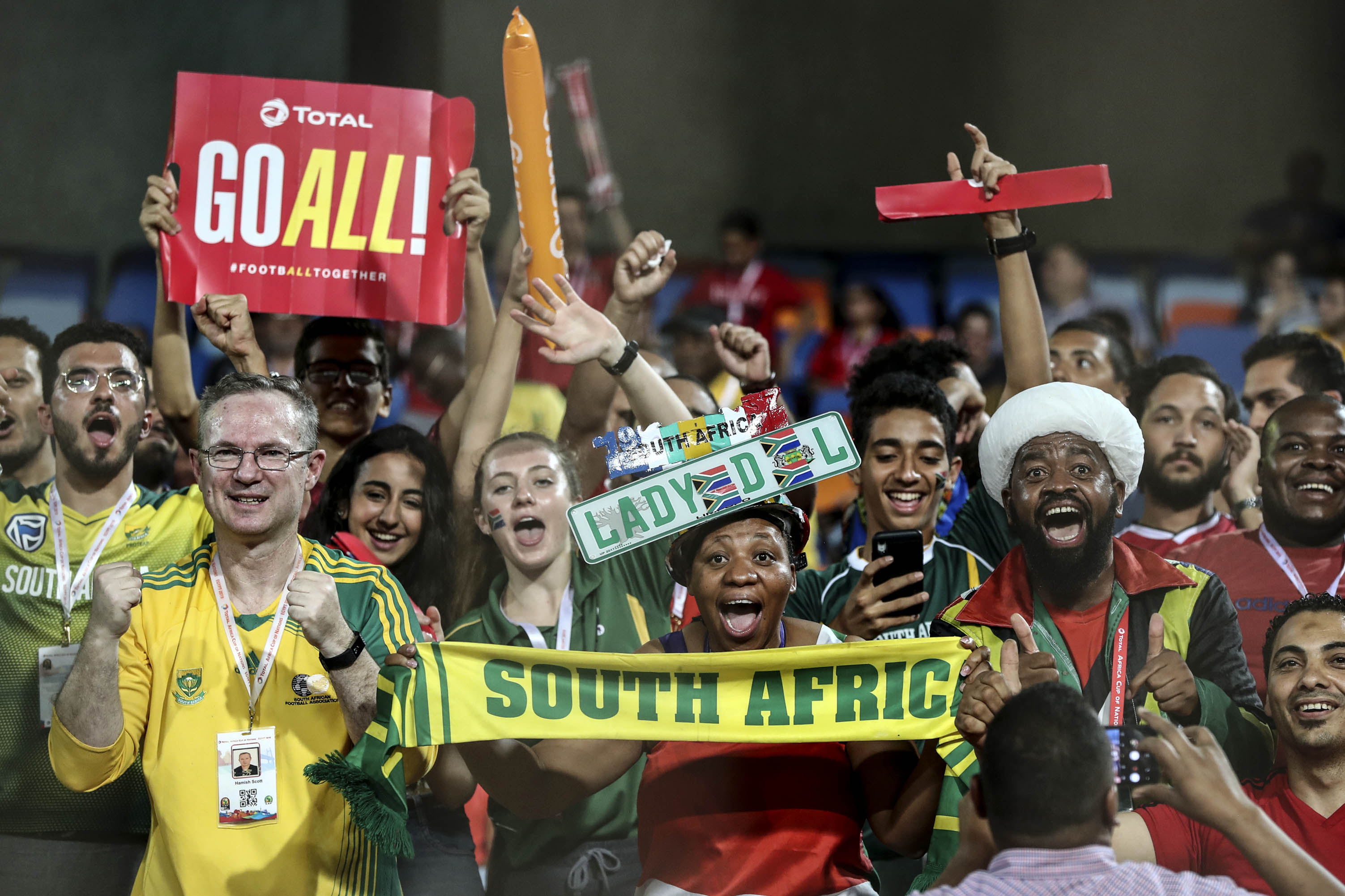 The Super Eagles won 2-1, netting a last-minute goal, and South African fans were appreciative they made it this far. (Sumaya Hisham/Reuters)

The performance left an unmistakable impression. Answering the obligatory “where are you from?” enquiries invariably sparks up an immediate conversation about the game. “Bafana Bafana!” is said over and over by the more garrulous cab drivers and strangers that you come across. Shopkeepers use it as a segway into offering their wares, promising lower prices thanks to our team’s performance or jokingly threatening to jack them up as revenge.

Despite the newfound recognition, everyone promises that the journey will crash to an end against Nigeria. One ridiculously charismatic salesman at the aptly named Royal Perfumes goes as far as to take a bet with one of our party, promising that he will give her three free bottles should South Africa progress to the semifinals.

Others are less gregarious when it comes to discussing their recent pitfalls. Deeper into the Nasr City district, away from the usual tourist attractions, Ibn Hamido offers a tiny slice into the Cairo dining experience. Filled with the most pleasant and subtle wafts of seafood, the double-storey restaurant is almost entirely full by 3pm on week day. Amid the bustle, neither the waiters or patrons have time nor interest to indulge any excitement over Bafana’s endeavours.

As can be expected, many non-football fans now have little interest who comes out on top of Afcon now that Egypt have been eliminated. No one, however, denies having a vested interest in the successful conclusion of the tournament.

A handful of isolated terrorist incidents over the past three years, most recently a car bomb that injured South Africans travelling to the Giza pyramids, have threatened to derail much of the progress made in the years since the Arab Spring. Once one of the world’s most popular tourist destinations, that distinction has been understandably rocked by regime change and instability.

In Afcon 2019 – given to the North Africans after Cameroon was stripped of hosting rights – Egypt has an opportunity to prove on a global stage that it once again deserves to be foremost on most bucket lists.

As you would expect roadblocks are everywhere: policemen in white shirts and pants stopping vehicles at random. All the major hotels have security checks, german shepherds sniff your taxi while metal detectors greet you at the main entrance. Driving along the main roads there are sentry towers placed at various key points, as assault rifles protrude out.

Even as Bafana leaves their evening training on Tuesday evening, numerous police cars and a bakkie filled with heavily armed soldiers follows close behind.

When asked if the average residential area was safe to walk through (a top-of-mind Jo’burger type of question), our driver enthusiastically exclaimed that these days it’s perfectly safe. “Before the revolution, if you came here at night,” he said pointing to the endless rows of tall, grey blocks of flats. “They would take your wallet, car and your wife. Now it’s fine.”

The security checks may be vigorous but, so far at least, Egypt looks to have secured the Afcon legacy it would have targeted. It’s Pharaohs are no longer present but those here in their stead are hungry and will in all likelihood give us a memorable semifinal round. As long as a mother remains proud to see her son walk onto the field for an Afcon match, is there any other measure of success we need?