Since world leaders agreed to the Sustainable Development Goals in 2015, significant progress has been made toward ending childhood deaths from malaria, tuberculosis, and other preventable diseases. Now it’s time to get serious about another SDG: ending violence against children.

At the World Health Assembly in May, we made the case for why governments and United Nations agencies need to spend more on measures to prevent non-communicable diseases (NCDs), injury, and violence against children. One of us — Zoleka Mandela — spoke of losing her 13-year-old daughter to a drunk driver, and of suffering sexual violence as a child at the hands of adults who should have been taking care of her. “It was an abuse of power, and it was a violation of trust,” she told the assembly. “It left me emotionally and mentally scarred. It led me to self-harm and to try to take my own life several times. It led to alcohol and drug dependency.”

We hope this personal account of trauma will serve as a reminder to leaders around the world that violence, mental and sexual trauma, and substance abuse are interrelated issues that can have a deep and lasting impact on the lives of children. The evidence for this is overwhelming. In this year alone, an estimated 1-billion children will experience physical, sexual, or psychological violence at home, in school, online, and in their communities. One in four will suffer physical abuse; if they are girls, nearly one in five will suffer sexual abuse in their lifetimes.

Violence against children is persistent and pervasive, regardless of gender and geography. If we open our eyes, we will see a constant stream of stories about its victims. They come from all walks of life, from a young girl in India who reports that her family sold her to sex traffickers to the French actor Thierry Beccaro, who has revealed that he was brutally beaten by his father throughout his childhood.

What these and countless other trauma stories show is that the impact of violence lasts long after the abuse itself. Victims often experience lifelong social, emotional, and cognitive consequences. They are at higher risk not just of depression, anxiety, and suicide, but also heart disease, obesity, and HIV/AIDS. And these effects are regularly passed down to the next generation, because children who grow up in abusive homes are more likely to become abusers themselves, and to find themselves in abusive relationships as adults. 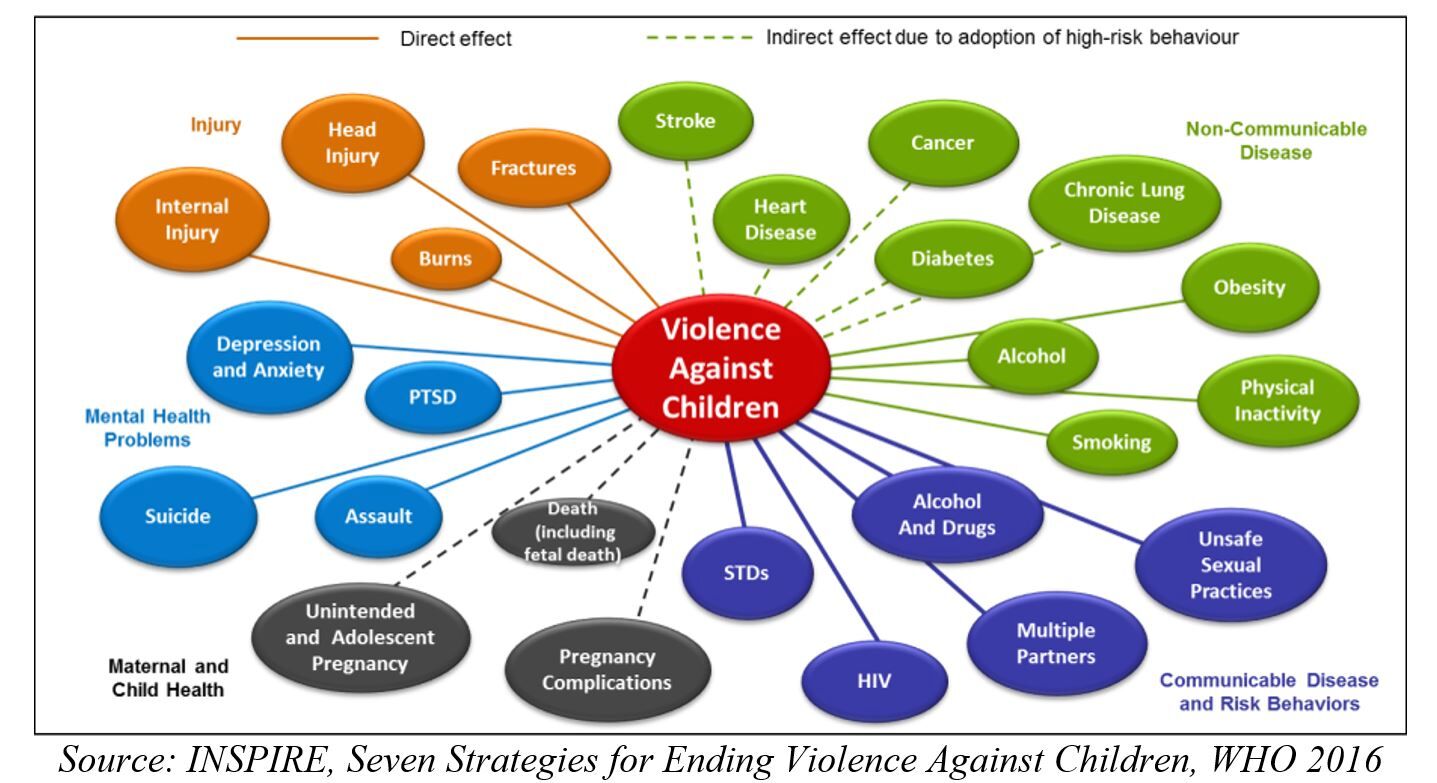 Still, prevention is possible, response services can be made more available, and the political will to address the problem is at an all-time high. As part of the Sustainable Development Agenda in 2015, world leaders committed to ending all forms of violence, abuse, and neglect against children by 2030. To defend the right of every child to live free from fear, neglect, abuse, and exploitation, the Global Partnership to End Violence against Children and its associated Fund were established in 2016. The same year, the World Health Organization issued its INSPIRE report, outlining seven strategies that have proven successful in reducing violence against children.

Health policy is a crucial component of progress, and there are some encouraging signs on this front. In 2017, for example, India’s National Health Policy identified gender violence as one of the country’s seven major public-health concerns. Likewise, Rwanda’s national reproductive health strategy now includes prevention and response to sexual violence as a top priority.

In addition to these specific examples, a broader effort is underway to promote universal health coverage for children, and to coordinate policies between ministries of health and child protective services. More governments and public-health agencies are recognizing the link between violence and mental health, and are taking positive steps to provide psychosocial support for victims.

But the battle is not won. Violence-prevention and response services are still absent in many areas; where services are available, children are too often treated without the benefit of evidence-based protocols. From medicine and counseling to criminal justice, large segments of the public sector in some countries lack appropriately trained professionals to care for child survivors of violence.

The global health community has confronted similar challenges before. There has been tremendous progress toward ending childhood deaths from malaria, tuberculosis, and other preventable diseases. These gains are the result of political and financial commitments, and of sustained attention and action on the part of governments and multilateral institutions. The same level of commitment and action is needed to address the scourge of violence against children.

Making the investments needed to end violence against children will also accelerate progress toward a number of other Sustainable Development Goals. But if we do not make those investments, the hard-fought progress that has already been made toward universal health care, high-quality education, and other SDGs will be offset, or even reversed.

Nelson Mandela once observed that, “There can be no keener revelation of a society’s soul than the way in which it treats its children.” To keep the momentum from the WHA’s 72nd session this year, we must appreciate the personal stories and shocking statistics about the ongoing scourge of violence against children. Finding inspiration in the progress made so far, world leaders must redouble their commitment to ensure that all children are afforded the safety and opportunities they deserve.

Zoleka Mandela is a writer and activist. Etienne Krug is Director of the World Health Organization’s (WHO) Department for Management of Noncommunicable Diseases, Disability, Violence, and Injury Prevention (NVI). Howard Taylor is Executive Director of the Global Partnership to End Violence Against Children (GPEVAC).

Accompanying this commentary is a figure, which you can downloadhere.