Creative incubators are set up to accelerate and support the growth and success of entrepreneurial startups. This is facilitated through granting entrepreneurs access to resources such as a physical space to work in, mentorship and training from industry experts, WiFi, startup capital and networking opportunities.

Support for cultural careers is scarce in South Africa, so creative incubations such as Red Bull’s Amaphiko, the Box Shop in Soweto and the Leaders in Motion Academy in Pretoria are received with warm receptions from up-and-coming creatives.

Instead of creatives questioning the motives of angel investors, ensuring that the model behind the incubator they are involved in is sustainable, and unpacking the motives that drive such establishments, the need for such spaces means their operating models often escape public critique.

The latest addition, AMPD Studios, is no different. Powered by Old Mutual in collaboration with advertising agency HaveYouHeard, AMPD Studios looks to equip emerging musicians with the musical, entrepreneurial and financial tools that they need to ensure longevity while avoiding industry exploitation. Old Mutual funds the incubator and HaveYouHeard takes care of the space’s day-to-day operations by employing a studio manager and a sound engineer.

The two-story space is in Newtown Junction Mall — a stone’s throw from the Market Theatre and a local taxi ride from Braamfontein — and AMPD Studios is yet to be short of foot traffic since its official opening four weeks ago. 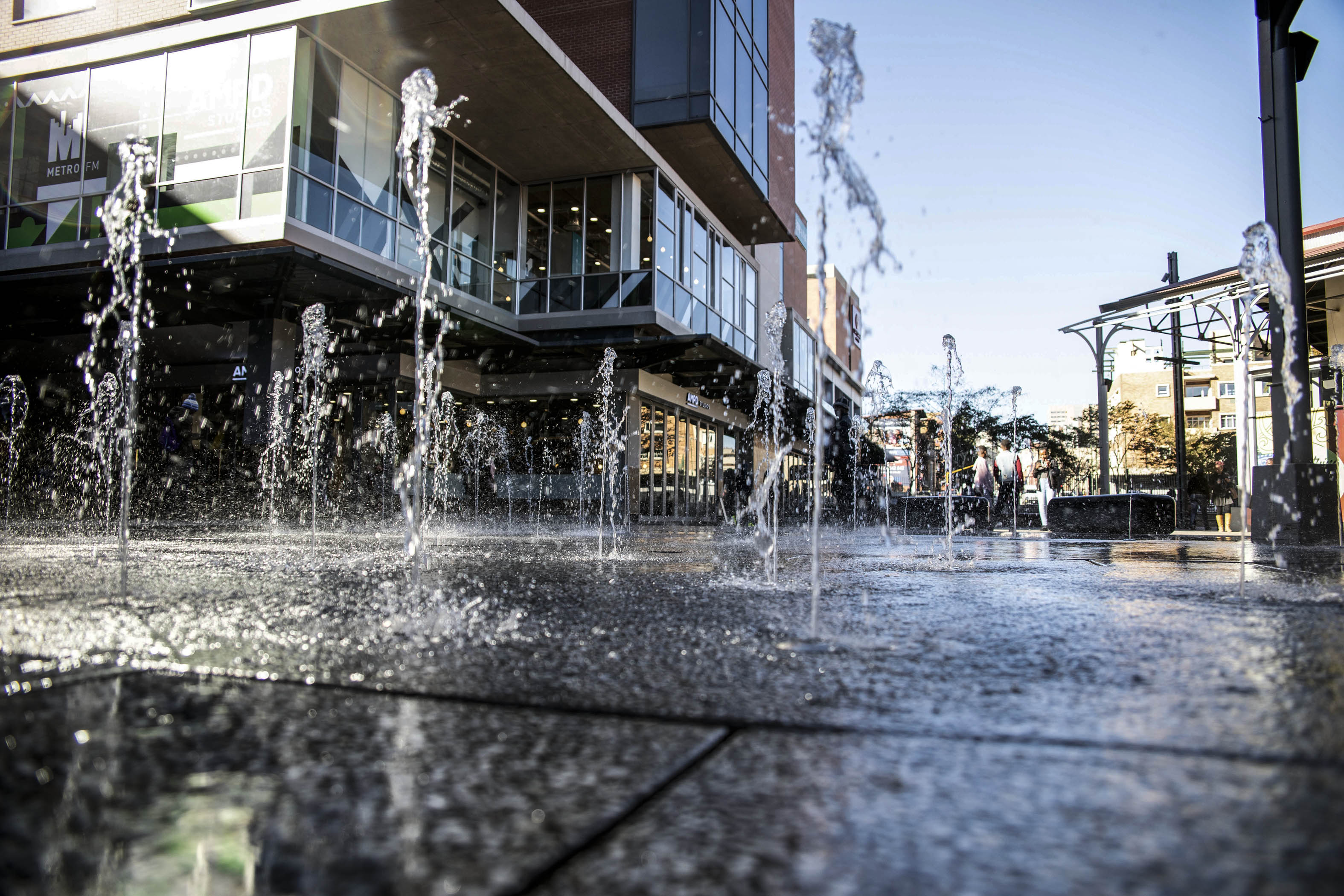 The ground floor boasts a coffee shop, a boardroom, co-working spaces and a mobile stage. While this floor is a free for all, regardless of interest in music, the hub turns into a specialised space on its first floor. Here there are two state-of-the-art recording studios and a satellite broadcast room for Metro FM, as well as three workstations fitted with the design and music composition software.

“We envisage a dynamic venue that will serve as a platform and springboard for music stars, as well as a laboratory for learning, growing and building financial prosperity,” Old Mutual head of brand Thobile Tshabalala said in a press statement.

While facilitating an impromptu tour of the space, Thabang Madia, the resident sound engineer at AMPD Studio, says, “Only members have access to the first-floor space.” He explains how the public’s level of access has nothing to do with money.

With a three-year lease for the Newtown space and no plans to charge patrons booking fees for its various offerings, it seems as though Old Mutual is selflessly working at a loss.

However, to access the ground floor and make use of its facilities free of charge, patrons must sign up by filling in a Google form that requires your name, surname, phone number, email address, age and permission to contact you when Old Mutual is advertising its products. This gives the bank access to information it can use for marketing purposes. The next tier of access is available to clients who have a bank account with Old Mutual. Patrons are encouraged to open an account with the bank because it’s a small price in comparison to what AMPD Studios has to offer.

According to Siphiwe Mpye, establishments such as AMPD Studios are a subtle way of getting young people to engage with the brand behind the activation during our area when everything is branded. Mpye is the founder of The Noted Corporation, a company involved in brand activation by using creative content.

One such way is through the storytelling platform Imbawula’s association with Nedbank. “The days when you could just make an ad or put a logo on something and think that is enough — those days are over. Brands need to stand out in the midst of all the clutter. The more a brand can try to pull at your heartstrings and tap into something that moves you, the better. Just doing advertising is not enough anymore,” says Mpye. He goes to liken what Old Mutual is doing with alcohol brand J&B encouraging young people to buy J&B by opening J&B Hive in Johannesburg and the Red Bull Amaphiko Academy.

“There’s always some tension between the customer and the brand, in terms of who is being served [of] the two parties. What I can say is that audiences should be wary of brands that try to place themselves at the fore by being the conversation instead of being the entity that facilitates the story coming to fruition,” Mpye adds.

“It’s really essential that we have hubs of this calibre to enjoy free resources, make connections, and equip ourselves with the workings of the music business,” says Jo Lumka, an AMPD patron. After an introduction to the space, she was given an opportunity to produce and present a radio show called Ampd Live on the digital radio station The Eye. According to Lumka, “The struggling artists can work on their craft by using this space. We don’t have to spend time stressing about ways of making our dreams come true with very little to no financial support.”

In addition to making use of the space, AMPD Studios offers those of its patrons who are inclined to pursue music careers an opportunity to learn from legacy and established artists, including Thandiswa Mazwai, Khuli Chana, Sipho “Hotstix” Mabuse and Letta Mbulu. 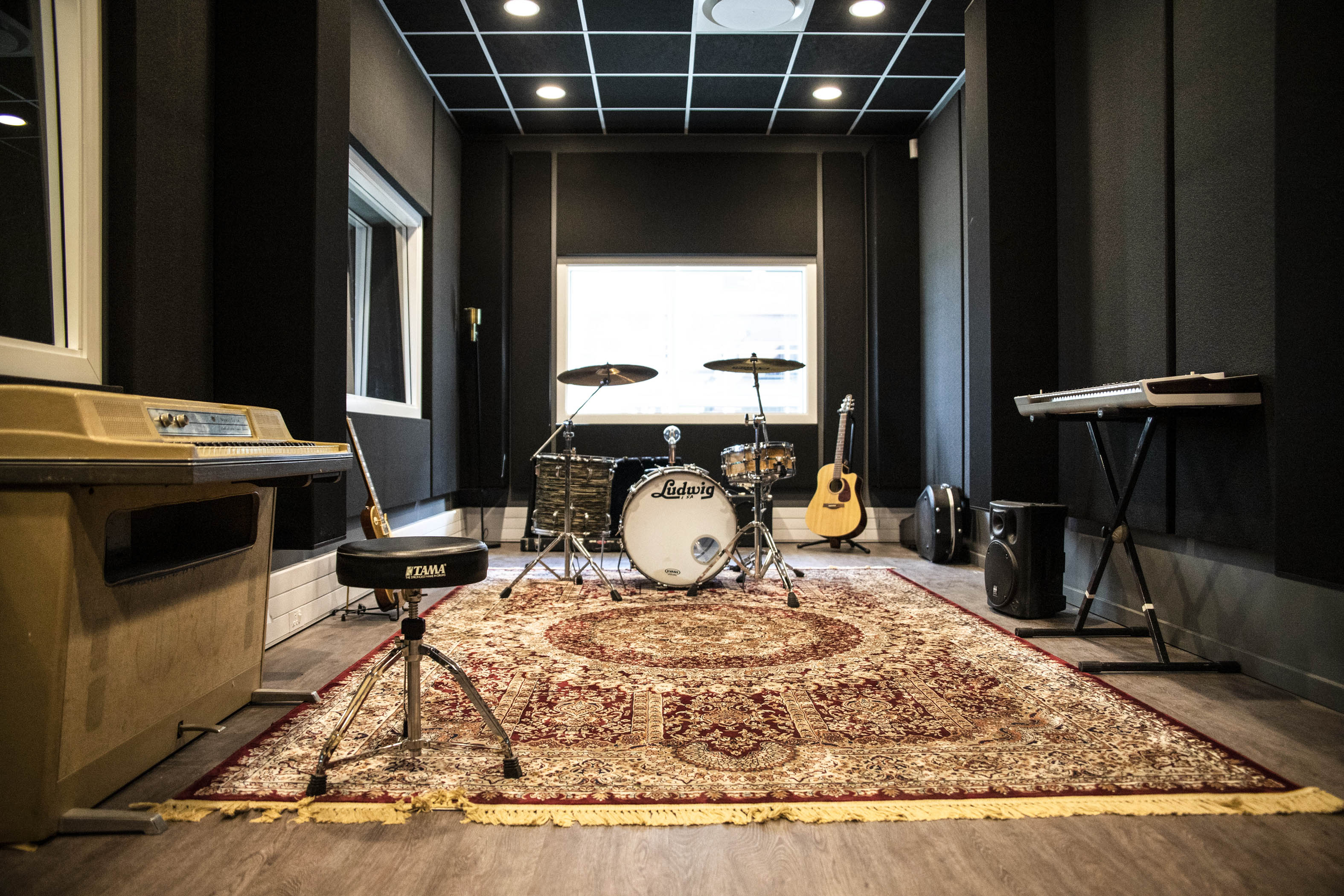 AMPD Studios, is no different. Powered by Old Mutual in collaboration with advertising agency HaveYouHeard, AMPD Studios looks to equip emerging musicians with the musical, entrepreneurial and financial tools that they need to ensure longevity while avoiding industry exploitation. (Hiram Alejandro Durán/M&G)

“The idea is for successful music stars who have built sustainable businesses or careers to share their knowledge and expertise with emerging artists and music entrepreneurs,” said Tshabalala.

Downstairs, these encounters take place through masterclasses and forums. Masterclasses feature experts sharing insights about which contracts to sign, longevity, branding, managing your money and commercialising your talent. And under the title Icon-Hero Conversations, a legacy artist and an established artist compare their experiences of the industry and how they overcame challenges. Upstairs, the aspiring artists have the opportunity of receiving one-on-one guidance and feedback as they refine their work.

For those who are unable to attend the masterclasses and forums, the series will be broadcast live once a month on Afternoon Express, Metro FM and Old Mutual’s digital platform.

To control how many people use the first floor, potential users have to formally apply, so as to ensure their seriousness. “We want people who have knocked on doors and those doors have been shut. So you should have samples of your work, or proof that you tried,” explains Selloane Moleli, a public relations agent who works with AMPD Studios.

Despite our digital age in which aspiring musicians can access a bootleg version of the same software and use their bedrooms or dormitories as studios, Madia still sees the necessity of such incubators. “A lot of you have studios at home. But there are benefits to being here. You’re in a working environment that encourages you to push, you’re in a networking environment, you have these great acoustics and there’s immediate feedback. If you come here, you’re bound to grow.”

AMPD Studios is open from 9am to 6pm every day of the week. For more information, email [email protected] or send a Whatsapp message on 081 707 6636