There is a hole on my street. Intermittent attempts by the city authorities to deal with this have been in vain. Instead, it has grown and, further along the left, right and right, newer, bigger holes have formed, some now more resembling dongas running the length of two adjoining blocks. Impromptu stop-and-goes have formed and vehicles ease their way into what has now become off-road terrain, here on the cusp of Joburg city. The snooze button for that extra 10 minutes of cherished mid-winter sleep became a distant memory.

And then I got a couch to ferry me to work. Well, if a couch had bucket seats and the menace of a rottweiler, it’d be the new Ford Ranger Raptor.

Ford has to get brownie points for investing a further R3-billion into its Silverton plant in Pretoria. Critically, that means an additional 1 200 jobs. 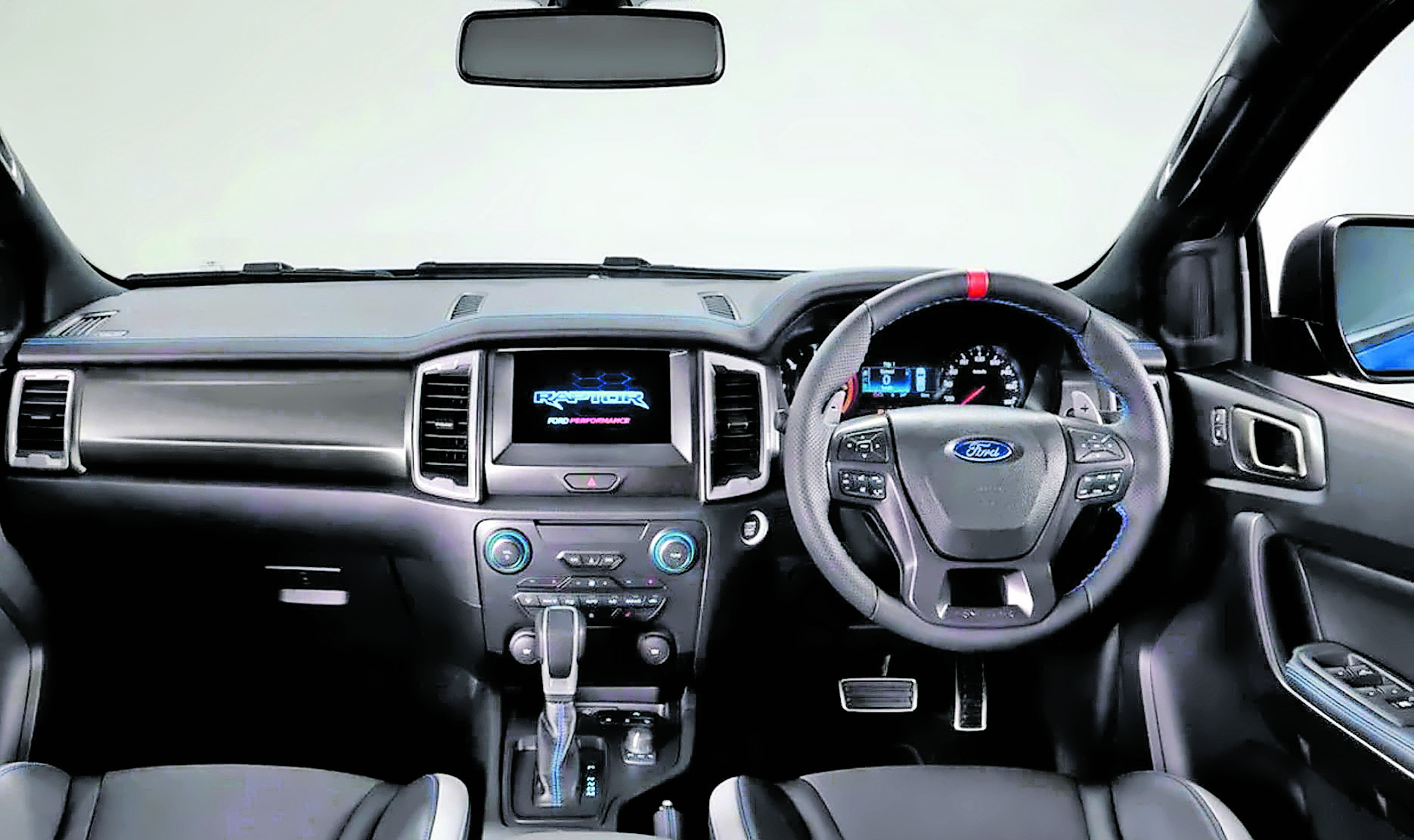 Pant worthy: The leather interior, akin to a couch, means you can wear the shortest of shorts and still be comfortable

When Ford initially came out with its current Ranger series there was admittedly some trepidation as to how the South African market would react to what to all intents is a pronounced move towards the American “truck” styling. The answer is in the numbers and the Ranger has clawed its way to be among the top two by sales volume in all but KwaZulu-Natal and the Western Cape (they really, really like hatchbacks there). That’s among all new car sales in South Africa over the course of a year. No small feat when you’re dealing with a depressed economy that warrants even greater interrogation of large-scale purchases and an emphasis on value for money.

And then they decided to make it even bigger.

As has become standard in speciality bakkies, the Raptor signage is omnipresent though thankfully not overstated. With 283mm of ground clearance and a menacing demeanour, thanks to flared arches and specially designed BF Goodrich 33-inch tyres, trying to be inconspicuous in this vehicle is a bit like Shaquille O’ Neal trying to land a part in The Hobbit. Even in the ubiquitous white (one of five standard colours), this vehicle makes a statement. Not quite “how’s your mother?” but damn close.

In the too-short time that the Mail & Guardian has been bequeathed this vehicle, we have used that extra 10 minutes of snooze time to dive into the urban dongas. Couch.

With an impressive-sounding two-litre bi-turbo engine, you wish for a little bit more “go”, hence our inability to get anywhere close to the claimed 8.3l/100km fuel economy.

But then again, this is a vehicle engineered to have fun with. With four of its six different terrain modes made to deal with adverse conditions, this is a bakkie that begs you to speed up in the dirt and not to slow down for yumps or humps. The hefty tyres means you feel it on the steering wheel but in such a fashion that one may even offer “nimble” as a further description of the vehicle’s handling ability.

Those clever people at Ford obviously took extra special care to cater for the manne who prefer the co-op short pant or jean pant (the brevity of these shorts is suggested by the absence of the “s”). Having consideration for exposed thighs, the leather seats have soft suede inlays that add to the ride comfort, regardless of the season.

The side-step is a necessity and chunky enough to comfortably ascend into the cabin without sacrificing any of that off-road clearance.

The final word goes to the kids, whose wonder at the sheer presence of the vehicle nearly made the R803 300 price tag ok. Apart from its larger dimensions, there’s a lot of added engineering that has been put into this vehicle, especially with respect to its suspension and braking as opposed to its brethren in the Ranger range. And you can feel it. A bakkie is not just a bakkie like any other, and in that the Raptor has few peers.

This weekend we’re going to take it into the bush some more and
do things that’ll likely scare us. We’ll tell you all about it at mg.co.za/motoring

To fight Covid-19, we must fight intellectual property, trade and investment rules