They don’t have the superpowers of the state, police or military. They don’t have access to networks and resources such as well-established NGOs. And, although much attention in Cape Town’s most violent neighbourhoods has been on the deployment of the South African National Defence Force, small interventions by ordinary people are paying off. And they’re making a change with fun, not force.

Roseline Nyman is an advocate on the Cape Bar. Her other job is as a volunteer — introducing yoga to children living on the Cape Flats.

Her colourful yoga mats are jarringly out of place between the tenement flats of Hanover Park — an area where the Americans and Sexy Boys gangs battle for turf. Their battles mean that it’s usually tough to find peace and calm; avoiding stray bullets means you’re always on the alert for gunfire.

But when the mats are out, women lean from balconies, men stand on corners as children learn to breathe and stretch. Nyman says: “These children get to release that trauma and pain that is in their bodies. They sometimes just need to unwind from all this anxiety.”

Nyman, who is also a trustee at the Trauma Centre for Victims of Violence and Torture, says children in the Cape Flats townships are traumatised, with many suffering from post-traumatic stress disorder.

Trauma counsellors say children’s brains develop more slowly when exposed to violence. They’re prone to be jumpy, agitated, aggressive, and are unable to concentrate. This leads to a chain reaction:losing interest in school, dropping out and being unable to find employment, then continuing the cycle of poverty, dependency on substances and often crime.

But small interventions, such as Nyman’s yoga classes, are helping. She says: “In the beginning their muscles were tight. Some were uncontrollable. It was difficult to practise yoga positions for more than an hour. But gradually we started seeing them become more relaxed. They could concentrate. And they became more aware of their [living] conditions.”

As a trial lawyer, she has also had to represent alleged gangsters in court, where she hears their stories and sees how damaging surroundings can force people into violence.

“Many of these young men don’t have an alternative. Because of gangsterism, because of child neglect. Many of them become drug addicts.”

She’s advocating for more holistic educational programmes to help deal with trauma, to end the cycle of intergenerational poverty, abuse, and neglect.

“If we don’t deal with trauma with programmes like yoga, or psychotherapy, then this trauma remains with these people for the rest of their adult life. It’s a recipe for violence, because that anger hasn’t been dealt with.” 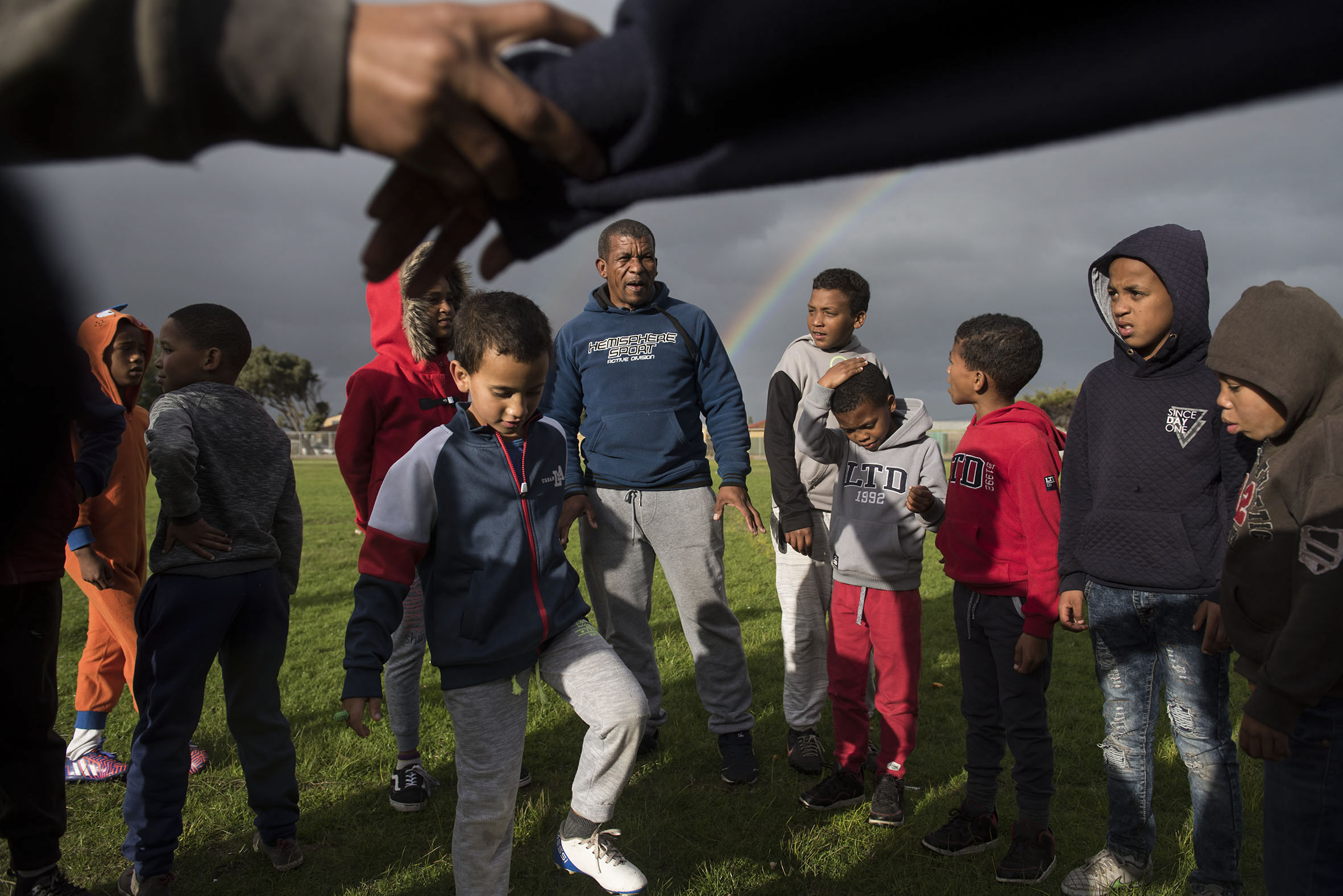 Twenty kilometres away, in Lavender Hill, Mark Nicholson’s home is an informal clubhouse for members of the Lavender Hill Football Club.

Nicholson, one of the club’s founders, says he is giving back what he says he has taken away from the community. “As a young man, I was in a life of drugs for 16 years. I used mandrax and alcohol. I was almost a bergie [vagrant].”

He’s trying to heal traumatised and emotionally wounded youngsters through physical exercise and by building a fellowship between the 200 or so girls and boys in his club.

“Sport is the healer for the trauma of what these kids are going through. For a short while, they seem to forget what is happening at home and how things are at home. And it’s not just gang violence affecting them. It’s mental abuse, it’s bullying. Once you see them playing, they forget what is wrong at home.”

Nicholson says that along with guns, gangs and substance abuse come the violence and trauma of poverty. According to government data, almost a third of households in the area have an average household income of R3 200 or less. A lot of this is supplemented by government social grants.

Nicholson says: “We can see in their facial expressions — the sadness in their eyes. It tells you something isn’t well at home. When we ask, they will say they haven’t eaten today and don’t feel like training.

“So we go to the bread box and we give them something to eat first. And then they feel happy and energised again.

“I would say about 40% of our children’s parents are drug and alcohol abusers. And the bullying starts at home when the parents don’t have anything to use. So they take their stress and frustrations out on the kids.”

But the chance to play freely like any other child is often short-lived.

The field where kids train is known in Lavender Hill as “The Battleground”. It is a place where rival gangs have hand-to-hand fights. Or a place where stray bullets fly overhead.

Nicholson says that last weekend residents had a fun day on the hill, trying to get outside after five months of gunfights.

“While they were playing, these guys started shooting at each other. All the kids did was fall flat on the ground. When the shooting stopped they moved to my house, opposite the field. And when the kids saw the police, they just started playing again.”

Both Nyman and Nicholson say they receive minimal external support. They operate with meagre donations to make soup or sandwiches for children when the need arises. But they’re driven by the belief that one child healed is a chance to break the cycle of violence and hopelessness.