Strangers are blamed for our burdens

In times of economic crisis, the flourishing of fear and ignorance always seems to coincide with the death of common sense and compassion. As social chaos widens its reach in civil society, government brains are viewed as void of solutions and the state as increasingly impotent.

Pervasive unemployment, systemic poverty and ballooning inequality, a flailing state apparatus, corrupt governments — these problems are complex. Often they require creative policy solutions to be implemented in the long-term through the collective action of several sectors of society but few civilians have time for this and many politicians seem to lack the will to bring change. Instead of difficult policy work, easy solutions are proposed and sometimes implemented to try to soothe citizens and release the rage and panic brewing in their bones. An ever-popular quick fix is to create strangers who become society’s scapegoats.

We tell ourselves that these people are irreconcilably different from us because they do not share our nation’s values and beliefs. Our collective conscious is branded with the notion that merely because of where they were born, they are undeserving of our empathy and not entitled to basic state care. These strangers carry the burden of our blame.

READ MORE: EDITORIAL: Blaming migrants is not on

Crime, drugs and violence; everything can always supposedly be linked back to them. For a fumbling and lethargic government, the stranger is summoned as an explanation for the state’s inadequacies and blamed for putting a strain on the state’s capacities. These strangers stand as repositories for our fear and hate, their bodies becoming vessels for a cathartic violence.

South Africans have always struggled, and often failed, to deal with the diversity that is inevitable in society. Ironically, those of us who were once strangers, who were stereotyped in the minds of white citizens as barbaric natives, who had to struggle continuously to assert our humanity, have now re-packaged similar alienating rhetoric to be directed toward people from other countries.

Frequently I hear people exclaim “I’m not xenophobic but …” This is inevitably followed with: “Somalians are taking our jobs and Pakistani businesses aren’t paying taxes, Nigerians are selling drugs to children and Zimbabweans are running human trafficking rings.” It’s becoming worryingly common to hear these hollow outcries. What is worse is that such opinion is being flaunted as fact, as an objective reflection of reality rather than as unfair prejudice.

Are the myths generated by our national discourse anything more than stories? Even a brief overview of the research on the lives led by foreigners unravels these lies.

A perfect example is the claim that migrants are stealing South Africans’ jobs. The Migrating for Work Research Consortium released two studies in 2014 which found that 82% of the working population aged between 15 and 64 were “non-migrants”.

According to the same research, based on data gathered in 2012 by Statistics South Africa, only 4% of the country’s working population could be classified as “international immigrants”. Even in Gauteng, the province with the largest foreign-born population, only 8% of its working population fall in this category.

Even in the informal sector, international migrants do not have dominance over South Africans. Sally Peberdy, a senior researcher at the Gauteng City-Region Observatory, found that “less than two out of 10 people who owned businesses in the informal sector in Johannesburg were cross-border migrants”.

Despite the easily accessible evidence, Cabinet ministers such as Aaron Motsoaledi and Lindiwe Zulu, former minister Nomvula Mokonyane and Johannesburg mayor Herman Mashaba have participated in the proliferation of grossly untrue information regarding the working status of international immigrants.

Politicians and prominent public servants seem to be continually exploiting the misdirected frustration of citizens in recent years. In 2017, Lieutenant General Deliwe de Lange, the former provincial commissioner of the South African Police Service (SAPS) in Gauteng, claimed that 60% of suspects arrested for violent crimes in the province were illegal immigrants.

Unfortunately, many media outlets took her claims at face value. Inspection into the claim, as done by Gareth Newham of the Institute For Security Studies, reveals worrying inconsistencies in the data collected by the police.

Newham highlights the obscurity of the claim, considering that the police don’t publicly release data on the nationalities of those they arrest. Second, the 2016-2017 annual report by the SAPS reveals that police find perpetrators in only 23.9% of murders and 17.9% of aggravated robberies. Newham argues that in the majority of murders and aggravated robberies, police have almost no clue who the perpetrators are. This makes it absurd to accurately claim that undocumented migrants commit the majority of violent crimes.

As of July 2017, only 7.5% of people in South African prisons were foreigners according to Michael Masutha, then the minister of justice and correctional services. Clearly this shows that most criminals in the country are South Africans and not migrants.

It isn’t enough to condemn people’s anxieties as phobia. Fear is often irrational but the conditions that nourish our social terrors must be understood. If we can begin to make sense of that which appears senseless, steps can be taken to stop it. 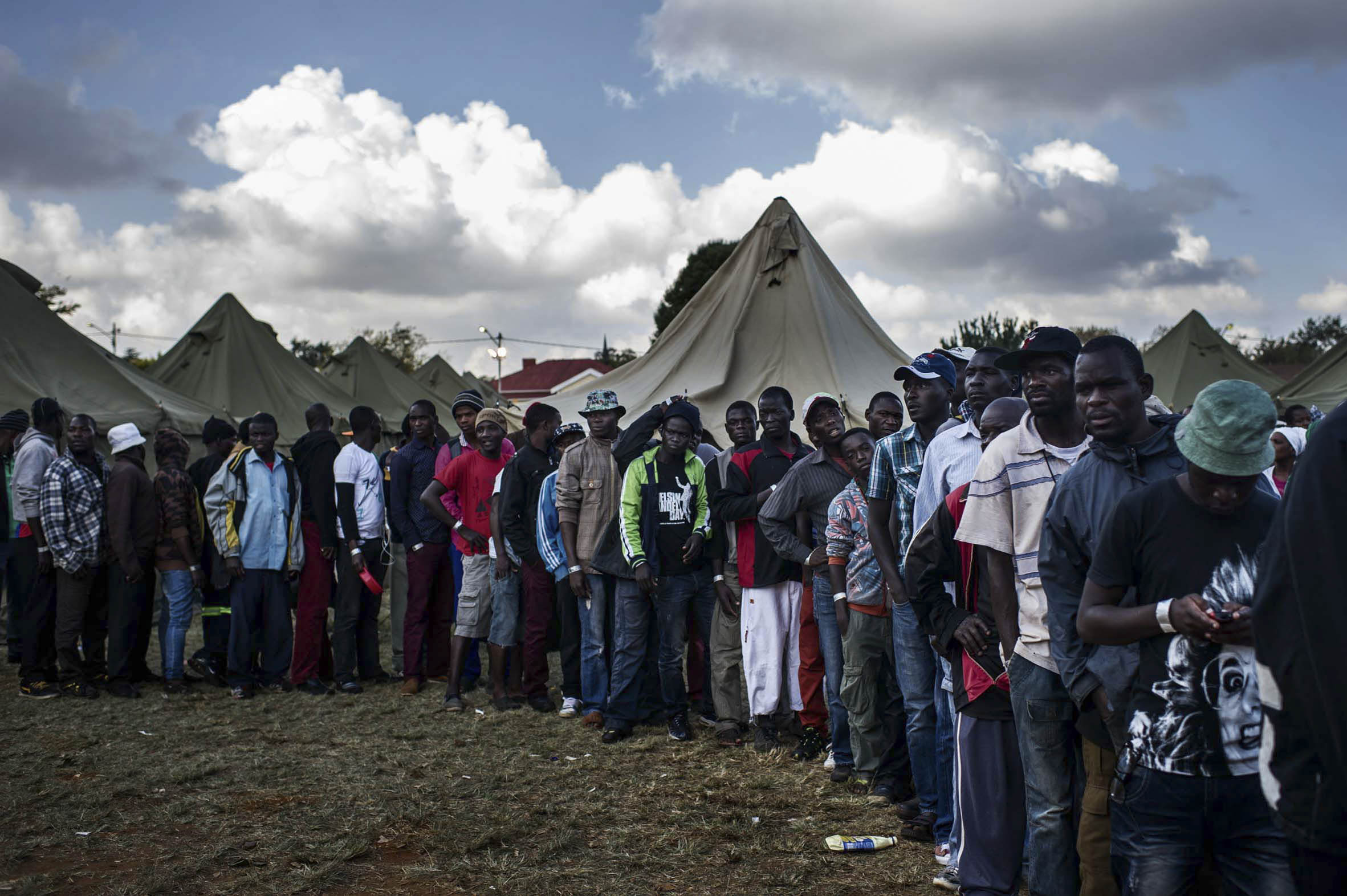 Outcasts: Foreign nationals at an internally displaced persons camp in Primrose, Germiston, following an outbreak of xenophobic violence in April 2015 in parts of Gauteng and Durban. (Fredrik Lerneryd)

As much as people prize freedom, we also need security. In the various compartments of our lives — family, friendship, work, finance — a certain level of certainty and order is required for us to function productively. Certainty about the job market or the political arena is rarely absolute and instability has always existed in societies. But, what were once precarious moments have become a permanent state of affairs in South Africa.

It’s become difficult to invest trust and hope in the economy or in our institutions. Citizens are anxious about being able to keep jobs and millions are stuck in the limbo of unemployment. The poor, working and lower middle classes who have jobs struggle to enjoy the fruits of their labour against the ever inflating cost of living. Those attempting to climb out of intergenerational poverty with the ladder of tertiary education are at times met by an unwelcoming job market or spend their young working lives buried in debt.

Safety is a rare comfort to experience for those who can’t afford electric fences, high walls and privatised security. And even those in upper-class neighbourhoods aren’t always safe. Murder, sexual assault, aggravated robbery and common robbery are begrudingly accepted realities.

As order and security fade, so does our ability to reasonably locate the source of our problems. The result? We desperately try to rescue our lives from chaos by expelling those who seem to have disturbed our peace, sustaining an environment where people from other countries are among the most detested people in the country. Ultimately, though, the scorn or frustration towards international migrants is misdirected and useless.

It wasn’t Nigerians or the Congolese who ransacked millions from the state, insulting and betraying taxpayers. Bangladeshi people do not run the municipalities that fail to deliver basic services. Malawian policemen aren’t responsible for the negligence and corrosive corruption in the police force. Zimbabweans do not sit on the executive boards of multimillion-dollar corporations that continue to retrench workers. Nor is any foreign national responsible for the economic system that requires companies to sacrifice the livelihoods of workers so that business to stay afloat.

The harassment, killings, rash deportations or corralling of people from other countries into concentration camps will not save our economy, fix our education system, renew our hospitals or annihilate crime.

Politicians continue to fail citizens. Instead of admitting failure and massing the political will to explore and implement effective solutions, they distract us with shallow complaints about immigrants. And, as history has proven to us time and time again, legitimising anger towards immigrants or any “other” is a dangerous distraction, sure to end in disaster.