Despite the South African Human Rights Commission declaring the water in Hammanskraal unfit for consumption, citizens are being forced to buy their own as well as pay their municipal bills

Tebogo Rapodile has a purple-brown scar that borders the top of her belly button like a frown. On Monday the scar is tucked beneath the waistband of her thick black stockings. Sitting in the shade of Sebothoma Hall in Temba, Hammanskraal, Rapodile says every time she looks at the scar she is filled with sadness.

“The damage has been done and fixing it could change things, yes. But I already have a scar that I was not born with … It is sadness within me, because I nearly got killed. I nearly died,” the 39-year-old says.

Rapodile says the scar marks the area where doctors operated to find the cause of an intestinal infection that had left her suffering from painful stomach cramps.

She says the cramps started after she made herself a cup of coffee using water from the tap, despite boiling it. 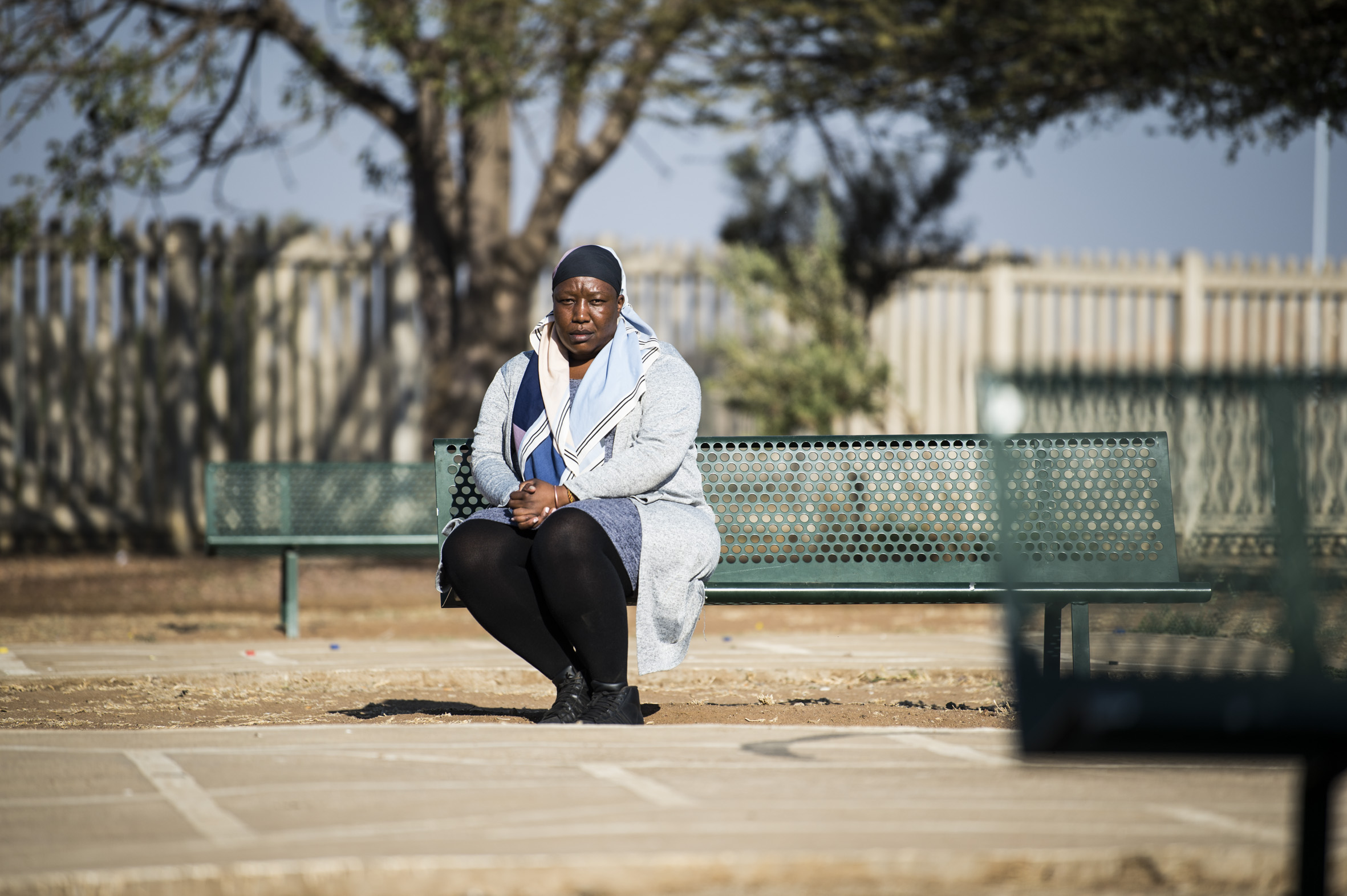 Water woes: Tebogo Rapodile had to have surgery for stomach ailments which she says are related to the dirty municipal water found in Hammanskraal where she lives. (Delwyn Verasamy/M&G)

Last week, at a community meeting at Sebothoma Hall, the South African Human Rights Commission — based on findings by the Council for Scientific and Industrial Research (CSIR) — declared the water in Hammanskraal, north of Pretoria, unfit for human consumption. The CSIR concluded that “it can safely be said that some of the drinking water determinants in Hammanskraal are not compliant with the SANS [South African National Standard]”.

In July, the Organisation Undoing Tax Abuse (Outa) demanded that the City of Tshwane take immediate action to ensure the safety of drinking water supplied to Hammanskraal. An analysis of water samples commissioned by the organisation found traces of E coli and nitrates in the drinking water.

“Drinking the water can result in stomach cramps, diarrhoea, nausea and vomiting which is an acute health risk,” said Outa operations executive Julius Kleynhans said in a statement. 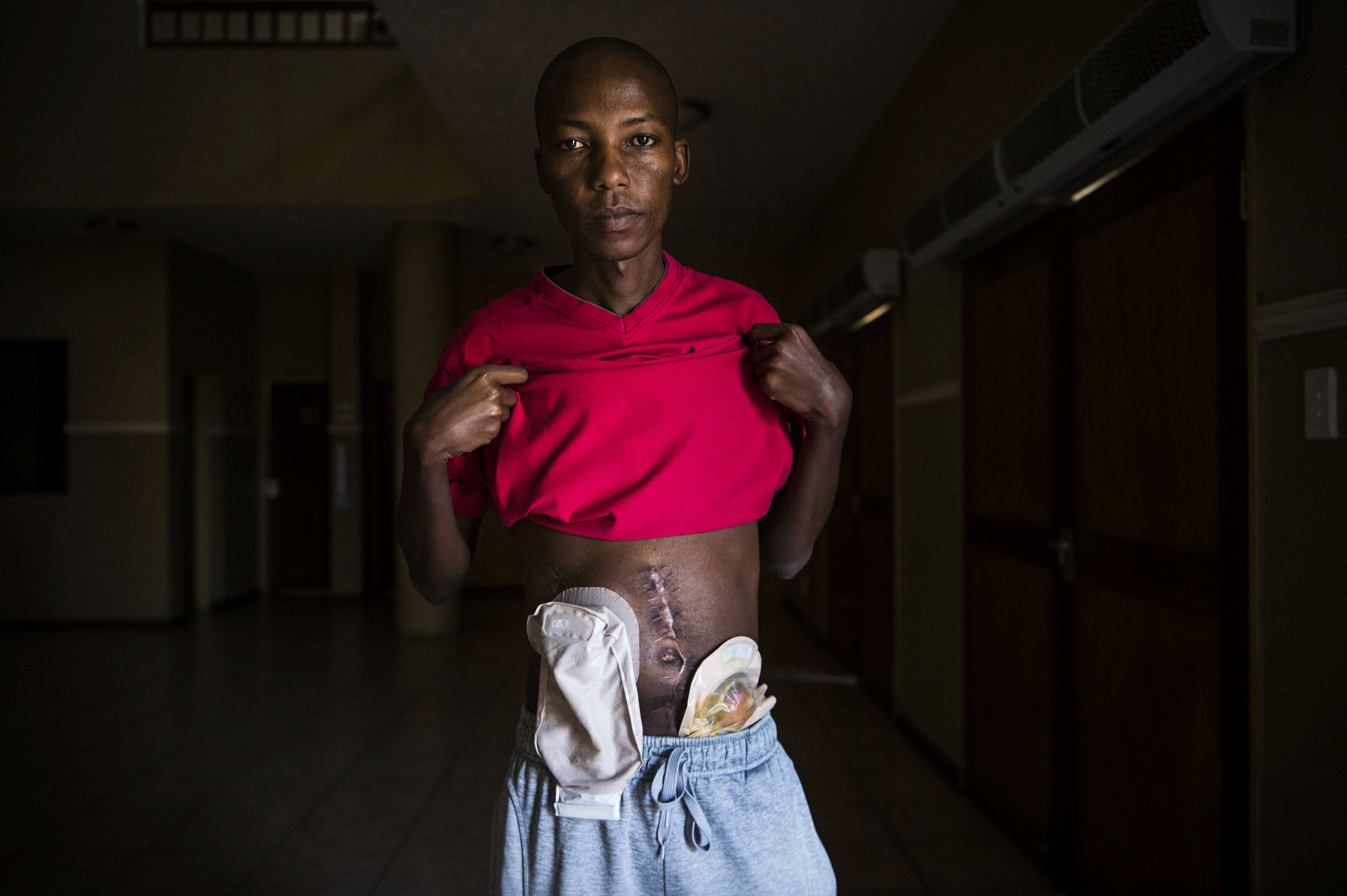 Tshepo Selemale, the cousin of Tebogo Rapodile, also had to have surgery for stomach ailments. She blames the water in Hammanskraal as well. (Delwyn Verasamy/M&G)

According to CSIR’s report, nitrates can cause chronic health issues.

Residents of Hammanskraal are afraid to drink water from their taps, which means many spend hundreds of rands each month buying bottled water. At the same time, people are still paying for the water piped to their homes.

“We end up paying for something that is not appropriate. The water in Hammanskraal is not something you can live with,” Rapodile says. She talks with her hands, the remnants of pink nail polish catching the late afternoon light.

Rapodile says she spends R250 a week on bottled water, which she uses for drinking and cooking for herself and her seven-year-old son.

“It is a strain because you cannot have R250 for a back-up to buy water. With that money you could buy food. So imagine if you cannot afford it,” she says. 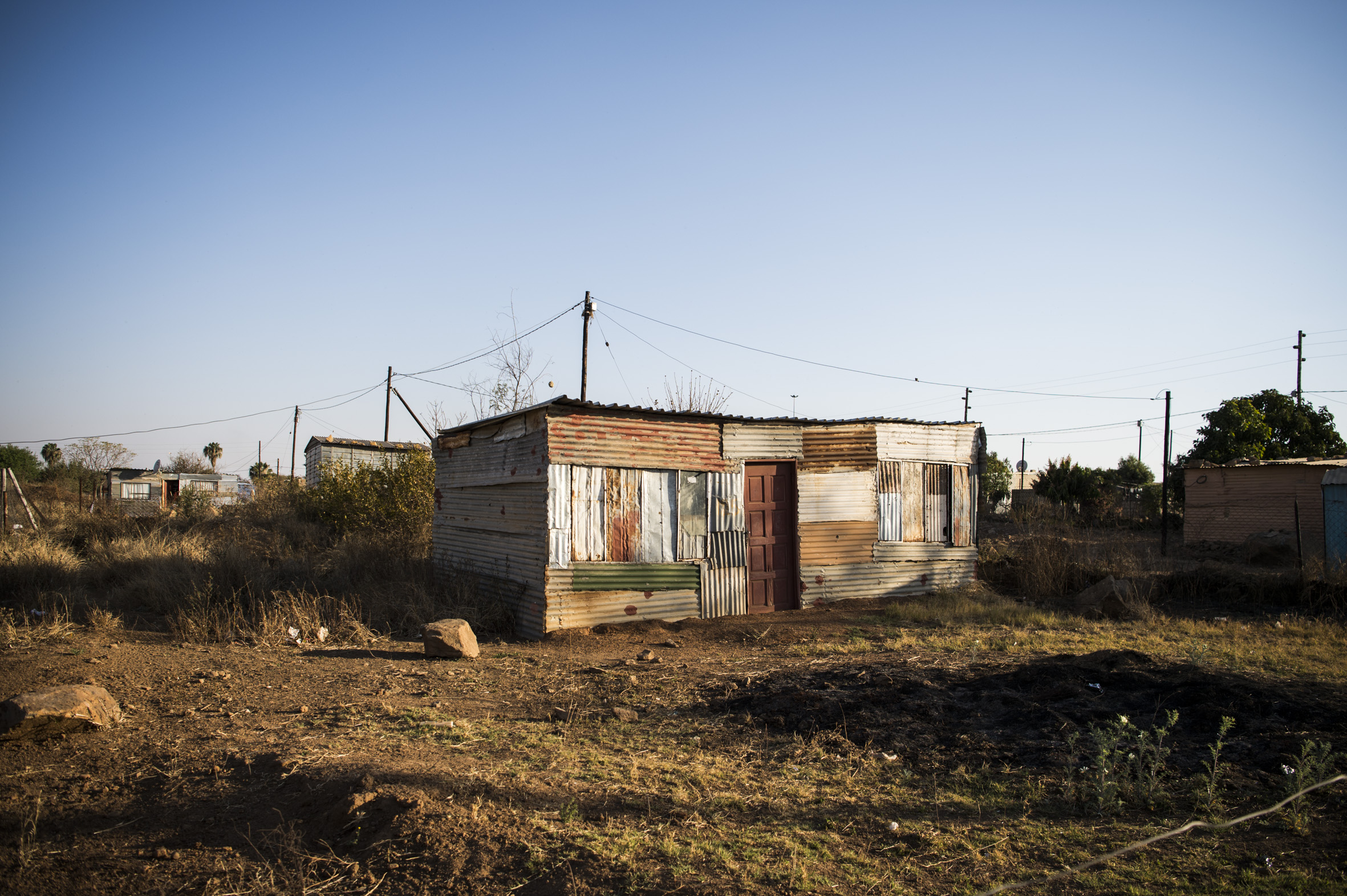 Last week the water there was declared unfit for human consumption in Hammanskraal. (Delwyn Verasamy/M&G)

Boipelo Maboa says he relies on “good Samaritans” to pay him to clean their cars while they do their shopping at Temba City.

As he hastily wipes away a thin layer of dust from a silver Toyota Camry, beads of sweat collect around the tufts of facial hair on his cheeks. The heat and dust of late winter means there are a lot of dirty cars.

He points to a man loading 10-litre bottles of water into his bakkie. “You can see that guy there, he went to buy water. You buy water for R20, for 10 litres. Water from the tap you use only for laundry and to wash dishes,” he says.

“If you cannot afford it, some they just drink. They just drink the water from the tap and they get sick. Some of us are forced to drink it. It’s R20; the price of two loaves of bread.”

Maboa, whose uncle in Pretoria brings him 20 litres of water each week, says it is unfair that people still have to pay the municipality for water that has been declared unsafe for consumption.

“We pay each and every month. And I am living with my granny, she’s a pensioner. Out of the pension we take out maybe R500 and give it to the municipality … Each and every month the invoice comes. And it is expensive.”

“We are paying for this dirty water. And you still have to go and buy clean water. It is not fair.”

Maboa reads the slogan of the City of Tshwane, embroidered on his blue overalls: “‘City of Tshwane: Igniting Excellence’. But there is no excellence. They are not helping at all.” 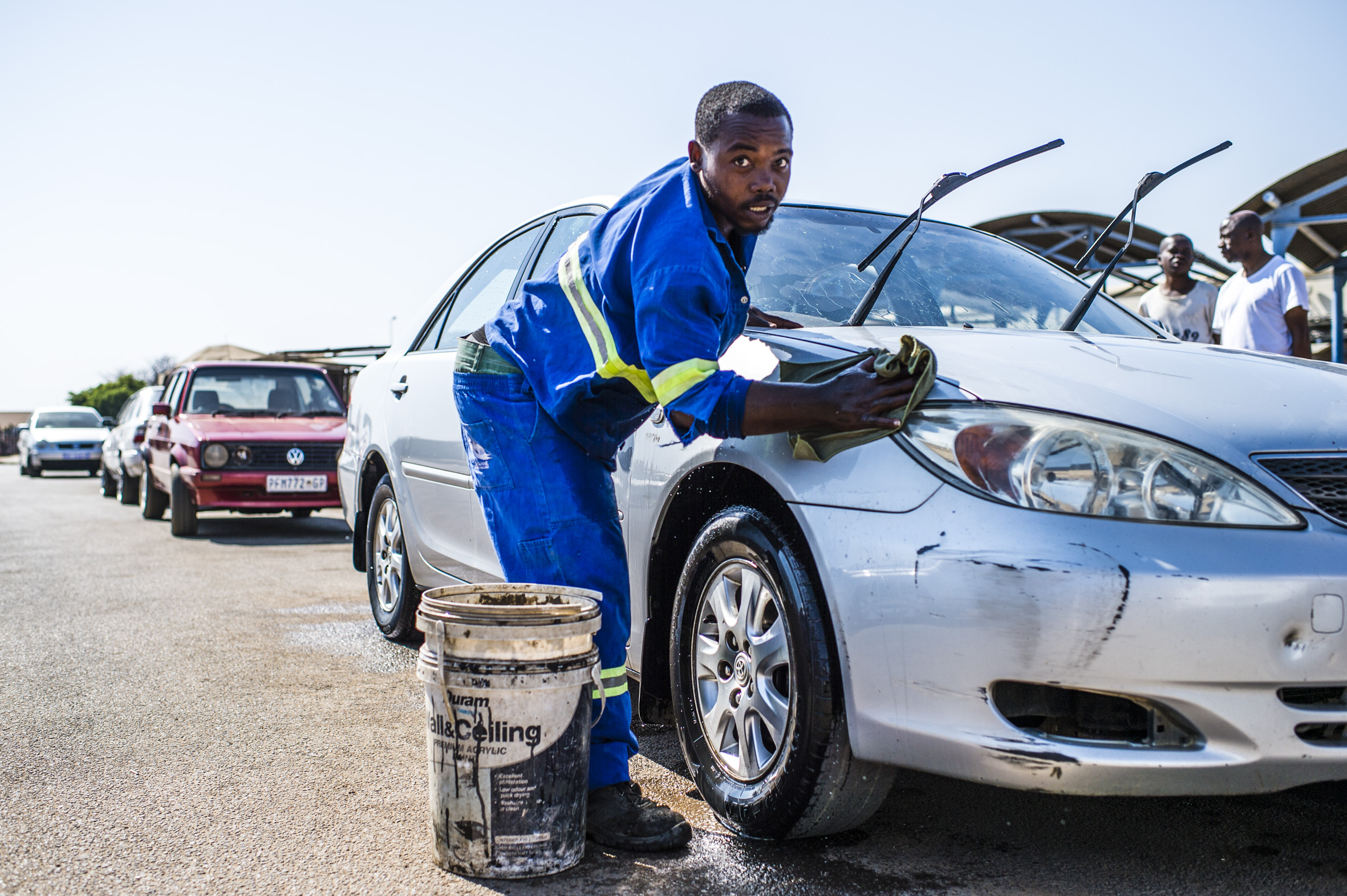 The chair of the Hammanskraal Residents’ Forum, Tumelo Koitheng, says they have written to the mayoral committee complaining about the bills. “Every month we get bills, but we buy water almost daily. And there are those who can’t even afford to buy bread, ” Koitheng says.

He spends R640 each month on bottled water.

In a statement, before the announcement of CSIR’s findings last week, City of Tshwane MMC for utility services Abel Tau reiterated that “the city remains committed to providing quality services to all, including the communities of Hammanskraal. It is imperative that a common understanding and approach be forged in engaging with the affected communities.”

Tau did not respond to the Mail & Guardian’s email and phone calls requesting further comment.

Koitheng says most of the houses in Temba are owned by pensioners. “They are always scared. Because some think their houses will be taken because the city sends them final letters of demand. And for pensioners that is a scary thing.” 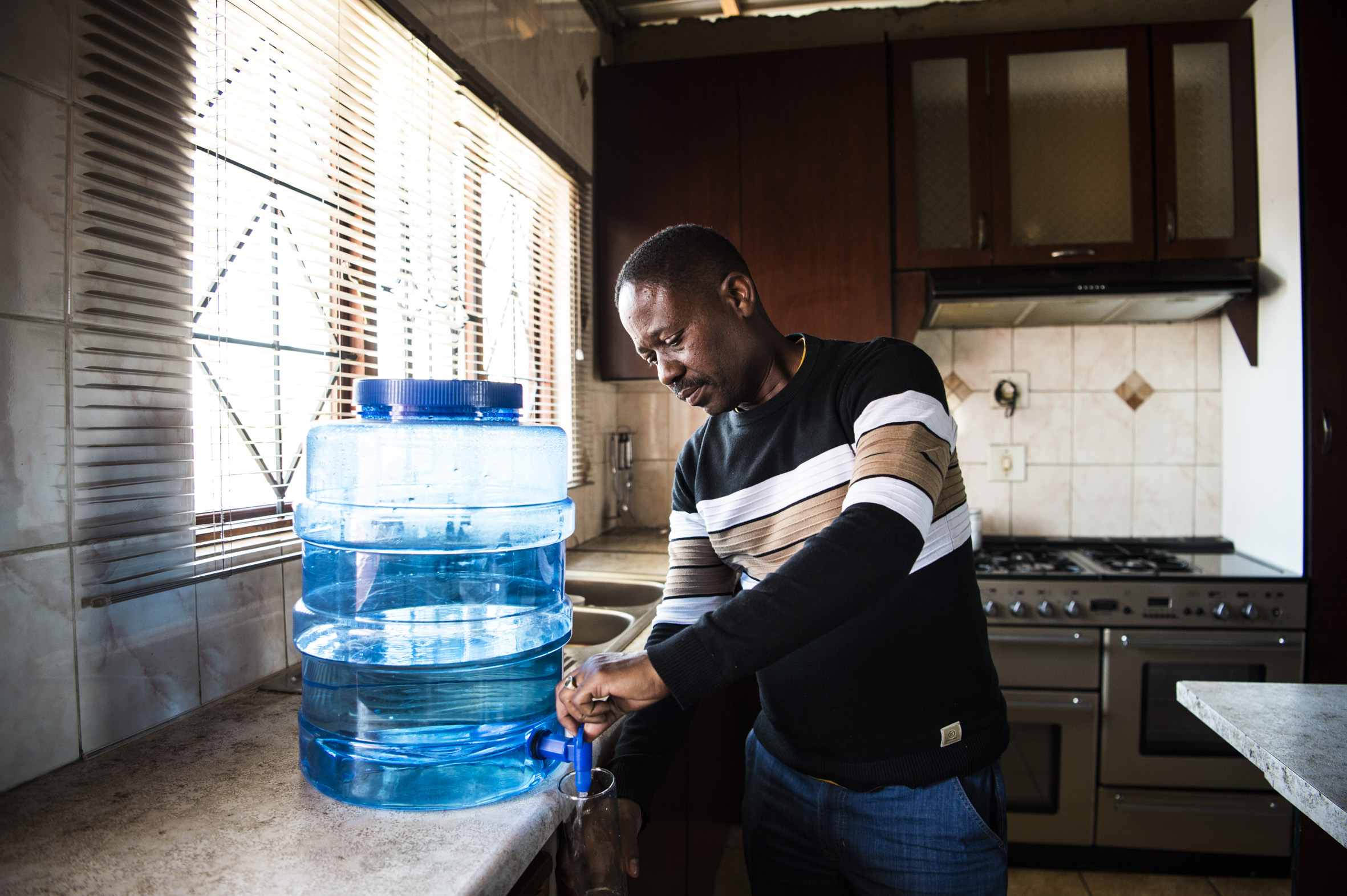 Double bill: Tumelo Koitheng, of the residents’ forum, says he is fighting the fact that they have to pay the municipality and buy their own water. (Delwyn Verasamy/M&G)

Azanian People’s Liberation Army veteran James Mutle uses the money from his social security grant to pay young people to chase down the trucks that deliver water to residents.

“It is a form of a tradition that we always have to run after these trucks that bring water,” the 82-year-old says, sitting at a table in his back garden.

“When they just stop by here, making great noise by hooting (to let us know that water is here), then we just have to rush out. Because we must have water.”

Mutle, who has lived in Hammanskraal since 1967, says he has been made “uncomfortably” ill by the water in the municipal taps.

“During the day there comes a point when I feel like just sleeping for a long time,” he says, his blue eyes darkening.

He says he only drinks the water when he cannot afford to buy bottled water. The water has to be boiled before it can be used, Mutle says.

“The situation we are in is demoralising us. At worst, it is making us queue for death,” he says.

Rapodile winces when her cousin, Tshepo Selemale, lifts his red polo shirt to show her his own scar — a thick line which snakes upward past his belly button, cutting his abdomen into hemispheres.

Stuck to Selemale’s right side is colostomy bag, a souvenir of his colectomy, a surgery performed to stop the spread of the cancer in his colon.

Rapodile remarks that Selemale has put on weight, but his slim frame is too weak to stay standing for long.

Selemale used to work as a driver, but his condition means he is out of a job. “It hits me very hard when it comes to making money. I can no longer work. You can see how I am. I am in pain now as we speak. I am always resting,” he says.

He suspects the cancer was caused by the water in Hammanskraal: “I am a water drinker. I drink tap water because you just get it here in the taps. So I drank a lot of it.”

Selemale struggles to put how he feels towards “those responsible for giving us the water”. “When you say you are angry, but at the same time you feel like tears coming, you don’t know if it is anger,” Selemale says, his eyes downcast. “I nearly died. So I don’t know. Maybe for a lack of words it is anger. But really I am sad.”