The ups and downs of drug-delivering drones

From the Ganges River to Ghana, drones are delivering vaccines, HIV tests and blood transfusions around the world and cutting waiting times for life-saving healthcare. But is all that glitters really gold when it comes to the next big thing in health?

It’s a rainy evening at New Tafo Government Hospital, about 100 kilometres north of Ghana’s capital Accra. Outside, patients are queueing up for services. Mothers coo crying babies and families huddle under the hospital’s overhang, trying to stay dry.

Suddenly, a low whine cuts through the night air.

As it gets louder, a small white drone appears on the skyline. It circles the hospital a couple of times, then swoops in. The drone’s cargo bay opens and out falls a cardboard box attached to a small parachute.

The package bobs towards the ground, landing gently near the feet of George Appiah, the hospital’s medical laboratory scientist. As he scoops it up to carry it inside, the drone is already skyward again, heading back out into the horizon.

A year ago, this scene might have drawn confused glances, or even worry, from patients here. Now, these emergency deliveries of blood and vaccines by drone are a twice-a-day occurrence, and no one bats an eye.

“This service is excellent,” explains the hospital’s medical Kobena Wiredu. “Our roads are not good and, for emergencies, we have insufficient… refrigerators to store vaccines and blood.” 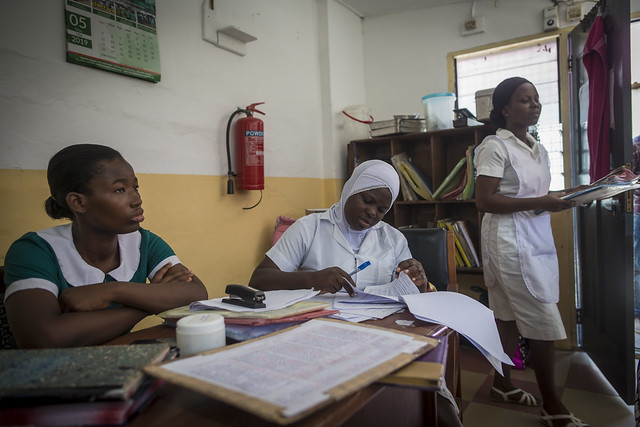 Tafo Hospital is part of a new programme set up by the Ghanaian government and the for-profit American logistics company Zipline, which provides drone delivery of blood transfusions, antivenoms, and certain vaccines to eight health facilities in Ghana’s eastern region.

But Ghana is only the latest country on the continent to give drone-delivered healthcare a go.

Before its drones — which the company prefers to be called “zips” in an era of drone warfare — hit West African skies, they’d already touched down in countries such as Rwanda and Malawi.

In Malawi, Zipline signed up to take part in one of three drone testing corridors piloted by the United Nations Children’s Fund (Unicef). The dedicated airspaces there as well as in India and Kazakhstan are aimed at seeing how well the flying machines can deliver everything from vaccines to emergency medical care, the UN agency says.

Earlier this year, Unicef announced it will launch a third such corridor in Sierra Leone and that Namibia is also considering joining the pack.

In Rwanda, the aeroplane-like Zips has reduced the time it took to get emergency medication and blood transfusions to patients from weeks to hours since it started working in the country in 2016, the company told The New York Times in 2016.

But in Ghana as in elsewhere, drones aren’t just answering questions about how to tackle healthcare challenges in low resource settings. They’re also raising new ones too – particularly about the role of high-tech solutions in addressing health issues that are, at their root, decidedly low-tech problems — and if countries can afford them.

The zip project in Ghana eventually aims to connect 500 health centres to drone delivery systems, according to Zipline. But during parliamentary debates about funding Zipline in December, opposition MPs called drone delivery a “high tech vanity project” that wouldn’t address the root causes of health inequities in the country, such as poor infrastructure. The Ghana Medical Association, meanwhile, called on lawmakers to suspend the deal, arguing that it was pointless to invest in drones before medical personnel.

In 2017, Ghana had about two medical doctors for every 10 000 people, according to the World Health Organisation.

Instead, “we are here to complement the government medical products supply system, especially in emergencies,” says Siaw Nyanor, a flight operator for Zipline. The company’s work, he says, is a “form of first aid reaction.”

The second an order comes in, the facility flies into motion. Inside Zipline’s small pharmacy, employees process the order and pack the cargo — usually a single bag of blood or a few vaccines or anti-venoms, lined by ice packs — into a small padded box. Then another team quickly assembles a drone from an assembly line of bodies and wings hanging on the walls.

Less than 10 minutes later, the zip slingshots down a short runway and into the sky, bound for a health facility.

Currently, Zipline launches about 15 deliveries a week from Omenako, but says it hopes to make that it can make that number of deliveries daily once health workers are better trained in placing orders.

Ghana’s government has signed a four-year, R182-million deal to establish four distribution centres across the country. Zipline does not disclose the cost of each delivery, but public relations head Justin Hamilton says costs are “on par” with conventional delivery services and “we expect those costs to go down as we scale to serve every human on the planet.”

But without clear figures from the company, those statements are impossible to verify. And opposition lawmakers, the Ghana Medical Association, and local think tanks have also raised concerns that the deliveries are significantly less cost-effective than they claim to be.

Zipline itself, meanwhile, is now valued at R18-billion, and will expand its for-profit drone delivery operations into the United States later this year.

In Malawi, the government, technology company Matternet and Unicef partnered to see how well four-propellered drones might work to deliver the infant blood samples needed to diagnose babies with HIV.

Standard HIV testing only detects the presence of HIV antibodies or proteins produced by the body in response to HIV infection. Babies born to HIV-positive women inherit these antibodies from their mothers, regardless of whether or not the newborns have HIV. Because of this, specialised tests are needed to screen infants for HIV.

Only nine labs in Malawi have these kinds of diagnostics, meaning it takes about a month to get the samples — collected on special paper — from rural clinics to the labs and back to anxious moms.

So Matternet took to the skies to see if its drones could do this as cost-efficiently as the current motorbike courier system in the country’s capital, Lilongwe. The Unicef-funded research looked at four scenarios: How well it worked to have drones and bikes collect these blood samples from multiple clinics before looping back to the lab. Secondly, what happened if drones and bikes did this and also collected an extra kind of test known as an HIV viral load. This kind of test measures the amount of HIV in a person’s blood to determine if they are doing well on treatment.

Researchers also asked what would happen if pickups were limited to a 25-kilometre radius and finally what it would mean for cost and efficiency if the drones and bikes collected samples for the two tests from one clinic at a time before returning back to the lab in a “hub and spoke model”.

The 2016 study found that in all four scenarios, the per kilometre cost was higher when drones were used than for the motorcycle-based system. It was the same when total transport-related costs were calculated for every situation except when bikes and drones were only picking up one type of test within a 25-kilometre radius. In that case, the total costs of running the drones were 15% less than the bikes because the airborne machines could take the shortest route, cutting transport time and related vehicle and staff-related costs.

Whether deliveries were made by bike or drone, vehicle-related costs were one of the biggest factors that pushed up the cost of using the technology. And after talking to, for instance, local mechanics, the scientists found surprising insights.

The price of both the bikes and drones themselves were big factors into how much each system cost but motorcycles tended to have a shorter lifespan than their flying counterparts. This drove up the cost of long-term use of the bikes. And petrol was also at a premium. Running costs were cheaper for drones but the staff needed to operate them — because they needed to be computer savvy — came with a higher salary cost than the bike messengers.

A 2018 commentary published in the American Journal of Health-System Pharmacy pointed out one of the biggest challenges to drone drug deliveries may be the technology itself. Typical four-propeller machines such as those used in the Malawi study can only fly for about 20 minutes at a time before their batteries run out, researchers argue. 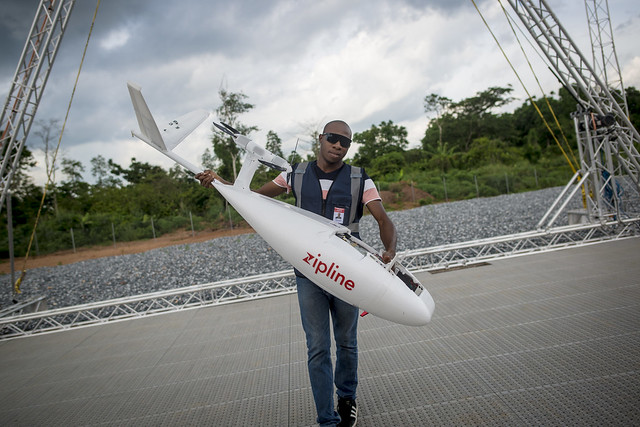 Companies such as Amazon are already looking at ways to solve and as more companies such as the web retailer enter the market, the cost of the technology is likely to drop.

But, of course, there are regulatory frameworks that need to be in place before drones take to the sky with our medicine, they warn. Many countries are late to the game. The United States, for instance, only developed drone regulations in 2016.

And laws like these shouldn’t just be confined to how much the contraptions can weigh, how they are registered or what training drone operators should undergo before being licensed, researchers point out. They also need to regulate the software used to manage drones — and how potentially sensitive patient information is protected.

In Ghana, Zipline’s bottom line may be blurry, one thing is clear. Its drones are fast. By road, the trip between Omenako and Tafo Government Hospital takes more than an hour over rutted roads. By zip, it takes just 15 minutes.

But some critics question whether drones are truly the best way to deliver medical commodities — particularly outside of emergency situations.

It’s one thing to make a small delivery of blood by drone after a crisis like a road accident where every minute is essential. But it’s another to deliver a routine stock like vaccines that can be planned for and ordered in advance, argues technology and public health expert Jennifer Foth in a recent Quartz opinion piece. Governments, she cautions, should think carefully about the value of investing in drones versus less flashy but more sustainable solutions, like better infrastructure and training for hospital staff.

“What I am cautioning against is seeing this — or any— technology as a ‘silver bullet’ and not carefully considering its broader, longer-term impact and sustainability,” she says. “We haven’t considered the true cost of drone delivery medical services in Africa.”

But for those working at the hospitals receiving drone delivery, those cost-benefit analyses are distant and abstract. Instead, they see only the lives the project has saved.

In Tafo, hospital director Wiredu recalls a day last month when a child injured in a serious accident needed an emergency delivery of blood

There was none in the hospital fridge, so the staff ordered a bag of O negative blood from the Zipline distribution centre. Twenty minutes later, it arrived, and a few minutes after that, the transfusion began.

Wiredu says: “Without this, we would have lost the child.”

This story was made possible by travel support from the United Nations Foundation’s Global Partnership for Sustainable Development Data and was produced by the Bhekisisa Centre for Health Journalism. Sign up for the newsletter.