Why Justice Stevan Majiedt aspires to be like Pius Langa

This week, President Cyril Ramaphosa made his first appointments to the Constitutional Court: Supreme Court of Appeal judges Zukisa Tshiqi and Stevan Majiedt. Franny Rabkin sat down with Majiedt to talk about what he learnt from Dullah Omar and his affinity for people from rural areas

There were three brothers named Magiet, who came to the Cape as slaves on a ship from Java in the 1800s. Two stayed in the Cape Peninsula. One moved inland, converted to Christianity and married a Khoisan woman.

“That’s where we come from,” said Stevan Majiedt, the newly appointed judge of the Constitutional Court. “The Majiedts in the Northern Cape and Namibia are descendants from this Khoisan woman and this Muslim slave.”

During the Judicial Service Commission (JSC) interviews in April, Majiedt responded to a question from Chief Justice Mogoeng Mogoeng that, yes, he is one of the First Nations people. But he wouldn’t swing on that to get appointed: “It’s intellectual dishonesty if you’ve never propagated First Nations status, which I have never done … I’m not going to use that now suddenly, because it suits me.”

He won’t be called coloured either. “I hate the appellation coloured. God made me a human being and the Population Registration Act made me a coloured,” he said. “Do not recommend me [for appointment] because I am coloured, please. Recommend me because I’ve got merit and because I am black. I will not be reminded about the National Party making me a coloured just so that I can get a job in the Constitutional Court. I don’t need it.”

His passion on this score gives a rare insight into where Majiedt will not compromise. His overall persona is genial and accommodating. He likes the middle ground. He is warm and friendly, he cracks jokes (funny ones). In fact, in the run-up to the recent JSC interviews, when canvassing views on the candidates, not a single person had a bad thing to say about him.

This is unusual. To get an idea of how unusual, for more than 10 years, at least twice a year, I have phoned lawyers across the spectrum — advocates, attorneys, academics, other judges, different races, ages and genders — asking: “So what do you think of so-and-so for judicial appointment?”

Not once in more than 10 years have I come across a candidate about whom no one had a bad word to say. Until Majiedt.

A good guy, clever and hard-working, was the overall feedback.

His judgment in National Commissioner of the South African Police Service vs Southern African Human Rights Litigation Centre — known as the Zimbabwe torture case — is hailed as a watershed moment in our legal history, in which the highest court would not be swayed by realpolitik arguments when it came to South Africa’s international law obligations.

The case related to a dossier of evidence submitted to the National Prosecuting Authority and the police, which detailed state-sanctioned torture in Zimbabwe, but the police would not investigate it. In a judgment cited across the world, the Constitutional Court ruled that investigations must be initiated.

It was Majiedt’s first judgment as an acting judge of the Constitutional Court. It was also his first international law case “ever”.

“I had to do so much research in that case. I spent many, many sleepless nights on that case,” he said.

The 2014 judgment made little immediate difference in practice — “you feel sort of helpless … It just shows you where the real power is” — but this should not detract from its importance. At the very least, it set the tone for later, when it came to the dramatic face-off between the judiciary and the executive when then Sudanese president Omar al-Bashir — wanted by the International Criminal Court for crimes against humanity — somehow managed to spirit himself out of the country, in flagrant breach of a court order.

Majiedt’s legal upbringing was in the National Association of Democratic Lawyers, the legal organisation historically and ideologically associated with the ANC. He was a founder member “but not a leader, I was a footsoldier”. After graduating from the University of the Western Cape, he became an advocate at the age of 23 at the Cape Bar. There, Majiedt was mentored by Dullah Omar, later South Africa’s first justice minister. He shared the famous fifth floor with Omar, Denzil Potgieter (now a silk at the Cape Bar), Siraj Desai (now a judge) and later Johnny de Lange (former deputy justice minister). It was known as “the UDF [United Democratic Front]-stroke-ANC floor”.

More than 90% of Majiedt’s work was in defending those who fell foul of apartheid laws. When the first state of emergency was declared in 1985, he gave up a Fulbright scholarship to Stanford because Omar had told him that “you can’t go, we need young lawyers to fight in the trenches” and take on the many cases being thrown up by the emergency laws. Majiedt does not regret staying, but he regrets not studying further in later years.

These years influenced his judicial philosophy. “My inclination will always be for the downtrodden, the oppressed, for the little guy. Because that’s how I grew up, that’s what shaped my whole philosophy as a young lawyer,” he said. 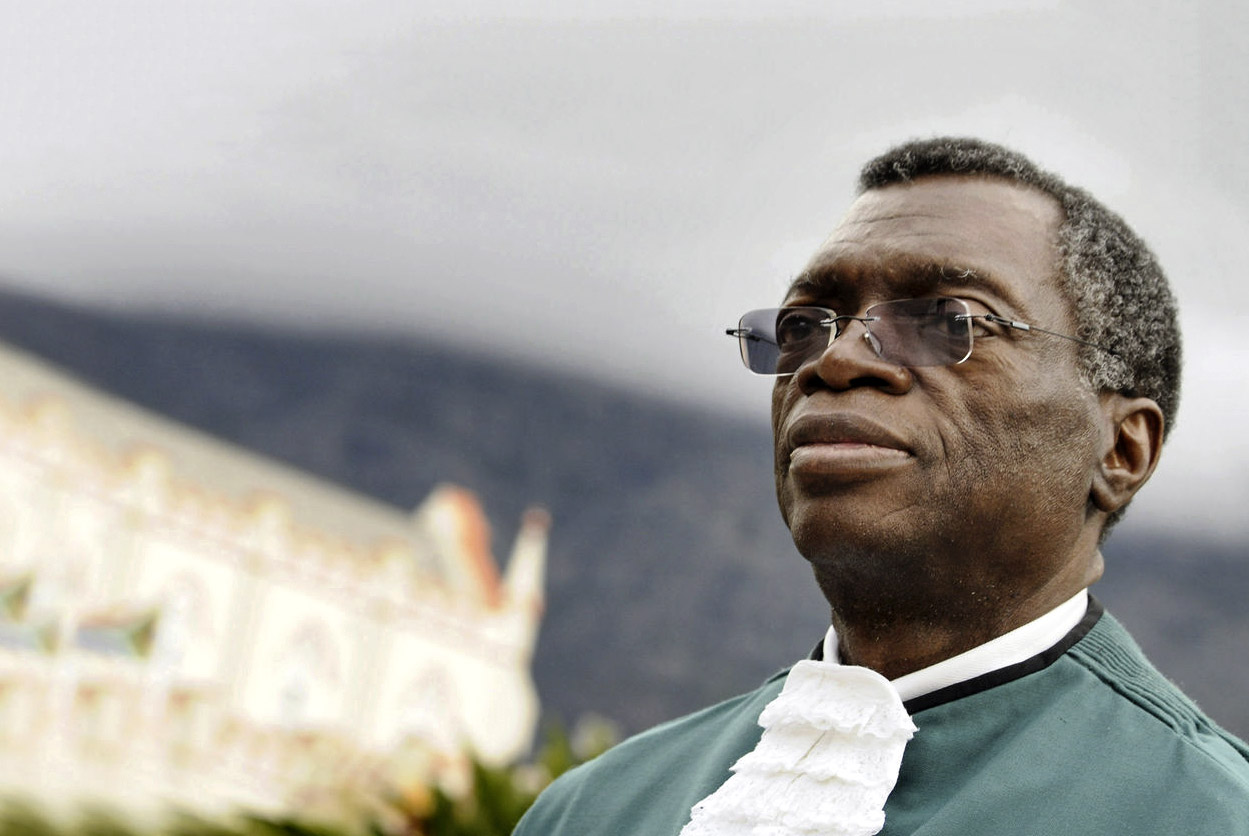 Serving justice: Earlier in his career, Majiedt was junior counsel to Pius Langa (above). He cites Langa as the Constitutional Court judge he would most like to emulate. (David Harrison/M&G)

“With Omar, you learnt more about politics than about law,” Majiedt said. Faced with extremely hostile prosecutors, magistrates and judges, “the one thing he taught all of us is: when you are cross-examining your witness and you know the witness is in trouble, the state witness in these political trials, always watch the clock. Because that witness is going to get a break at 11 o’clock when it’s tea time.”

It is forbidden to talk to someone in the middle of their cross-examination about their evidence. But, said Omar, “You can be sure that the prosecutor’s going to go and whisper in that witness’s ear. So make sure, when you get to 11, you are either finished with the cross-examination or the witness is beyond repair.”

That is why he started out at the Cape Bar. But by 2000 things had changed and he quickly developed a flourishing practice in the Northern Cape, mostly through government briefs. But it didn’t last long because he went to the Bench aged just 39.

Majiedt spent 10 years as a judge in the Kimberley high court. It was tough at first because he had to work harder to prove to the overwhelmingly white, older and mostly conservative colleagues that he belonged there.

It was at that court that he had, much later, a nasty spat with the judge president, Frans Kgomo, when he was overlooked to act as judge president and, instead, Judge Pule Tlaletsi — much more junior but African, was appointed. Majiedt lost his cool — under apartheid he had not been white enough and now he was being treated unfairly because he was not black enough, he said — and sent Kgomo an “intemperate” SMS.

It was not the only row of this nature at the time. In the mid-2000s the principles of seniority — principles akin to the Ten Commandments for judges — were clashing head-on with transformation priorities and there were many similar tensions in the high courts. But despite it being amicably resolved eventually — Kgomo, who sat on the JSC for a time, even said as much in a later interview — Majiedt was reprimanded and the story was made public. The Northern Cape Bench also has a long and troubled history of wrangling among its judges.

But, perhaps because of Google or because of the JSC’s turnover of members, Majiedt is asked about it every time he has been before the JSC since. In April he once again had to explain. He said he did not regret standing up for his rights, but he would have done so differently now.

He liked Kimberley. He also likes Bloemfontein — “nothing is further than 10 minutes’ drive” — where he has been a judge of the Supreme Court of Appeal for the past nine years or so.

The idea of Johannesburg is daunting. He was born in Kenhardt in the Northern Cape — “when you are driving on the highway, if you blink you miss it” — and raised in Barkly West, only marginally bigger, where his father was a school headmaster. “I’m a small-town boy,” he said. Majiedt said this is what most defines him, as a human being and a judge. “I have a lot of affinity and affection for the people in the rural areas.”

He said, after a long pause to think about it, that the judge of the Constitutional Court he would most like to emulate is Langa.

The chief justice was most famous for his humility and impeccable integrity; so famous for this that his incisive legal acumen and foresight has sometimes been underestimated. “When you read his judgments, there is a clarity of thought there. It is not only technically sound as far as the law is concerned, but there is also, throughout — there is a sense that justice must be done in this case,” Majiedt said.

“He was a quiet and self-effacing but when you get down to the nitty-gritty you will see the legal skill is there. For me, if I could just be an iota of Pius Langa, then I will have gone far.”

Recommendations for ConCourt appointments set aside, JSC to conduct new interviews in October