In the shadow of Sasol in Sasolburg is the dilapidated office of the Metsimaholo Labour Forum.

The plant, a behemoth that blows smoke and fire from its many chimneys, is almost as big as the neighbouring Zamdela township, which was built by Sasol in 1954 to house its black workers.

Outside the forum’s office, unemployed workers sit hunched over playing cards. They arrive at 8am and disperse at about 4pm.

Inside, a meeting becomes heated as 20 of the forum’s members discuss the lack of jobs for locals at big energy companies such as Sasol, one of the country’s biggest polluters.

Michael Maphutse sits in the corner of the room between his comrades. A portion of the ceiling above him sags, exposing its wooden rafters. A light fixture hangs in the space like a full moon.

Maphutse has been unemployed for five years.

Statistics, from 2011, show that his situation is not unique — 42.8% of Metsimaholo municipality residents were unemployed in that year — 13% above the national average.

“It puts your dignity down. Just to make an example: I am an old person. I am not working. I’ve got a niece. I’ve got a child. But sometimes I feel like that respect, I don’t find it the way I used to find it when I was working,” the 44-year-old says, his raspy voice making him sound much older than he is. “Because even if I go home. Even if I try to visit, the children are expecting something from me. They are expecting something: ‘There comes uncle. There comes the father.’ But you just look down. You can’t look them in their eyes.”

The forum’s struggle is twofold. Workers say they are regularly turned away by Sasol and its labour brokers, which they say employ migrant workers instead. They also have to contend with the health implications of living and working in close proximity to the pollution that billows from the plant — and from the other industries in this area.

Secretary of the forum, Dikeledi Motaung, explains: “We meet the companies and they say they are complying by providing work to the community … Most of the time you can see there are a lot of outsiders working here at our local industries. Whereas we, as the local community, suffer from this air pollution. It affects our community, not outsiders.”

The forum, which has 12 branches, acts as a middleman between unemployed workers and companies. It represents more than 7 000 unemployed residents in the Metsimaholo municipality, according to its committee members.

“When we go to the companies they just tell us that they are hiring. But they don’t tell us how they are getting the people,” Motaung says as she leans forward from behind the large wooden table at the end of the room, her elbows pointing out at sharp angles. “Most of the people working at Sasol are not locals, they are outsiders.”

According to figures in an air quality report, presented in Parliament last week by the department of environment, forestry and fisheries, Zamdela is one of the areas with the worst air pollution in the country.

Maphutse says residents of Zamdela suffer from shortness of breath, sinus issues, tuberculosis (TB) and eye problems “because of this pollution”.

“And then on the other side, we struggle to get jobs for our people. We are the community here, fighting for jobs and all those things,” he says, the top of his head peeking through his threadbare bucket hat. He inches forward in his chair, his eyes widening.

“But we struggle. We struggle a lot. We have to strike. We have to march to get jobs. It is not the first year, it is not the second year. We’ve got about 20 years fighting with these people.”

Work seekers are subjected to mandatory health testing before they can be employed at Sasol.

Godfrey Manonella, the deputy chair of the forum, says workers who pass the tests and get jobs at Sasol often find that they struggle to get another job because they get sick.

This means that, down the line, workers will be turned away from certain jobs because they are declared unfit. 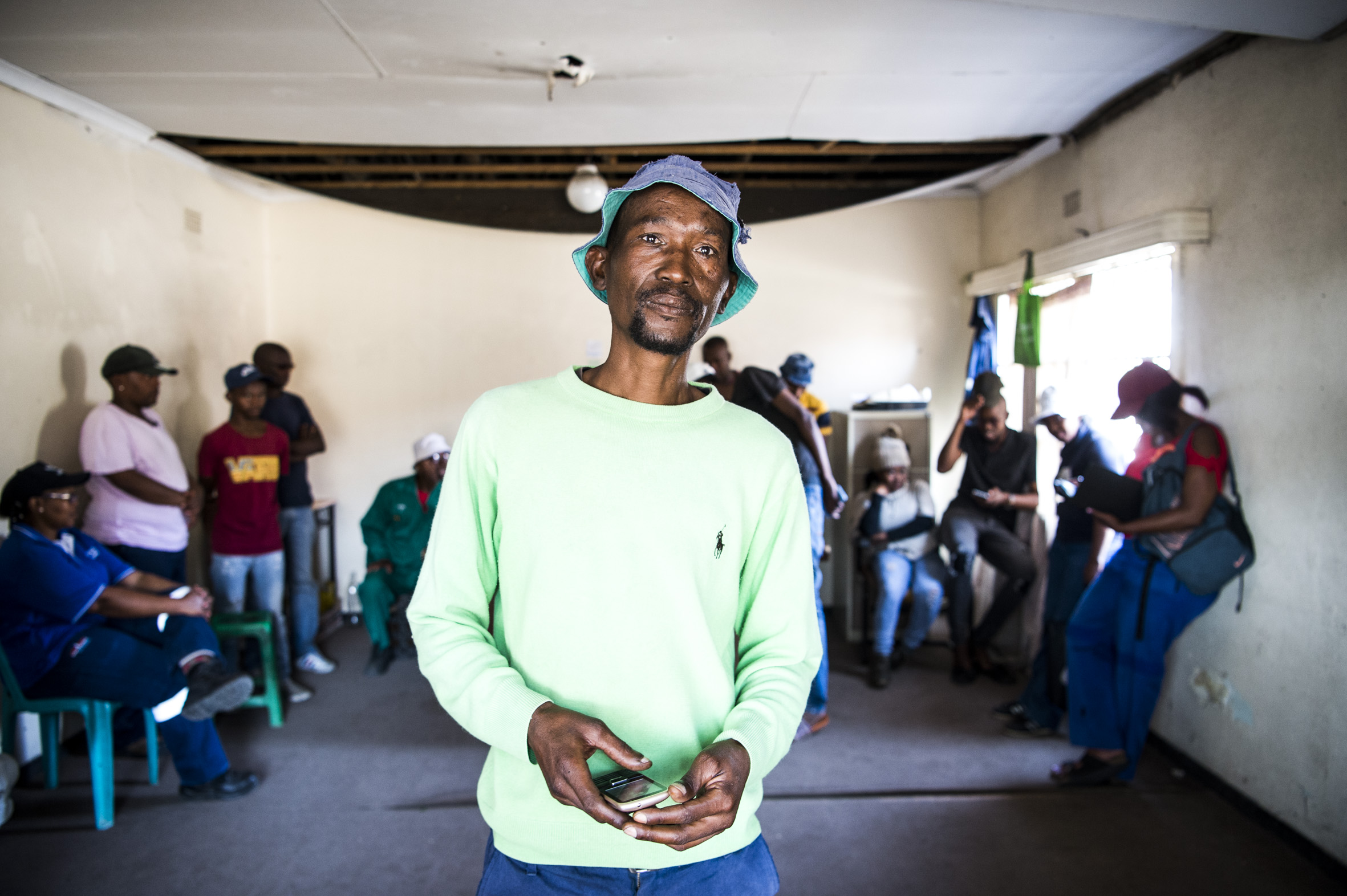 Struggle: Michael Maphutse and other members of the Metsimaholo Labour Forum have marched for jobs with Sasol. He feels defeated and being jobless ‘puts your dignity down’.  (Delwyn Verasamy/M&G)

Manonella says the problem is that the people “running these big industries” don’t understand the people of Zamdela’s problems “because they are not staying here”.

Sasol has failed the residents of Zamdela “dismally”, he says. “Even you can check our office. Look at our office,” Manonella says, pointing to the broken window that looks out on the small garden. A large shard of glass juts out from the window frame like a spear.

“But we still have to say we have big industries here. All we want is to place people in jobs. We don’t want the big billions that are sitting there at Sasol.”

The office was built by Sasol to house the forum more than two decades ago. But Manonella says relations with the company have become strained over the years as protracted engagements with the firm have broken down, resulting in workers marching in protest.

One of the major gripes the forum has is that permanent jobs are not offered to locals, which means that most of those employed at companies such as Sasol are contracted through labour-broking firms. 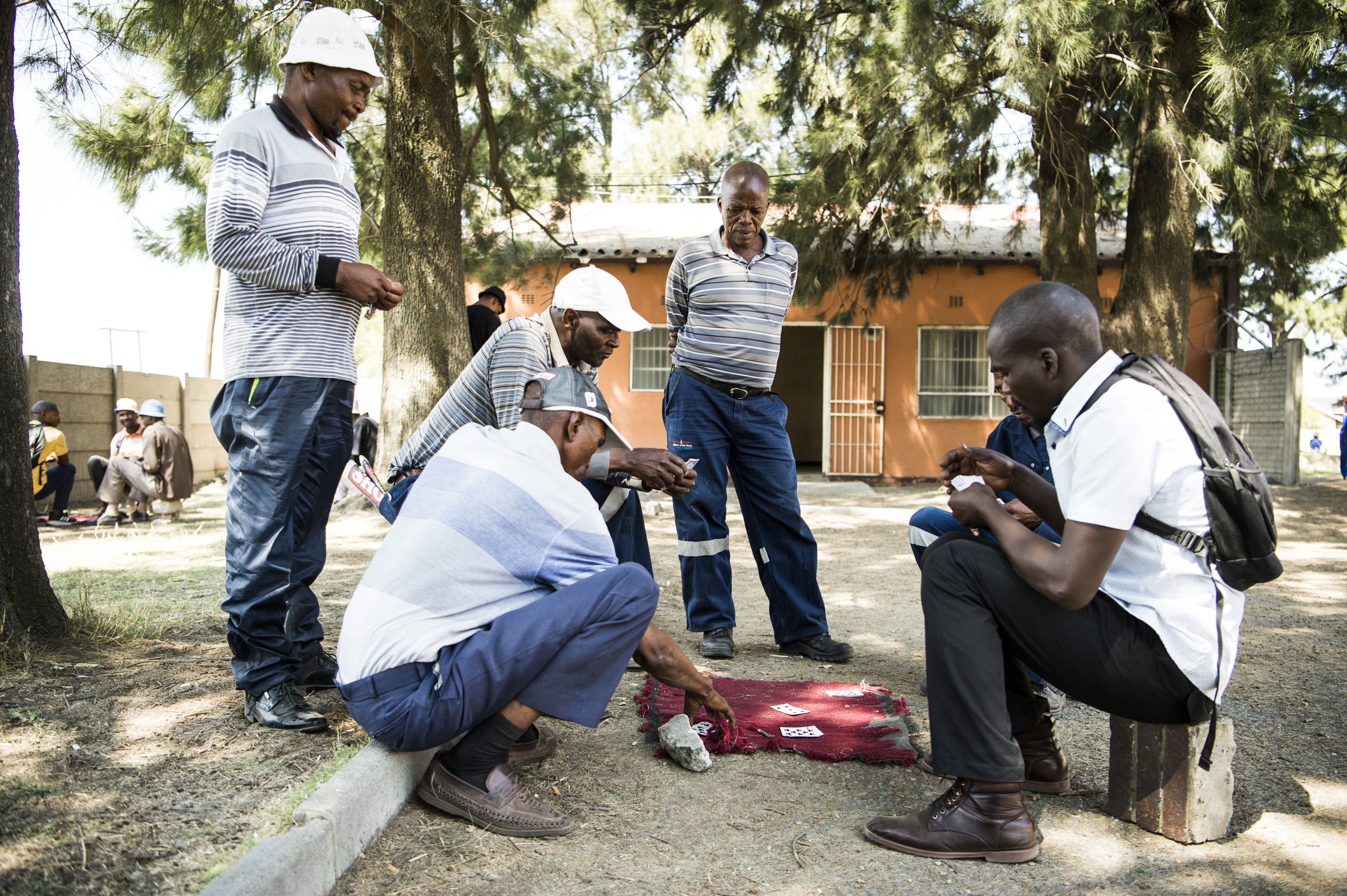 Manonella says labour brokers sometimes withhold the money promised to workers. “And we fight with Sasol. We say: ‘It is you that hired this thing.’ When you go to Sasol, they say: ‘You must go to Cape Town. That labour broker is from Cape Town.’  ”

“Where am I going to get money to go to Cape Town? Who has hired that labour broker? That’s why when we march, we march to Sasol. Because it is Sasol that has hired all these things. I pray each and every day, I don’t want to see all these labour brokers … They just get all this money for nothing.”

In response to questions by the Mail & Guardian, Sasol spokesperson Alex Anderson said the petrochemical company “places a strong emphasis” on providing work to Sasolburg locals.

“To enable local employment opportunities, Sasol requires that recruitment and appointment preference have to be given to local citizens who normally reside within the agreed nearby local communities,” Anderson said.

He added that the company requires its suppliers and service providers — which members of the Metsimaholo Labour Forum referred to as labour brokers — to provide “preferential work opportunities to local citizens who normally reside within the greater Sasolburg area”.

According to Anderson, Sasol contracts seven service providers at its Sasolburg plant. The company employs 5 800 permanent workers in Sasolburg, of which 3 300 live in the area, including in Zamdela, he said. Anderson told the M&G that a centralised Sasol team manages the company’s service providers “through clearly defined contractual requirements they must meet, which includes strict adherence to applicable labour legislation”.

Anderson added that candidates who undergo medical examinations in the recruitment process are not “automatically successful in being selected for a position”.

“Unfortunately, there are more candidates that undergo screening as part of the recruitment process, than there are positions available,” he said. “This is particularly relevant where there are possibilities that candidates either do not pass the medical examination or do not meet other non-medical related recruitment criteria.”