The institutional form of the modern African university did not derive from precolonial institutions; the inspiration was the colonial modern. The model was a discipline-based, gated community with a distinction between clearly defined groups (administrators, academics and degree-seeking students). The model traces its origin to the Humboldt University in Berlin, a new type of university designed in the aftermath of Germany’s defeat by France in 1810. Over the next century, this innovation spread to much of Europe and from there to the rest of the world.

Not only the institutional form but also the intellectual content of modern social sciences and humanities is a product of the Enlightenment experience in Europe. The European experience was the raw material from which was forged the category “human”.

However abstract the category, it drew meaning from the actual struggles on the ground, both within and outside Europe. Internally, the notion of the human was an alternative to that of the Christian. It was a Renaissance response to Church orthodoxy. The intellectuals of Renaissance Europe looked to anchor their vision in a history older than that of Christianity. They found this in pagan Greece and imperial Rome, and self-consciously crafted these into a foundational legacy for Europe.

Externally, it was a response to an entirely different set of circumstances — not the changing vision of a self-reflexive and self-revolutionising Europe, but of a self-assertive Europe, reaching out, expanding, in a move that sought first to conquer the world, starting with the New World, then Asia, and finally Africa, and then to transform and to “civilise” this world in its own image. This dual origin made for a contradictory legacy. The modern European university was a site for the study of the human. In their universal reach for the human, the humanities and the social sciences both proclaimed the oneness of humanity and defined that oneness as sameness — from a very European vantage point.

My point is that the modern university in Africa has little to do with what existed on this continent before colonialism and everything to do with what was created in modern Europe. We may find and study great examples of institutions of learning in the African world before European conquest — in Timbuktu, Cairo, Tunis and Alexandria — but these did not shape the contemporary African university, whether colonial or postcolonial. The decisive influence was the European university.

The African university began as a colonial project — a top-down modernist project whose ambition was the conquest of society. The university was in the front line of the colonial “civilising mission”. Properly understood, this “civilising mission” was the precursor, the original edition of the “one-size-fits-all” project that we associate with the structural adjustment programmes designed by the International Monetary Fund and the World Bank in the 1980s.

Its ambition was to create universal scholars, men and women who stood for excellence, regardless of context, who would serve as the vanguard of the “civilising mission” without reservation or remorse. For those of us who are inmates of the modern university, prisoners in an ongoing colonising project, at least in a metaphorical sense, I suggest we think of our task as one of subverting the project from within, through a series of acts that sift through the historical legacy, discarding some parts and adapting others to a new-found purpose.

The first critical reflection on this colonial project took place in the nationalist movement. From the ranks of the nationalist movement emerged a different kind of intellectual, the public intellectual. If the hallmark of the global scholar was excellence, that of the public intellectual was relevance. Excellence was said to be universal, measured without regard to context; yet relevance was necessarily contextual and place-specific.

The contest between the two unfolded on two very different campuses in East Africa.

The different visions were articulated by two academics from the two universities: Ali Mazrui and Walter Rodney. Mazrui called for a university true to its classical vision, as the home of the scholar “fascinated by ideas”; Rodney saw the university as the home of the public intellectual, a committed intellectual located in his or her time and place, and deeply engaged with the wider society. One moral of the story I want to tell is that we should resist the temptation to dismiss one side and embrace the other. However compelling, these contrasting visions were anchored in two equally one-sided notions of higher education: relevance and excellence. At the same time, each contained something of value. Rather than choose between them, I suggest we identify the kernel of value in each through a dialectical approach.

Does place matter, as Rodney claimed? Or do ideas matter, regardless of place, as Mazrui insisted? Obviously, place matters. If universities could be divorced from politics, if knowledge production could be immune from power relations, then place would not matter. But we know that is not the case. At the same time, ideas also matter. If they did not, why have a university at all? This is to say that politics is not all.

The debate began at Makerere University in the early 1960s, on the eve of state independence. The two sides to the debate lined up on familiar ground — one side mobilised in defence of academic freedom, the other called for justice. The first round of change produced resounding victories for the broad nationalist camp, which called for limiting the autonomy of the university, and of the faculty in particular, so as to put an end to racial privilege. They said the university should be national not only in name but also in appearance.

To undermine the disciplinary nationalism and institutional autonomy that propped up the authority of the expatriate staff would not be possible without a strong role for the independent state in higher education. Dismissing academic freedom as a code word in defence of the status quo, they called for state intervention in the name of justice. It did not take long for the terms of the debate to change, and dramatically so.

With the emergence of the single-party regime in Uganda, the university turned into an oasis where the practice of academic freedom allowed free political speech for those who disagreed with the ruling power. Instead of a defence of racial privilege, as at independence, many began to rethink academic freedom as the cutting edge of a critique of nationalist power.

It was in this context that Rajat Neogy founded Transition, a cross between a journal and a magazine, in which public intellectuals wrote for a public that included both the gown and the town. Those who wrote for it included writers such as James Baldwin, Langston Hughes, Nadine Gordimer and Chinua Achebe, and politicians such as Julius Nyerere and Tom Mboya. Transition made possible a conversation that was simultaneously national, regional and global. Paul Theroux wrote Tarzan Is an Expatriate, an understanding of Tarzan and Jane as the first expatriates. Ali Mazrui wrote Nkrumah: The Leninist Czar, an essay on authoritarianism with a socialist tilt, and Tanzaphilia, of which I will have more to say.

In the decade that followed the launch of the Arusha Declaration in 1967, the debate on Tanzania was framed by two critics. If Mazrui was the most important liberal critic of nationalism in power, Issa Shivji was its most important critic from the left. Two of his books, The Silent Class Struggle and Class Struggles in Tanzania, proposed that nationalisation and socialism should really be understood as the language masking accumulation by a new state-based class.

Despite this intellectual brassage, the two institutions — Makerere and Dar — continued along their distinctive paths. The main issue for reformers at Makerere was the deracialisation of the teaching body, whose leading lights were predominantly white.

Newly qualified young academics were promoted under pressure from government-appointed senior administrators. Among these was the young Mazrui: freshly graduated with a doctorate from Oxford, he rose from lecturer to professor like a helicopter in the space of a few years. At Dar, by contrast, the relevance of the curriculum itself was being called into question; there was also a growing demand for interdisciplinarity, especially by faculty who thought disciplinary nationalism was at the root of the university’s being increasingly irrelevant to the larger discussion on social and political ills in the country.

The developments at Makerere and Dar did not take place sequentially. They took place side by side, generating a strong and spirited exchange between two scholars at these institutions: Mazrui at Makerere and Rodney at Dar.

Decolonising Universities: The Politics of Knowledge will be launched at Exclusive Books in Hyde Park Corner on Tuesday October 8 at 6pm for 6.30pm. Educationists Jonathan Jansen, Shireen Motala and Adam Habib will be in discussion with Felicity Coughlan, director of the Independent Institute of Education, as they unpack what a decolonised education means and consider the role universities as social institutions can play in our deeply unequal and divided society. Email [email protected] or call 011 798 0180. 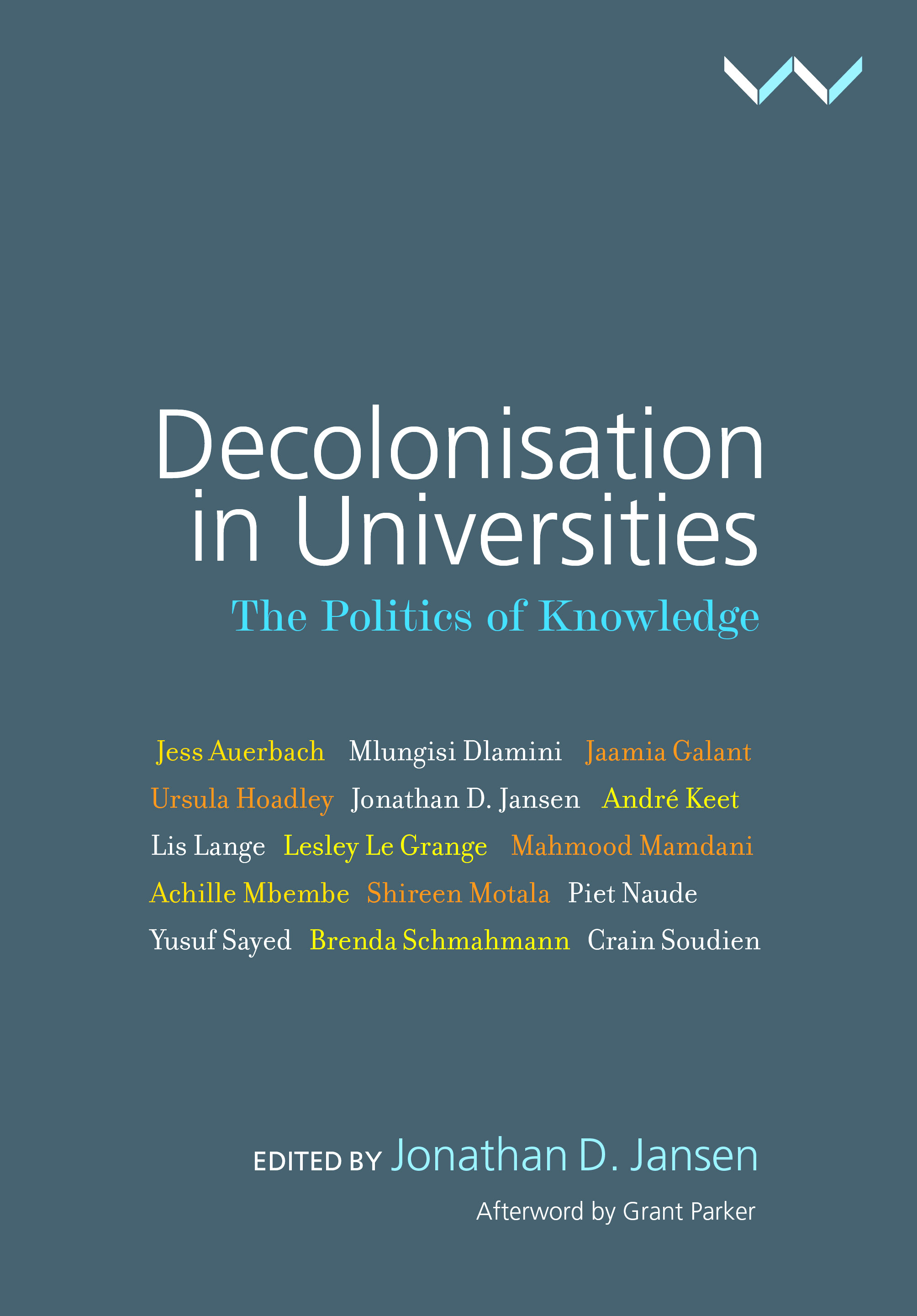