The fourth annual Nation Brand Forum took place in Kramerville, Johannesburg on October 28. An initiative of Brand South Africa, the forum gathers stakeholders from across the board to engage and explore ways in which South Africans can consolidate their common identity. The theme of this year’s forum was Reviving South Africa’s Nation Brand Identity and Narrative.

Featuring representatives from government, media and corporate South Africa, the theme of the forum was inspired by President Cyril Ramaphosa’s remarks during his state of the nation address earlier this year, when he said that he dreamt of “the first new city built in the democratic era”.

“We want the people of the world to fall in love with South Africa,” said Minister in the Presidency Jackson Mthembu. He delivered the welcome address, reminding those in attendance of the numerous sports, arts and cultural achievements South Africans have achieved over the past year alone. “Nothing nurtures a sense of shared national pride better than the country consciously making efforts in nation building activities,” said Mthembu. “All these phenomenal achievements are a manifestation of how far we have come as a young democracy underpinned by a Constitution which has been applauded as one of the most progressive in the world.”

Brand South Africa was established in 2002. Its aim is to create a consolidated brand image of South Africa that will not only foster patriotism, but also market South Africa and its potential for trade and tourism to international audiences. The forum aimed to create dialogue to further bolster this consolidated narrative of South Africa. “Building a nation brand requires that we lean on all pillars of society, from business to government and civil society,” Mthembu reminded those in attendance. 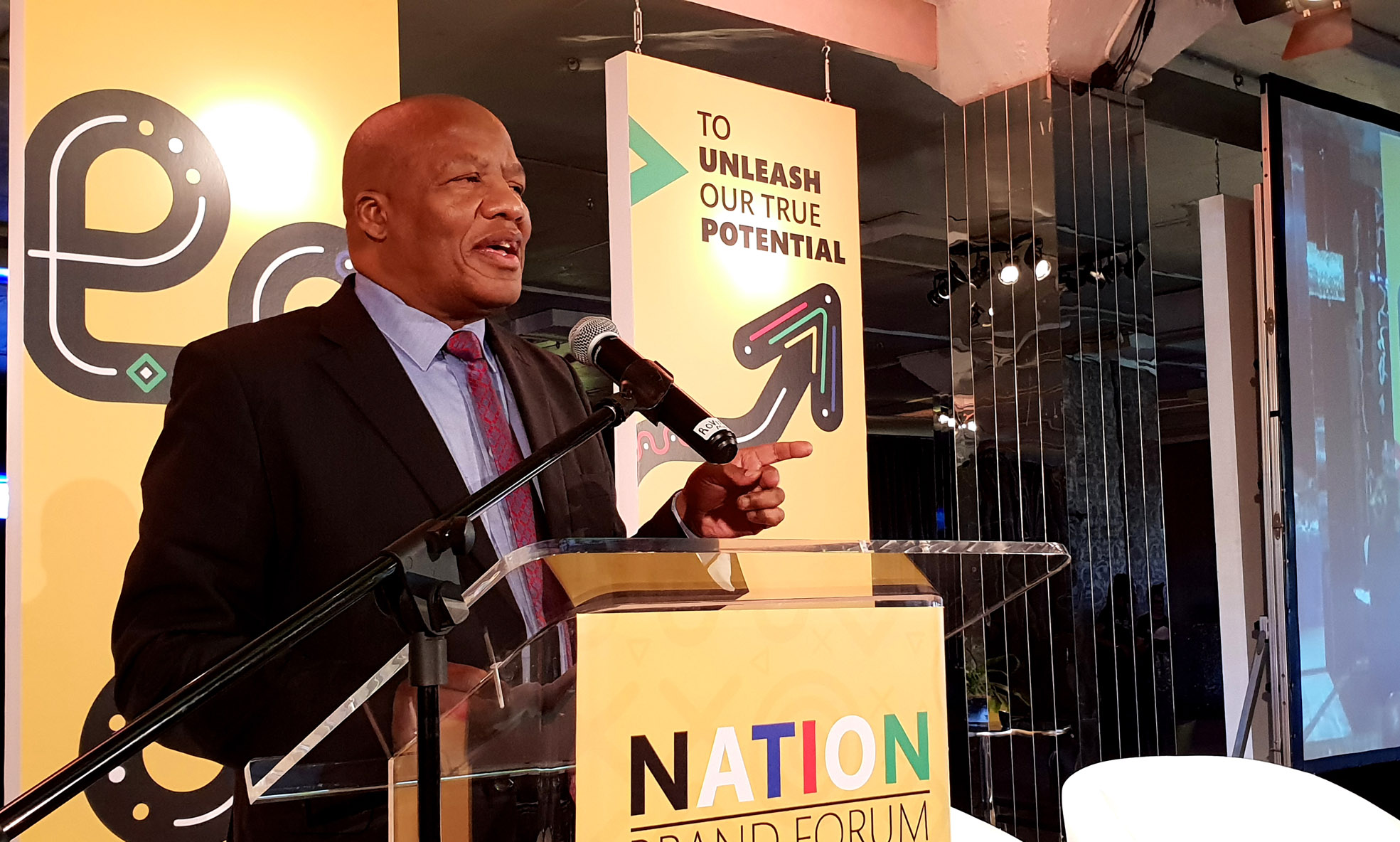 Minister in the Presidency Jackson Mthembu

Founder of Brand Leadership, Thebe Ikalefeng, regaled the crowd with tales of his adventures across Africa. The organisation is focused on building great African brands, and Ikafeleng holds the enviable accolade of having travelled the entirety of Africa. A montage of the beats of Mango Groove, Johnny Clegg, Brenda Fassie and Mandoza, among others, took everyone on a nostalgic journey that had many dancing along, and served as a reminder of South Africa’s rich musical legacy.

Karjieker emphasised the importance of listening to the youth and elevating their voices, as well as the critical role that the media plays in upholding democracy. Morrison highlighted that South Africans can, at times, be elitist: “We need to see ourselves as Africans and not just as South Africans,” she said. For Place, the concept of branding is simple. “Brands are built on two things: what makes you different, and what makes you better,” he said. Kay reminded those in attendance that South Africa is at a point where the country’s story can be told from its own perspective. “We need to steer a narrative that inspires its people and is admired globally,” she said.

Mthembu’s words provide a good summary of the purpose of the event. “Enhanced nation branding is a shared responsibility,” he said. “It is our story to tell, and we must all commit to elevating the nation brand identity at every opportunity granted to us.”