Although it is populated by a sizable ensemble that speaks on behalf of the subject, Toni Morrison: The Pieces I Am, is an intimate, quietly powerful film that invites us to an extended audience with the Nobel Prize-winning author. The documentary, commissioned as part of PBS’s American Masters series, premiered at the Sundance Film Festival in January and will show at the Joburg Film Festival, which runs until November 24.

In the two-hour film, the viewer is afforded a rich perspective through a film that is set around a deliberately unfolding interview; an interview that — in the wake of Morrison’s death in August — is an elegant last testament. The documentary is directed by filmmaker and photographer Timothy Greenfield-Sanders, who first met Morrison when she visited his East Village studio in 1981 for a SoHo Times cover portrait. 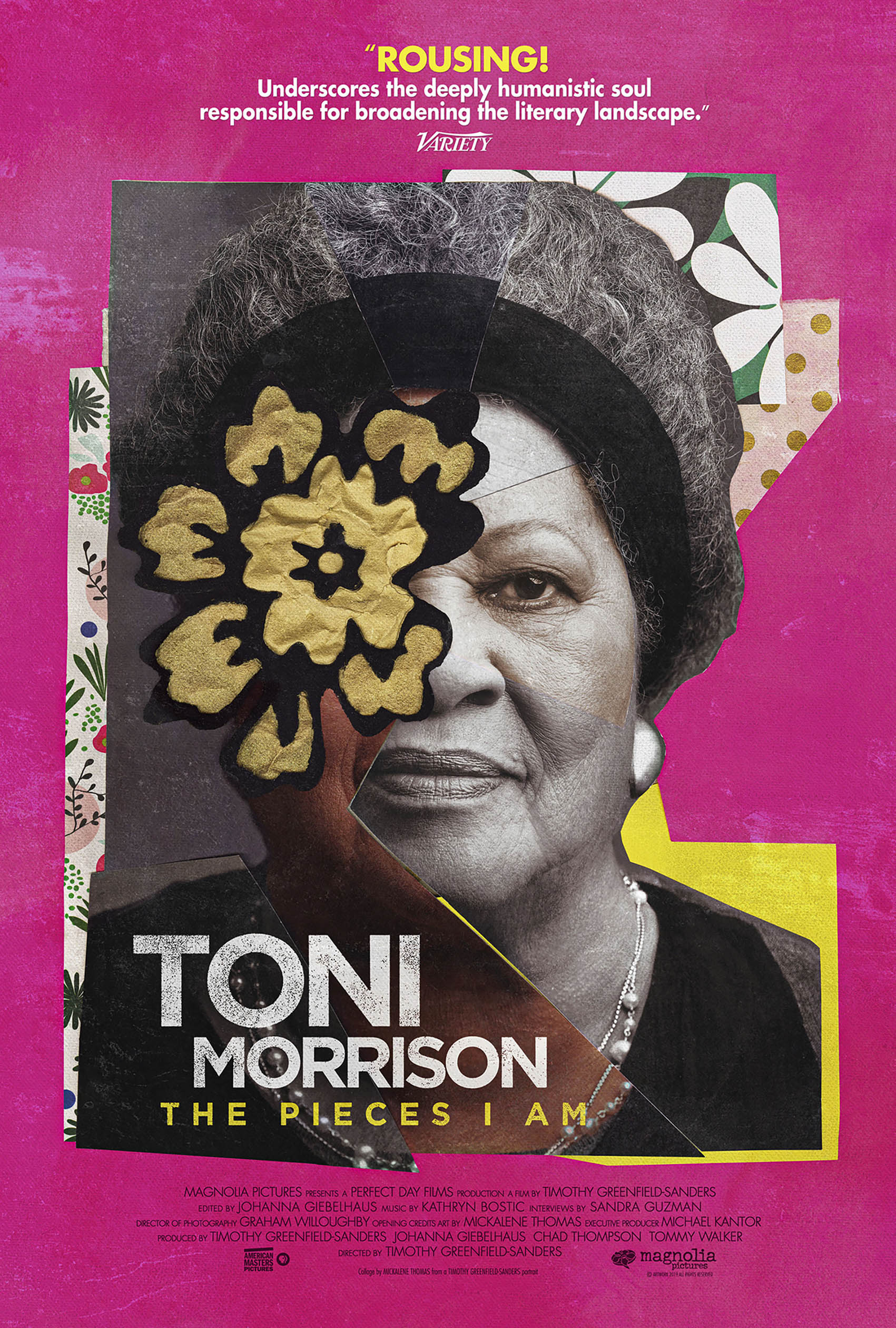 Greenfield-Sanders’s initial impression of Morrison, as told to Mike D of Reelblack Podcast, was that she was an obviously confident, “fully ready to go” sitter, who exhibited no nervousness in front of the camera. A friendship ensued from that first meeting, with Greendfield-Sanders taking many other portraits of Morrison in the ensuing years.

The interview that anchors the film took place over several sessions at Morrison’s home, with other supplementary interviews conducted for clarity later on in the filming process. These sessions, complementary footage, and the cast of speakers help us to construct a biographical outline, even as the film is more concerned with the meaning of Morrison’s creative output than it is with chronology. The additional footage is not merely old film, but a rich tapestry that incorporates several pieces of contemporary art.

In addition to this, the talking heads are so well selected that their contributions come across as vital, each teasing out various strands of Morrison’s foundational raison d’être: writing away from the white gaze.

Among the speakers is literature professor Farah Griffin, who speaks about the transgressive power of Sula (Morrison’s second novel about a friendship between two women). There is Sonia Sanchez, brimming with verve in her trademark tie-dye, who expounds on a fundamental premise of Morrison’s authorial approach: namely writing the difference between reimagining and reinventing.

There is Angela Davis, who opens a window into Morrison’s activist and transformative approach to editing, which she experienced first hand as one of the recruits to Random House, alongside others such as June Jordan and Muhammad Ali.

There is Hilton Als, softly spoken and incisive, speaking of The Black Book (1974), Morrison’s interventionist smorgasbord, as a representation of “the jumble that is black American life”.

Oprah also features, detailing how, in her book club, she had positioned Morrison as the sleeper disturbing the tranquil. Over the course of this film, these and many other speakers contribute much more to our understanding of Morrison as a cultural and political figure.

Hearing Morrison speak so openly of her childhood in Lorain, Ohio, provides a layered context illuminating how some of the characters and the storylines of her books came to be. (A childhood conversation with a friend, for instance, planted a seed that germinated as The Bluest Eye later in life.)

The focus on her professional life, on the other hand, shows us not only an unyielding aesthete always aware of the political import of her positions (as editor and writer), but also a single mother, who, while unashamed to lean on family when she needed to, was determined to work out a rhythm to cohere her careers and role as a mother.

For much of the film we see the striking image of Morrison herself: in archival footage, in still photographs, in homely repose or with her game face on. When she is interviewed she sits facing us head on, exhibiting humour, sensitivity and an unapologetic intelligence.

Morrison’s career was nothing if not prodigious, with more than 10 novels, several nonfiction titles, children’s books, a pair of plays, a libretto and countless essays. In the film, Greenfield-Sanders mostly keeps the focus centred on her trio of 1970s novels — The Bluest Eye, Sula, Song of Solomon — and, of course, the behemoth that is Beloved (which Morrison was initially unsure about turning into a film). Although this approach this gives us a pivot, what is clear is that Morrison transcended literature. Speakers, at turns, allude to this, calling her “the Emancipation Proclamation of the English language” and referring to her as “a literary artist”.

Greenfield-Sanders gives voice to the latter by mapping her connections to other works of art within the African-American canon, specifically contemporary art. Visually he deploys this technique throughout the film to echo the world conjured by Morrison’s books. Titus Kaphar’s Behind the Myth of Benevolence, makes a strong appearance in the film, as do other works such as Kerry James Marshall’s Past Times, Rashid Johnson’s Untitled Anxious Audience and photographs from Gordon Parks’s Segregation Story series.

In the interview with Mike D, Greenfield-Sanders suggests that another function of the talking heads was to speak back to his white gaze, which, given Morrison and the context of her work, he felt compelled to mitigate. Perhaps a consequence of this is that we get a film that is quite reticent to engage its subject critically. We don’t get to hear Morrison defend her work against worthy challenges, or even critically appraise herself. As she herself says, she was quite certain of her superiority over her white male detractors. In Greenfield-Sanders’s framing, then, as close as Morrison may appear, there is the intermittent blur of a self-correcting focus.

The Joburg Film Festival runs at six venues across Johannesburg, with a hub in Sandton (Auto & General Theatre on the Square, a free outdoor area at Nelson Mandela Square and at Ster-Kinekor Sandton City). The other venues are Cinema Nouveau Rosebank; The Bioscope in Maboneng and Kings Theatre in Alexandra, which offers free screenings. For screening times visit joburgfilmfestival.co.za