Digging (for information), exhumation and obfuscation have all become synchronised rituals of postapartheid life in South Africa.

Tshepiso Mabula’s photographic exhibition, Ukugrumba, examines the performative aspects of this ritual, as well as the trauma that is prolonged by its narrow politicisation.

“My uncle [Dimati Simon Mabula] went into exile to join Umkhonto weSizwe [MK] in 1985,” says Mabula. “He had come back by the time I was born. When I think about it now, the way to articulate how he was [mentally] was that he hadn’t dealt with all the trauma that he experienced during that period. He was very depressed. He was drinking all the time. I didn’t know that he had been with MK until after his funeral in 2006. When I was looking for something meaningful to do with my photography, his story was the one that sort [of] came to me and that branched out to me talking to families of former combatants.”

If an air of sombreness permeates the photographs, it is probably intentional. A walkabout at the Market Photo Workshop, where the work is on show, carries the quiet restlessness of a war’s aftermath. Mabula achieves this by following her story to the many corners of South Africa: as far south as Port Elizabeth, where she visits disillusioned former combatant Menzi Buhlele; as far north as Modimolle, where she visits her uncle’s old haunts.

The spaces in between are just as bleak. Mabula follows the story of the Munsieville Four from exhumation to reburial. The Munsieville Four were Pan African Congress (PAC) members who were given the death sentence in 1963 following their murder of a police officer. In Ukugrumba, we see the PAC make a show of the reburial, with a guard of honour rolling through the shacks of Munsieville as some among the onlookers make the open-palm PAC salute. 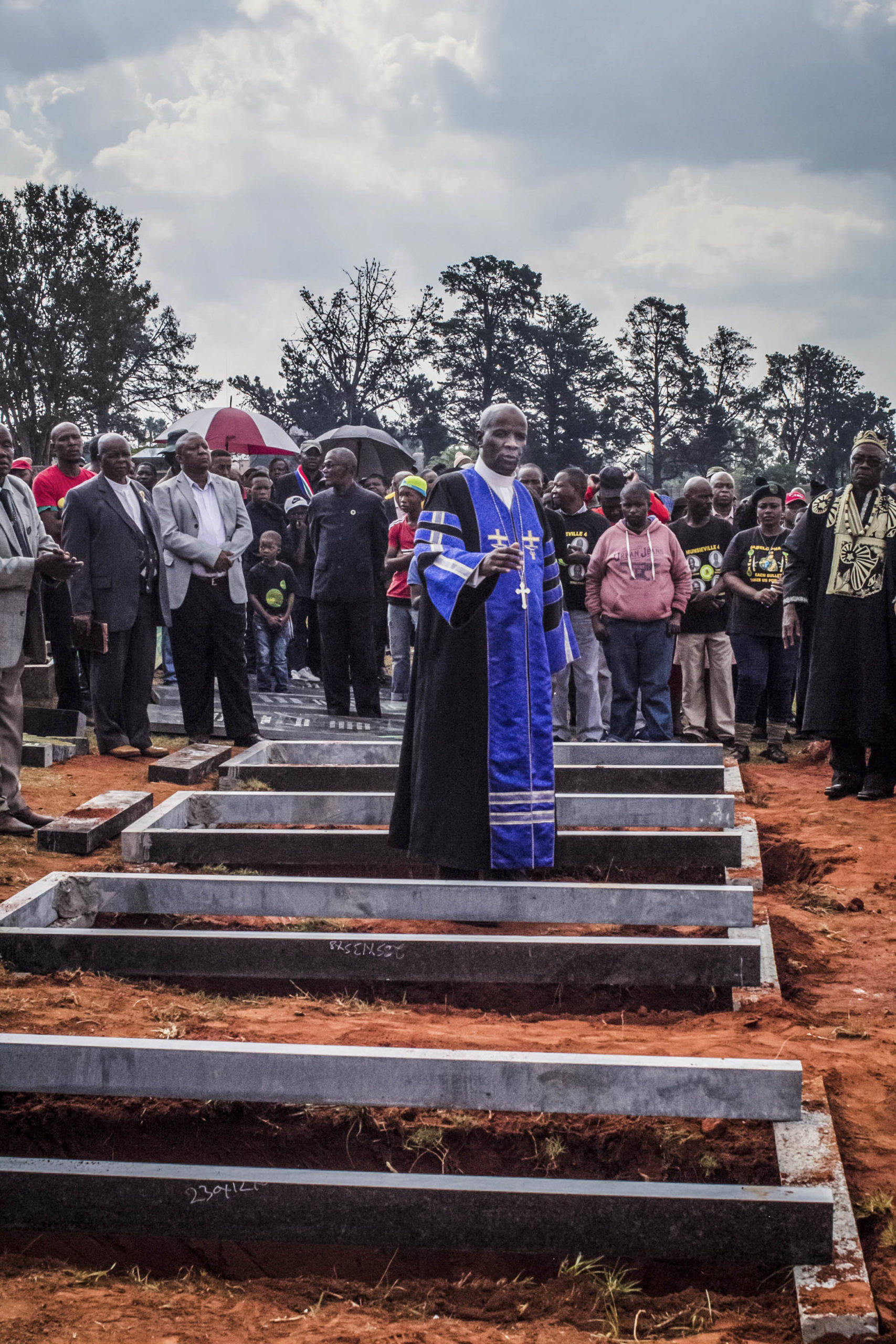 In another beautifully composed image made on the day of the reburial, we see the rear half of a coffin partially draped in a PAC flag. Through the sidelong, rear angle the photograph is taken from, we see the backs, arms and shoulders of three pallbearers and only the arm of a fourth. One man’s bereted head is visible, bent at an angle to accommodate the coffin. There is a militaristic resolve to the manner in which the men have hoisted the coffin onto their shoulders, no matter the story of their numerical attrition. “Munsieville [on the West Rand] remains a strong PAC community,” says Mabula. “I wanted to touch on the erasure the PAC feels as well: how their history had been rewritten.”

At a critique session in Cape Town earlier in the project’s development, Mabula says she had a telling interaction with a former ANC politician, who had been a senior member of MK. “In the beginning I found him very defensive and not really wanting to confront the issues the project was raising,” she says. “As I carried on showing him the work he seemed to open up, but there was a level of trying to protect the ANC specifically from being held accountable.”

In Ukugrumba, one witnesses a photographer grappling with finding a cohesive language to represent various traumatic occurrences like arrest, torture, disappearance, betrayal and remembrance. Mabula also weaves a thread around the experiences of women, a number who participated not merely as appendages to men but as agents in their own liberation.

Mabula turns to re-enactment to deliver the story of Phila Ndwandwe, a young ANC commander who would not break under interrogation, fashioning undergarments out of plastic packets when she had been left exposed for days. In a trilogy of images, we are forced to confront Ndwandwe’s womanhood. 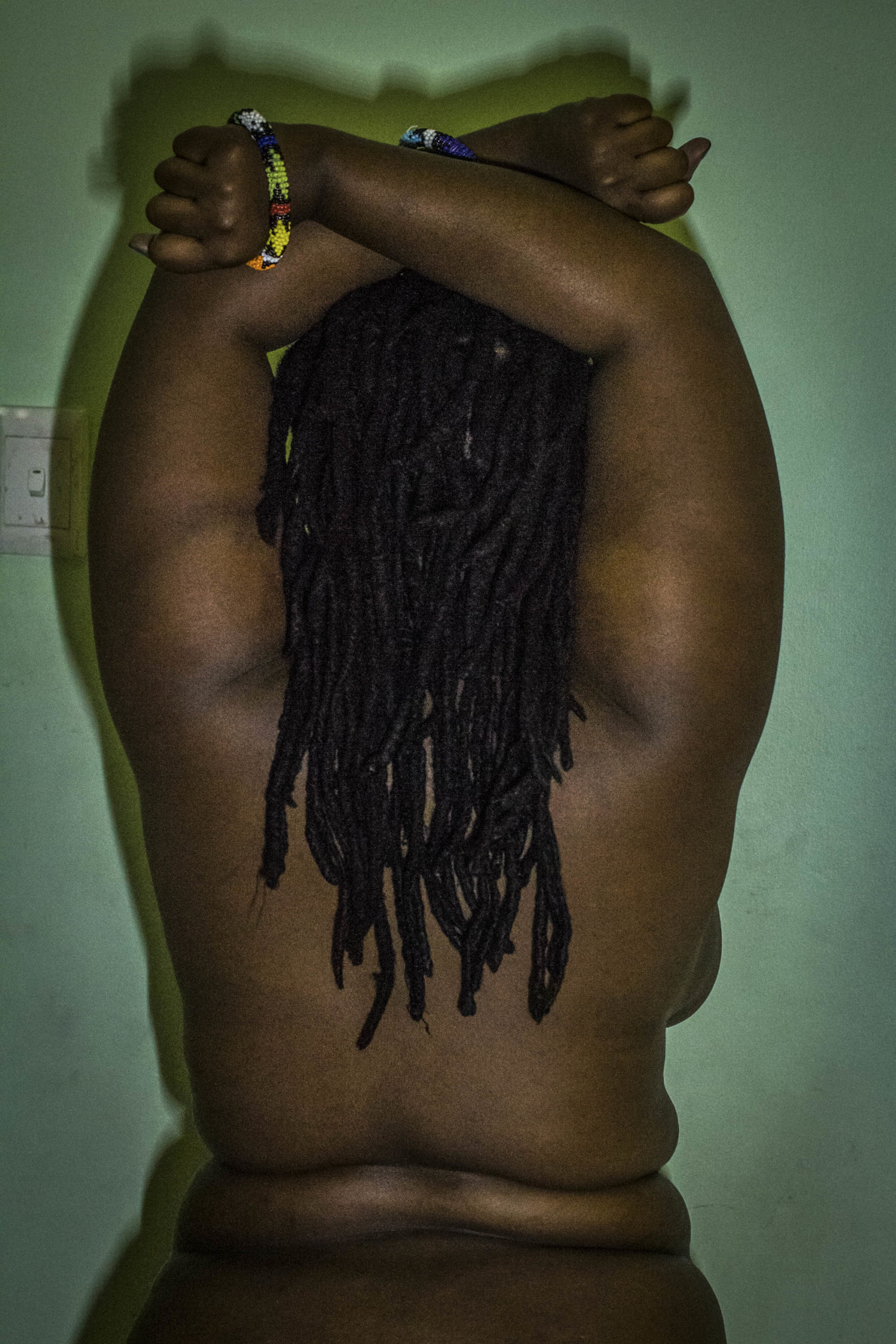 There is the naked upper body of an unidentifiable woman, her hands crossed above her head, evoking Ndwandwe’s torture by her captors. In the next image are the floating plastic remains of what Ndwandwe soon turned into underwear to preserve her dignity. The final image is taken from a wardrobe: a black nightdress and boots, alluding perhaps to her motherhood and her resolve as an ANC combatant.

In Antjie Krog’s keynote address at the Goethe-Institut’s Über(W)unden: Art in Troubled Times conference, she quotes Ndwandwe’s mother, unaware that the secret grave of her daughter lay within 10km of her own home, as saying: “I cannot bear the fact that all these years she was in a grave a mere 10km away from me and I didn’t know that. I didn’t feel that. My previous grief suddenly seems like such a luxury.”

Elsewhere, Mabula seeks continuities between South Africa’s past and present. They are not hard to find. In Sebokeng, she tracks the story of Papi Tobias, who disappeared after participating in a housing-related protest in Boiketlong. She photographs his shack, abandoned since his disappearance: the dishes, cutlery and sink gathering dust. “The dust, I thought that was visually powerful,” she says.

Most things in Ukugrumba seem to return us to the dust. The tavern in Modimolle, where her uncle watched out the remainder of his days, is itself a bowl of windswept desolation. It’s easy to forget that its peeling walls, one boasting a declaration that “Local is lekker” hold the momentary joy of several souls fated to Zamalek-stained oblivion.

Mabula says this is just the beginning of her project. “There is a lot of information that is not part of the everyday conversation, when it comes to how our history fits the present,” she says. “So I am continuing with the work, looking at the people who are political prisoners — how that plays into the conversation around reconciliation.”