I wouldn’t be the first person to write an essay on the sense of identity that meat-based food traditions offer diasporic communities, and the failure of the vegan movement to take that identity into account. But what essays on this subject sometimes miss are the changes that have occurred in meat consumption, as an act, over the past 50 years.

These changes, which are now pitting ethics and identities against each other, can be collected under the umbrella of industrial farming.

To demonstrate the impact of the rise of industrial farming on diasporic communities, we can track the history of one quintessentially traditional meat product – chicken soup – within the traditions of one Ashkenazi Jewish family: mine.

My grandmother’s parents emigrated to England from Lódz in Poland, first living in the East End and then moving to a house in Stamford Hill, where they raised their own chickens in the garden. When the time came, my great-grandmother would take one of the birds across town to the slaughterhouse, wait in line with the other wives and their respective livestock, and then take the carcass home to make her chicken soup.

When meat was a precious once-a-week luxury, soup was the best way to ensure that every bit of an animal was used as much as it could possibly be to help feed the family – which, in her case, meant mother, father, two daughters and seven sons. Nothing was going to waste.

In the Ashkenazi community, as in many other diasporic communities, meat is traditional. For those of us who are second-, third- and fourth-generation immigrants, eating is a way to link ourselves to our roots and histories. And for communities with histories of persecution, food traditions are things of particular emotion purely for the fact that, against all odds, they continue to exist.

Of course, not eating chicken soup doesn’t negate Judaism. Vegetarianism is not uncommon among Jews, and there are a number of Jewish animal advocacy groups, including Shamayim V’Aretz in the liberal community and Behemla for the orthodox. Chicken soup is a cultural rather than a religious practice – which is why I specify Ashkenazim (Jews from Central and Eastern Europe). Other groups like Sephardim (Jews from Spain and Portugal), or Mizrahim (Jews from the Middle East and North Africa), have their own food traditions.

Despite having no official religious links, broadly secular individuals like me often feel the traditions that connect historical religion to contemporary life to be as important, or even more so, than religious practice itself. Chicken soup is a reminder of Jewish life, experience and resilience outside the synagogue, and one that is lived rather than treated as a historical artefact.

The habit continued into my childhood. About once a month on a Friday night, my parents would drive from Hampshire up to my grandparents’ flat in North West London, where we’d have kiddush dinner with Grandma, Grandpa and the rest of my Jewish cousins, aunts and uncles. (Kiddush is the small ceremony of candle-lighting and bread-eating at the start of the Sabbath.)

Kiddush at Grandma and Grandpa’s was a major affair, involving a white tablecloth, the best china, two cholla loaves, roast chicken, potatoes, vegetables and, if we were lucky, a baked cheesecake or meringues with whipped cream to finish.

But the undisputed star of the show was Grandma’s chicken soup, served with noodles and round kneidlach (balls of dough). It was a requirement of your seat at the table that you had a minimum of two helpings – preferably more. Jewish grandmas famously don’t mess about when it comes to feeding their progeny.

In 2019, though, Friday night dinners are different. The most obvious absence is Grandpa, but as people disappear, go to university, work abroad and get married and divorced, eating habits change too. Along with my sister and the majority of my cousins, I no longer eat meat.

None of our parents cook chicken soup: first, because most of their children don’t eat it, and second, because many of them have also cut down their meat intake. In simple terms, this means that unless things change, the tradition of chicken soup in this family will probably die with my grandmother.

The shift, which has made centuries’ worth of valued tradition suddenly untenable, can be put down to farming habits – to the global movement away from the small-scale domestic agriculture of my great-grandparents, towards the industrial, the intensive and the vast.

In the past 50 years, the number of chickens on the planet has increased fivefold to more than 20‑billion. Other livestock have proliferated too, bringing with them new environmental and ethical consequences. 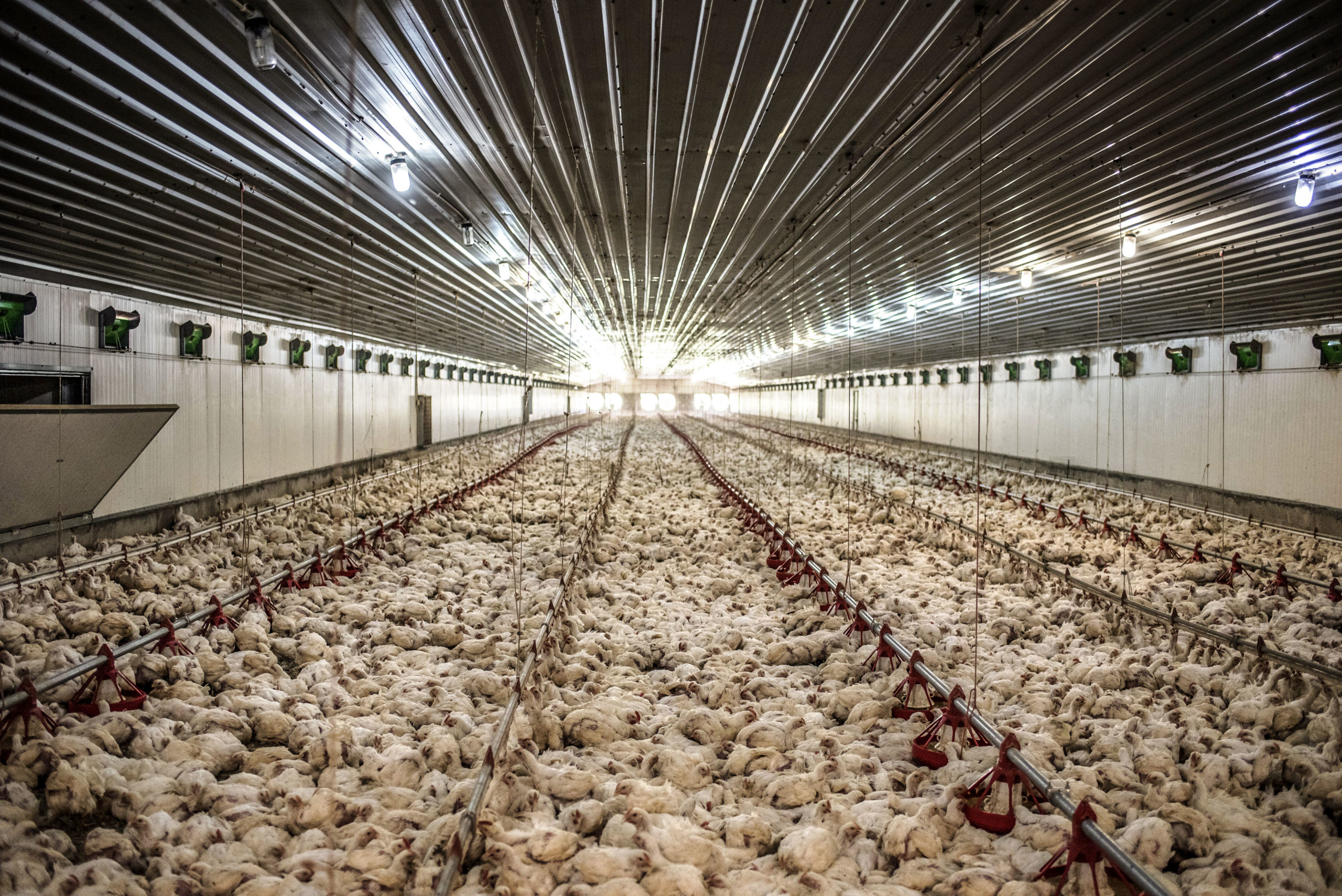 For example, instead of feeding humans directly, 40% of the world’s crops now go to feed livestock, which contributes to global hunger. Intensive farming of fish as food for livestock uses up food sources for wildlife, endangering species and contributing to falling biodiversity. The planet’s cattle now produce more greenhouse gases than all the different forms of human travel combined. During the summer of 2019, the equivalent of five football pitches per minute was lost from the Amazon rainforest to make way for farmland.

Nine out of 10 livestock chickens in the UK are now raised in windowless sheds, which each house over 20 000 birds. The average lifespan of a chicken in an intensive farm is 35 days, compared to backyard birds which can live to 10 years and more. Even nominally “free range” farms can legally house nine birds per square metre of space.

This was not the case for previous generations. There were no implications for the Amazon rainforest when my great-grandmother was throwing meal out to the birds in the garden — no concern that feeding them contributed to the extinction of penguins in South Africa, or that they had been raised without sunlight or space to breathe. But these concerns are all factors in my generation’s rejection of chicken soup.

That’s the key difference between my great-grandmother and me. It’s not that she thought meat-eating was fine and I think it’s wrong: it’s that meat-eating, for me, is a completely different act with a host of different implications.

“So what?” you might say. I’m lamenting the inevitable. Traditions often become untenable over time as the context in which they exist moves on. Plenty have been lost that way, and doubtless more will be lost as the world continues to change.

But I’m hesitant to be quite so quick to concede defeat. While meatlessness is good, cultural homogenisation is not, and in the era of Trump and Brexit, when immigrant cultures are increasingly demonised and subject to erasure, the acts that ground minority groups and give us a sense of our histories deserve to continue to be cherished.

While I don’t plan on eating meat again, I would like a future in which later generations of my family can engage, even once in their lives, in the traditions of my ancestors without shame, and do so without contributing to our planet’s demise.

So now I find myself at the crossroads where many others have got stuck: between the cultural imperative to engage with tradition, and the environmental and ethical imperatives to give up meat.

Only understanding the role industrial farming has played in the creation of this dilemma offers us a way out. The tension between ethics and identity forefronts a new basis on which to advocate changes to farming practices: one which is less scientific and objectively ethical, and more emotional, and fundamentally human. Individuals from diasporic communities – whether they eat meat or not – all have an interest in seeing an end to industrial farming, because the process threatens not only the earth and the animals we share it with, but the selfhoods we have built on it.

Industrial farming is not inevitable. It’s the result of an aggressive push towards the accumulation of capital in lieu of any ethical or environmental considerations. It can be rejected and acted against, and it should be.

Only by giving up industrially farmed meat – which means the vast majority of meat under the present system – can sustainable farming be protected. Otherwise, industrial competition will wipe it out. And only through sustainable farming can our traditions and the belonging that they offer us continue.

Crucially, belonging cannot be measured. It must be felt and breathed and eaten at our grandmothers’ dining tables on a Friday night.