Capitalism is absurd and unsustainable, or so it feels after watching South Korean director Bong Joon-ho’s award-winning film Parasite (2019).

The film joins some of Joon-ho’s other titles — Okja, Mother and The Host — in dissecting the social ills that have plagued the world so quietly that they seem normal.

Such is to be expected of a South Korean horror. As an alternative to guts and gore, South Korean horror films delve deep into the uncomfortable realities of the oppressed that Hollywood chooses to look away from. It’s not monsters, ghosts or demons that keep you up at night, it’s the social commentary.

Joon-ho is a visible member of South Korea’s left-wing New Progressive Party. He also studied sociology at Yonsei University in Seoul. So, it’s plausible to think that his habit of burying political and social commentary in films stretches beyond the influence of the Korean horror genre.

Parasite is not the first film to offer audiences a parable against capitalism. Robin Hood justifies stealing from the rich to give to the poor. Excessive material wealth gets the protagonist nowhere in The Great Gatsby. And Sorry to Bother You demonstrates how the success of black folk in corporate spaces often demands self-shrinking and performative behaviour.

Unlike the above-mentioned titles, however, Parasite doesn’t shy away from the aesthetically unattractive parts that come with telling an anti-capitalistic story. From its opening credits, Joon-ho throws the viewer into a compact, cluttered and damp semi-basement apartment, occupied by a close-knit family of four adults who, apart from their blood relation, are also bound together by poverty.

Through this family’s joint efforts at surviving, Parasite slowly unfolds to demonstrate the disparity of wealth in a capitalist society and how this often leads the poor into a corner where they will stop at nothing to get their share of the crumbs left over by the fat cats who pay their wages.

The film also branches out into related themes including debt, academia as a prerequisite to success, nepotism, intolerance, deception, as well as the relationship between bribery and censorship.

The thematic layers are laid through a series of calculated events showing how a working class family sabotages others in order to work for the first well-off family that they have access to.

At first their master plan seems solid. All they have to do is carry out everyday laborious tasks such as cooking, cleaning, driving, tutoring and baby-sitting for their masters. But soon thereafter the tasks morph into on-call servitude that disregards the impoverished family’s humanity. Yet no one says anything. It’s only when this false sense of job security and comfort is threatened that the serving family becomes responsive. Much like a parasite, they only respond to stimuli that could potentially result in the loss of their host.

Not long after the film’s opening credits, its title begins to resonate with the characters’ behaviours. A parasite is an organism that survives by living in or on another organism (its host). Over time the parasite’s survival is at the expense of the host because it feeds on its nutrients. In Parasite, the working class survive by living on a fragment of the rich’s wealth whereas the wealthy get through their day-to-day tasks by dehumanising those who labour for them.

But it isn’t just the characters’ development that speaks to the film’s title. Parasite’s plot mutates from genre to genre, remaining mysterious and predictable. And because of the absurd nature of reality, which can hop from a tragicomedy to a thriller in moments, it works.

Other ways in which Jong-ho delivers and sustains the film’s message for over two hours include the locations and the presence of recurring lines that act as catalysts or bookmarks for the film’s significant moments.

Parasite takes place in two locations. The first is the semi-basement apartment made from concrete. In the same way, capitalism discards those it has failed to a dark and mostly underground existence. The second location is inside the rich family’s spacious glass mansion, a highly visible site of capitalism. 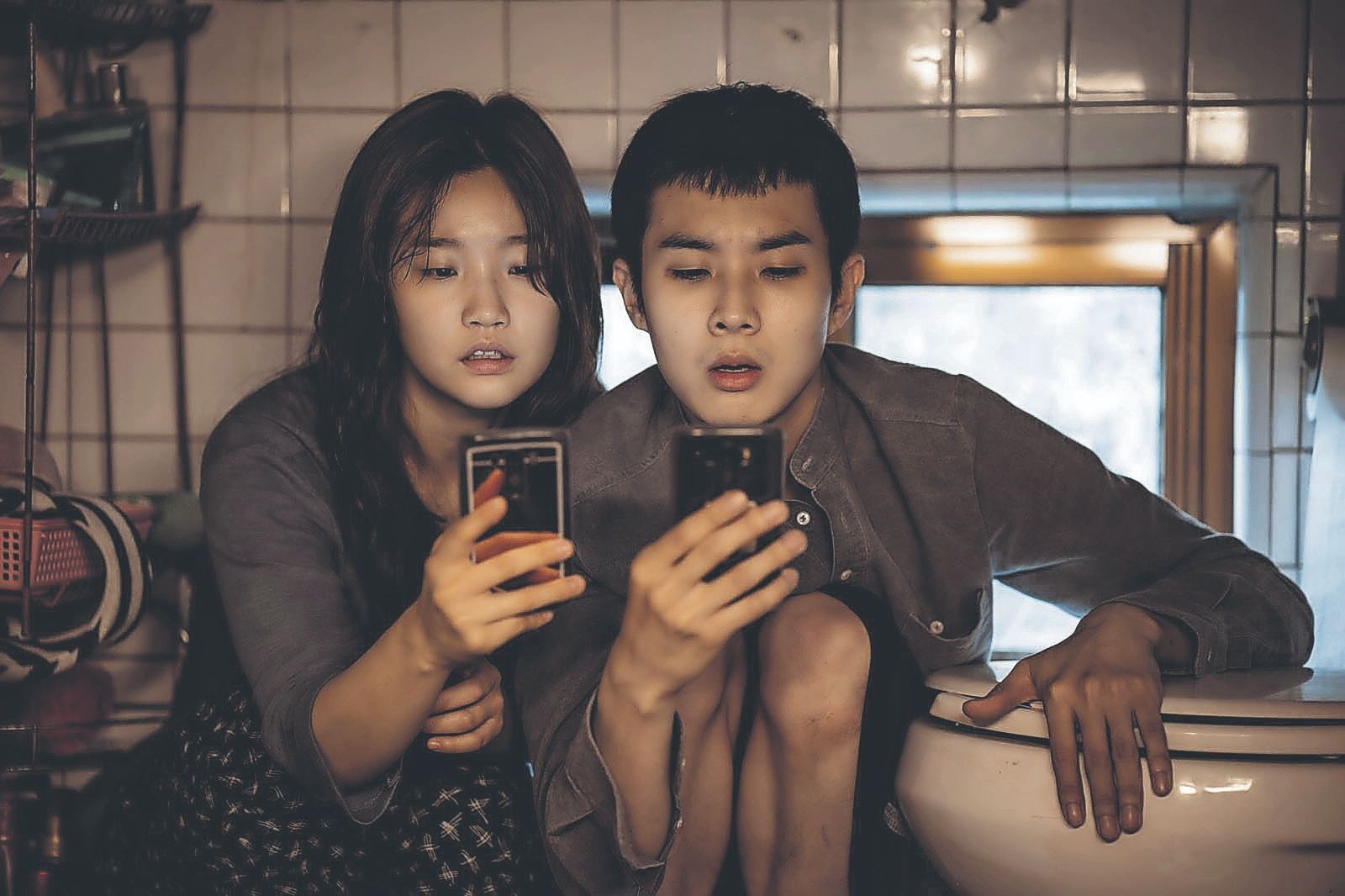 In the depths: The working class Kim family have to learn how to inveigle a rich family to employ them.

Speaking to The Atlantic about the architecture of the two homes, Joon-ho recalls how the film’s set was built to accommodate the director’s desire to capture the occurrence of multiple events on the screen in such a way that ensured that the characters did not have access to the full picture that the audience sees.

With regards to recurring lines, an example is how the endowed family repeatedly complain about the unpleasant smell of the family that serves them. The smell, which they can’t seem to rid their clothes or bodies of, seems to symbolise the stigma attached to those with living on a financial deficit.

Parasite is agitating, in the same way that a candid, unplanned, high-definition photograph is. It’s too close to the truths we choose to ignore for it to be consumed comfortably. The only difference (and what leaves viewers feeling haunted) is that unlike the instant effect of a high-resolution jpg file that is uncomfortably realist, the erasure of capitalism and its long-lasting effects require a gradual, generational process.