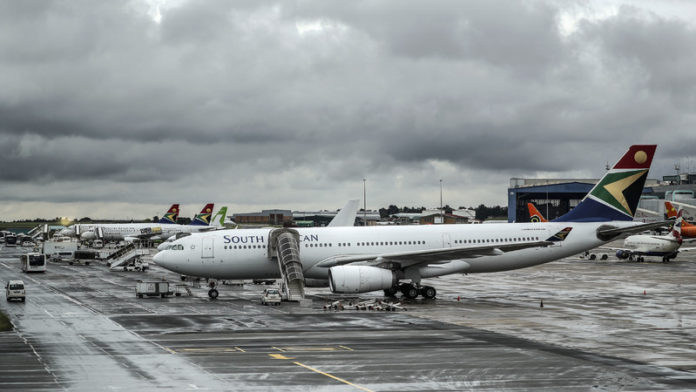 SAA is in the process of switching its customers to its sister and partner airlines after it yesterday cancelled 12 domestic and international flights due to low demand.

It was not immediately clear if customers are not booking with SAA because of its uncertain future.

In a statement released on Tuesday, SAA said the cancellation is in line with the airline’s “usual policy of reviewing flights and consolidating services with low demand”.

The cancellations are understood to have started last night at about 10pm.

SAA said it is working closely with sister airline, Mango, to accommodate passengers on alternative services to minimise disruption, and to ensure passengers reach their destination on time. The same principle will be applied to cancelled international flights.

South Africa’s biggest travel agency, Flight Centre, confirmed the suspension and said that it has been working through the night to advise, assist and re-accommodate affected passengers, where possible.

Last year, Flight Centre said that it had made the decision to no longer sell SAA tickets,  because its travel insurance provider no longer would no longer cover SAA tickets, due to “doubts concerning the long-term viability of the airline.” The travel group said it will retain this position “until such time as we have obtained certainty in the market”.

It said it now books flights on SAA only if requested to do so by customers.

SAA said that during the current business-rescue process, flight cancellations represent a “responsible strategy” to conserve cash and optimise the airline’s position ahead of any further capital investment.

The ailing airline was placed under business rescue in December after not having enough cash to deal with its daily operations. But the future of the airline remains gloomy as it is still waiting for R2-billion from the government needed to keep it flying.

On Sunday, the department of public enterprises released a statement reiterating its stance that it will work to save the airline.

It confirmed that SAA lenders had provided R2-billion as post-commencement finance to enable SAA to continue to operate, while the government, though national treasury, had committed an equal amount.

It is unclear how or when the treasury will supply the R2-billion, which Finance Minister Tito Mboweni has said will be provided in a fiscally neutral manner, meaning the government will not increase borrowings to source the money.

“The government continues to work with the business rescue practitioner, with the primary goal of bringing out of this process a restructured, modern airline that is able to bring millions more tourists and be a beacon of both business innovation and efficiency,” the public enterprises statement said.

Myeni claims a conspiracy against her and Zuma

Cathy Dreyer, the first female head ranger of the Kruger National Park, speaks to Sheree Bega about earning the trust of black rhinos by reading to them and why the park’s hard-working rangers deserve the admiration of all South Africans
National

The state capture commission report will not be ready by the end of September, and Zondo says he believes it will be in the public interest to grant an extension
Business