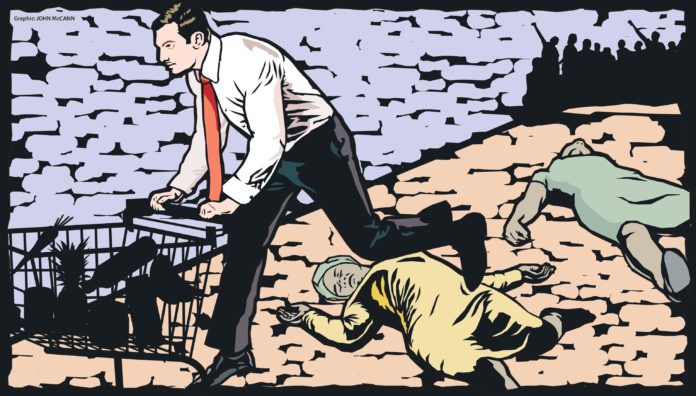 The fact that we are a deeply unequal country is often more of an intellectual truth than a lived reality for those of us on the cushy side of the divide. The national lockdown that was announced on Monday to contain Covid-19 is about to change this spectacularly. Every theoretical truth will become our immediate and visceral realities in middle-class and wealthy South Africa, in ways we may not be ready for.

We, the privileged ones, ought not to waste this crisis that will shake our class biases and suburban economic hegemony, even as we fear the countless aspects of it that are, as yet, unknown.

The virus will force us to take seriously what we should have decades ago — internalising how much our fate is interconnected with those of the most socially and economically marginal people in the country.

Take the scenes of stockpiling and panic-buying of basic necessities that played out at many retail stores over the past week. Even if we discount the madness by ascribing an understandable amount of existential angst to the stampeding crowds desperate to make sure their families do not go hungry during the national lockdown, it is hard to ignore how invisible the indigent and the working poor are in the minds of far too many middle-class and wealthy South Africans.

There are at least two equally unflattering drivers at play here: either a person buying more than they need does not think about other people; or, they think about other people, but they do not have adequate regard for their moral entitlement to also access food. Both of these positions are ethically warped in general and even more so in the particular context of a pandemic that requires group co-operation for all our sakes.

But, here’s the point. What might happen if millions of poor South Africans were to run out of food in the townships because of our suburban greed and lack of solidarity with citizens who happen to live on the wrong side of the apartheid-era tracks that remain intact?

Suddenly, Tracy Chapman’s Talkin’ About A Revolution won’t just be a nice gentle song to sing along to while on a drive to Magaliesberg for the weekend. She lyrically warns us to “run, run, run” because “poor people gonna rise up and get their share”. The biggest incentive not to break the law is when you have a purpose in life. You must feel as if you are waking up daily and having another good bash at living — in moral philosophical terms — the good life.

In the weeks ahead, many more people will become unemployed because of restaurants, hotels, health and fitness establishments, spas, bookstores, coffee shops, and countless other businesses closing. Although the government has announced some relief, it is not going to be enough to stop the economy from tanking entirely, or to prevent unemployment from soaring further.

You cannot feel good about your life if you are down and out. You also begin thinking about risks that ordinarily you would not need to consider when you are too busy being productive.

What we do not take seriously in our suburban bubbles is the self-defeating nature of ignoring the connection between inequality and our own chances of always living well. In reality, our welfare in suburbs such as Sandton has always been more precarious than we have recognised, an illusion sustained until now by constantly throwing money at private companies to keep the poor out. We do so with our access to private security, education and healthcare.

The national lockdown could be a spectacular equalising force for those of us who have enjoyed the bliss of not knowing how “the other” lives. Because the sheer depth of the social and economic effect of the lockdown will be to crush the economy further, we are about to see and experience — not in seminar rooms, but around us — the real-world effects of privileged classes not giving a damn about the marginalised and pretending that our assets and social capital are purely the outcomes of hard work and talent.

Of course there are exceptions among middle-class citizens, but, before you waste time writing a proverbial “strongly worded letter to the editor”, think of the obvious: the odd person paying their domestic worker for a month to stay home during the national lockdown does not amount to correcting the structural injustices of our society.

It does not amount to saving the informal economy from potential overzealous cops or soldiers sweeping hawkers from our pavements in enforcing the national lockdown. It doesn’t help the working-class families who get paid only this weekend and have to search for toilet paper already sold out, to those of us who had cash or credit in the third week of the month.

It won’t help a homeless person who did not score a limited spot in a shelter. It won’t help a business in the shadows of the cash economy too scared to seek help from the state to survive for fear of being punished for dodging the taxman for so long. It won’t help the family who was thrown out by a landlady because they cannot pay rent now that mom and dad are both retrenched.

The brutal truth is that we have paid inadequate attention after 1994 to gross and multiple forms of inequities occasioned by our history. This pandemic is not only a seriously scary public health crisis for all the obvious reasons — limited resources and a weak public health system plus a vicious and greedily infectious virus — but it is also scary because the social and economic unrest we potentially face is real in ways in which many societies in both the Global North and South do not have to think about as urgently (barring comparatively similar geopolitical locations such as Brazil).

We are right to have the country on lockdown. The public health case for a national lockdown is cogent and indisputable. But, until now, we have managed unrest despite the economic indicators always being shamefully unjust. We often refer to ourselves as a “protest nation”. The days ahead will be far more testing than ever before.

Perhaps the most crucial irony of history is that the very infrastructure of apartheid that we failed to dismantle — apartheid spatial planning — is what will allow the possibility of law and order being maintained, even as frustration sets in in our communities. But that depends on the men and women entrusted by the politicians to give effect to the political resolutions (the police and the army) doing an honest and disciplined job on the streets of our cities and towns. They may. They may not. We will soon know.

If — and there are no guarantees — we survive without too much damage to our society, it can never again be okay for citizens to ignore the imperative of cross-class solidarity. The hardworking taxpayer isn’t to blame for the state of the state. But if those of us who have economic power had acted more consciously since 1994 — and with greater regard for the wellbeing of the marginalised, even while skewering a poorly performing state — we could have been better prepared to take on a pandemic such as Covid-19. Now is the time to rehearse solidarity — and urgently. That is our only option.