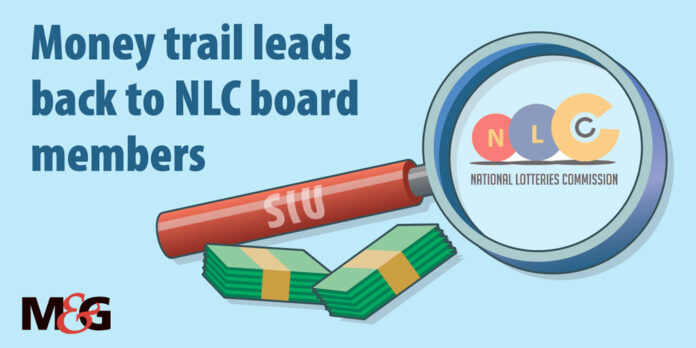 A private construction company, Upbrand Properties, which is linked to a senior executive at the National Lottery Commission (NLC), has made several seemingly dubious payments to board members of the commission.

The payments were made after a nonprofit organisation (NPO), I Am Made 4 God’s Glory (IAM4GG), secured several funding grants, totalling more than R55-million, from the commission. Some of that money seems to have made its way to Upbrand.

According to the company’s financial records, it made payments of more than R2-million to the commission’s non-executive board member, advocate William Elias Huma, and its chief operating officer, Phillemon Letwaba, between 2016 and 2018.

The Mail & Guardian has seen the records.

Upbrand was registered in 2016. Its founding director, Johannes Letwaba, is the brother of Phillemon Letwaba. Since its inception, the company has secured contractual work from NPOs, including IAM4GG, that have received funding from the commission.

Currently, the commission is being investigated by the Special Investigating Unit (SIU) for allegations, including maladministration, dating back to 2014. The financial records show a trend of payments to commission members or people connected to Upbrand.

Previous reports by GroundUp have connected IAM4GG to Upbrand. Over the years, the NPO received several grants from the lottery commission and hired Upbrand to conduct work that it did not finish. However, as the financial records show, Upbrand pumped millions of rand back into the commission member’s pockets.

One of the central figures in the connection between the NPO and Upbrand is a man called Lesley Ramulifho. He is an attorney and the chairperson of IAM4GG.

According to a GroundUp report, on 26 April 2018 IAM4GG received an R11-million grant to develop an integrated sports facility in Limpopo. It then sent R2-million of that money to Upbrand.

GroundUp also reported that, in 2016, Ramulifho allegedly fraudulently took over an NPO called Denzhe Primary Care. Then the NPO received R7.5-million from the lotteries commission.

In the same year, in October, Upbrand signed a R15-million building contract to build a rehabilitation centre in Denzhe in Limpopo.

Denzhe ended up receiving a total of R27.5-million from the commission to build a new drug rehabilitation and sports centre; however, the facility is still incomplete.

“It is shoddily built, roofs leak, there are cracks in walls, and doors and windows do not fit properly,” reported GroundUp.

Based on the Denzhe matter, the commission released a statement on 6 December 2018, saying that on “discovering the potential conflict of interest the COO [chief operating officer] engaged his brother [Johannes Letwaba] to resign his directorship and relinquish his shareholding of the company. The COO [Phillemon Letwaba] further declared the matter with the NLC commissioner.”

A former Upbrand employee, who asked to remain anonymous, told the M&G that Johannes Letwaba had been involved in running the company while they were employed at Upbrand. The employee also said that although the company was in the construction industry, “it did not look like they knew what they were doing half of the time”.

Since 2018, the media has reported on how the commission’s funds have been misused and have gone into the pockets of NPOs and not towards benefiting communities. These reports led President Cyril Ramaphosa to authorise the SIU to investigate allegations including corruption, unlawful conduct by employees, maladministration, and intentional or negligent loss of public money. In December last year, the commission’s offices in Pretoria were raided by the SIU.

Huma did not answer questions from the M&G about whether he received the money from Upbrand.

He instead noted that the SIU is probing the lotteries commission and said he cannot comment.  “I am co-operating with the SIU investigation in this regard, and I am unable to make any public comment on this matter, as it might be seen as prejudicial to the SIU investigation. I would like to give the SIU space to conduct and finalise its investigation without me prejudicing it with my comments or response,” Huma said.

According to the lotteries commission website, Huma, who according to the records received more than R2-million from Upbrand, was appointed as a non-executive member of the board on 1 April 2017. Before occupying this position, he was the chairperson of the board and the distributing agency committee at the NLC.

The M&G contacted Phillemon Letwaba, who denied any wrongdoing. He said that the process to release funding at the commission is “strict” and no one will ever influence the distribution of funds.

“I don’t even know who applies,’’ said Phillemon Letwaba, adding that “none of my family members has ever received grants, even my wife”, neither in their personal capacity nor through any NPOs.

He said he never used his power to influence grants to go to specific NPOs. “I know a lot of people who are in the grants space because of my work. The fact that I know you does not mean I am conflicted,” he said.

He added that he does not get involved in the funding processes or know for which grant beneficiaries are applying. “Everybody is targeting me; I do not understand.”

He added that “to this date, no distributing member has ever said, ‘Phillemon has instructed them to give so and so funds.’ I do not even run the process of grants.”

When asked about the funds transferred to him from the Upbrand account, Phillemon Letwaba said it was a private matter, and “therefore, he will not comment”.

Phillemon Letwaba was still on special leave, which was instituted in March last year after board members appointed audit firm Sekela Xabiso to conduct an independent investigation into allegations of improper use of funds.

Phillemon Letwaba told the M&G that he took leave because he wanted the investigations to be dealt with without any “perceived” influence from him. “I am a chartered accountant by profession; anything that seeks to taint my name, I am very careful about it,” he said.

SIU spokesperson Kaizer Kganyago told the M&G that the unit could not comment on an ongoing investigation. He said investigators were still analysing the documents and needed to conduct interviews.

The M&G contacted Sthembiso Skosana, who is now the only remaining director of Upbrand, about the movement of money from the company to officials of the commission.

He said that he was appointed only in 2020 and, therefore, would not be able to deal with matters that arose between 2016 and 2019.

Skosana said that the company did not receive any money from the commission, because the NLC does not fund private businesses, but NPOs.

“The transactions that happened within the company have no relationship with the NLC and are purely private. I am no[t] aware of any investigation into Upbrand by the SIU. I am, however, aware of [the] SIU investigation into the NLC grants, which Upbrand has never received from the NLC.”

When asked about the payments, NLC spokesperson Ndivhuho Mafela said that the commission was co-operating with the ongoing investigations and was unable to comment.

On the flow of money from Upbrand to the commission’s top officials, Mafela reiterated Skosana’s comments: “The NLC only funds nonprofit organisations.”