Life & Times of Michael K: The very heart of what puppets are

Ah! Dalibunga! The image of Nelson Mandela, rising from the dead, grabs my imagination in the opening scene of JM Coetzee’s Life & Times of Michael K.

Adapted for the stage by Lara Foot, in collaboration with the Handspring Puppet Company, Baxter Theatre, the production is spellbinding in the Baxter’s newly refurbished and ornate red-seater Main Theatre.

I see Madiba in the wrapped gift that two puppeteers bring to the stage. When what I imagine to be a mysterious umngqusho is unwrapped, I am enthralled when Michael K springs to life like a healthy chick out of an eggshell. His enigmatic arrival at life’s door soon prepares the audience for an enchanting journey of epic and intriguing thrills and discoveries, edenic garden dreams where Michael K sings and performs his life’s freedom songs.

Virtuoso South African jazz pianist Kyle Shepherd also enlivens the play with his evocative musical interludes, smoothly blended with short segments from selected compositions by the iconic Abdullah Ibrahim. When Foot later tells me that she likes to take long drives and discover the beauty of the country and the continent, much makes sense regarding her directorial choices.

Don’t blame me for dreaming about the second coming of Madiba in Foot’s masterful adaptation of the Nobel literature laureate’s 1983 novel. We are in rough and uncertain times of brutal poverty, unemployment and hunger. There are increasing incidents of rape, xenophobic and other hate crimes in South Africa.   Russia is waging a bloody war in Ukraine. Africans trying to flee the war face brutal racism on the besieged borders. It’s such a world where figures like Madiba are direly needed. Not because they are gods, but because so many people in the world desperately need hope.

“I’ve never felt such existential dread or darkness inside. It’s always been about basic survival with no time to look up and think or it’s seemed like there could be some way out, in the remote future.” 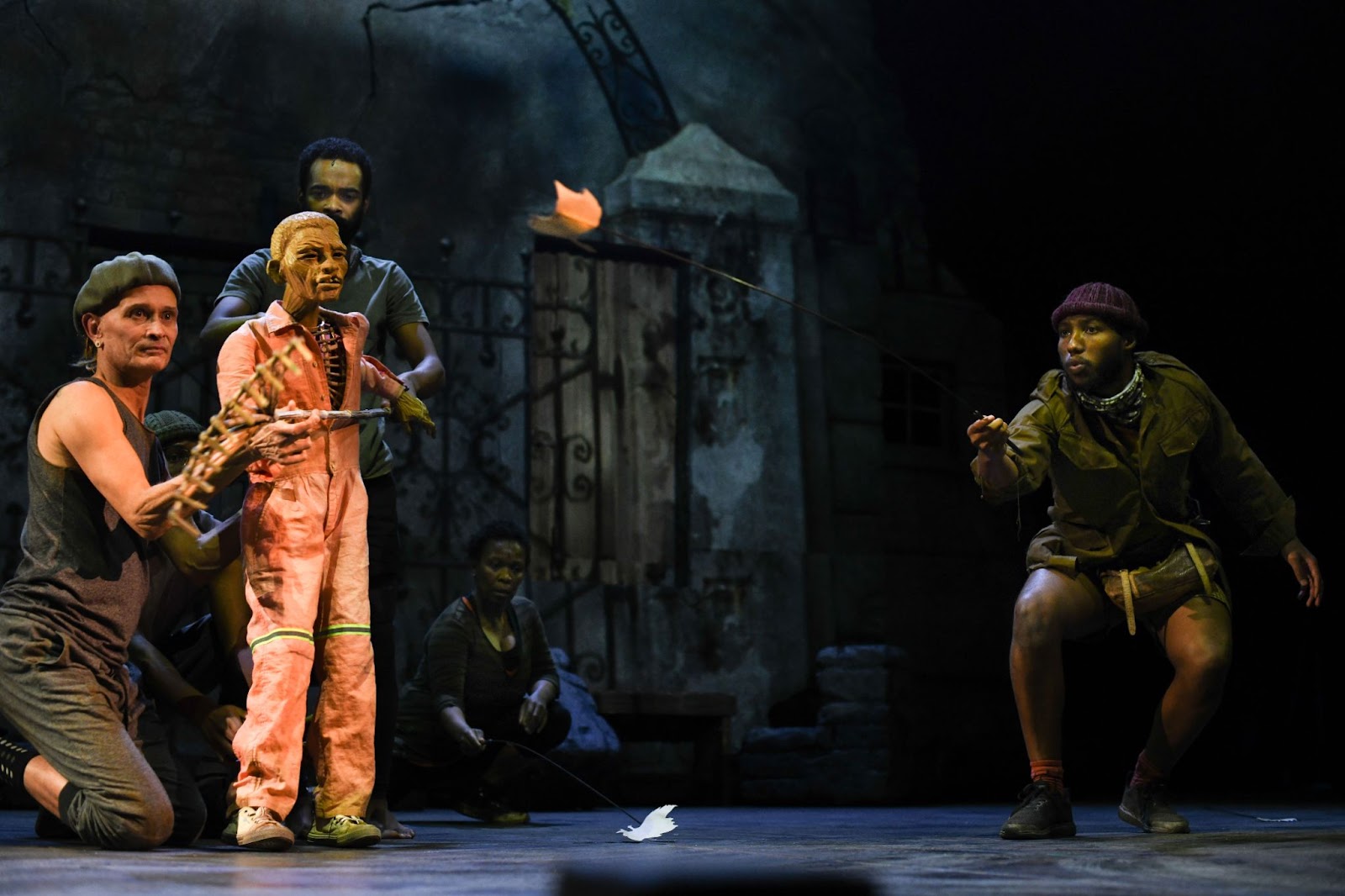 Traumatic words by a dear friend, Ukranian-born Yuliya Komska, now associate professor of German Studies at Dartmouth College, New Hampshire in the US. “Even at the onset of Covid. Now there is just the dread and the darkness,” writes Komska. She could have been writing about Palestinians, languishing in hellfire – betrayed by a double-standard world.

To watch South Africa’s premiere of Life & Times of Michael K, a Düsseldorfer Schauspielhaus (Germany) and Baxter Theatre coproduction is a special occasion. Previously, due to the outbreak of the Covid-19 pandemic, the world premiere  at the Theater der Welt festival at the Düsseldorf Theatre, Germany, in June 2019 was postponed to June 2021, through a live stream from The Baxter to Dusseldorf.

But when the company finally made it to Germany last November, it left audiences entranced. Hence their upcoming return to Germany to perform live for the first time.

In world literature today, South African-born author JM Coetzee casts a long shadow. It is therefore apt that Coetzee’s work reads like indispensable textual stars who inevitably attract visionary thespians like Lara Foot to join them on their cosmic escapades of enquiry and commentary on our turbulent times. The novel’s setting in a fictional South Africa of our recent past, which was characterised by war, detention without trial, forced labour and the suppression of basic individual liberties, rings true for many people in the world today.

Coetzee’s Michael K is no prince in shining armour. Neither is he a populist leader who feeds his hordes of besotted followers lies and manure. Instead, in Brother K, one sees the work of a lonesome traveller across time and hinterlands of human anguish. His mother delivers him with great difficulty, and the midwife quickly notices that the child has a harelip. While the defect brings Michael K social ostracism, it also sharpens his tongue for his radical vocabularies of articulating a stubborn vision of his unfettered individual liberties. When he is detained in a war camp for not carrying the “correct” papers to move around, as was the case with Group Areas Act in apartheid South Africa, his immediate instinct is to escape.

The Karoo, its dry majestic escarpment, grassy dwarfy shrubbery and million silences, all come alive in the play. This is because the superb acting is neatly woven into a powerful blend of puppetry, animation and filmic projection Lara Foot shot in the Karoo. The mesmerising multimedia experience brings a magic realist adventure treat navigated by a surprising superhero, the rebellious, lanky, “unattractive”, yet extremely fascinating Michael K as our unforgettable tour guide.

He is also our roving reporter on the ravages of war and repression, especially its corruptive force on a society’s moral fibre. In a world where everyone wants to use his power over others, as a blunt instrument of repression, Michael K is not just loyal to roots, but to the universal idea that we are all born free. That is why, when his rustic, abandoned farmhouse is compromised, it is time for him to hit the road, and thanks to puppetry, walk in the skies, atop rivers, hills, and mountains. He is an earthly man who flies.

Lara Foot is happy to be “finally able to share Coetzee’s profound novel” after the previous cancellations, thanks to Covic-19 and its strains on the freedom of movement and association. Foot explains more in her production notes: “It is impossible to write about this production of Life & Times of Michael K without referring to the challenging times we are living in. Indeed, the single purpose of Michael K to deliver his mother to the earth and to become a gardener – has resonated in this company’s need to deliver his story.”

This is the story of freedom – its varied meanings, and its lived experience by someone Foot calls “an inimitable everyman”. She finds the ordinary yet subversively heroic Michael K someone with a “unique ability to find his own version of complete freedom; he will not prescribe to servitude, nor politics, and chooses to stay out of any of the camps”.

In the play, it also becomes clear that Michael K is a wanderer with a big heart. Angry about the lunacy of restricting people’s free movement, like the Noah of Biblical imagination, he builds a cart out of a wheelbarrow and other scrap materials, so he can take his dying mother back to the countryside. His big heart is also apparent in his stoical passion for gardening. His pumpkins must feed the famished, no matter who they are.

To watch a play by Foot is a great joy. In 2009, her work on the horrors of child gang rape in South Africa, Tshepang, at the Market Theatre in Johannesburg, blew me away. In her brilliant cast, the heavy-laden face, voice and body of Mncedisi Shabangu is the most memorable.

Life &Times of Michael K also wins the day in part thanks to a superb mix of acting talent comprising veterans such as Sandra Prinsloo and Andrew Buckland, and equally refined but less familiar names such as Faniswa Yisa, Carlo Daniels, Billy Langa and Nolufefe Ntshunshe. Craig Leo captains the puppetry ship with distinction, and with Daniels and Roshina Ratnam, give the show its dreamy magic.

After the play, Foot tells me that she believes the stage adaptation of Coetzee’s novel would have not had as much power without puppetry. Puppets enhance and excite the eye and the ear in a charming way that revives childhood bliss in many people. She says working with the Handspring Puppet Company in the production was “the highlight of my career thus far”.

The collaboration is special for The Handspring Puppet Company as it celebrates its 40th birthday. Basil Jones, who with Adrian Kohler directed the puppetry, explains the creative vision in the production notes.

“Creating Michael K and presenting his life has led us into the very heart of what puppets are, what they can and can’t do. We have taken risks and challenged some of the ‘principles of puppetry’ that we’ve developed over the course of our career. What is the relationship between the self and its prosthesis? To what extent does the puppet’s life reside in its manipulators? Can the manipulator speak for the puppet but not be physically connected to it? How can a puppet – an object so obviously controlled by others – become a symbol of independence?”