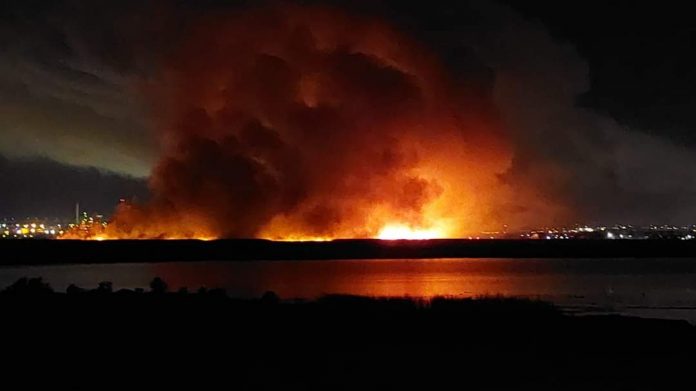 A fire that burned for two days in Table View, Cape Town, is almost out but the city’s fire and rescue teams are still fighting an extensive blaze on the slopes of the Helderberg Mountain near the Lourensford Estate in Somerset West.

At noon on Thursday, Jermaine Carelse, spokesperson for the Cape Town City Fire and Rescue Service, said the Table View fire was 90% extinguished and that no fatalities or damage to property have been recorded.

Carelse said earlier on Thursday that “smoke was visible as far as the CBD [central business district] and an aggressive attack was initiated to contain the fire”.

Motorists were asked not to use the R27 at Dolphin Beach because of heavy smoke.

Transnet dismissed reports of a temporary closure at the Port of Cape Town caused by the heavy smoke, but workers said there was an interruption from 3.30am to 8.50am. “Smoke from a fire in nearby Table View caused limited visibility, however, it has since cleared,” said Transnet spokesperson Ayanda Shezi.

Late on Wednesday afternoon, fire teams were sent to a fire in Somerset West after receiving an emergency call reporting that the Helderberg Mountain was alight.

“The crews worked tirelessly throughout the night and no property is in danger at this stage,” Carelse said on Thursday morning. He confirmed that aerial support might be called to help the 60 firefighters extinguish the blaze.

Jo-Ann Otto, of the Cape Winelands district municipality’s fire service, said that additional ground teams consisting of 40 members were sent to the fire because it had spread  “to high inaccessible areas from where it moved into the Grootnek area, crossing into the Cape Winelands”.

Otto says the fire at the pine plantation on the Lourensford Estate was fuelled by mixed vegetation, unseasonably high temperatures and dry weather.