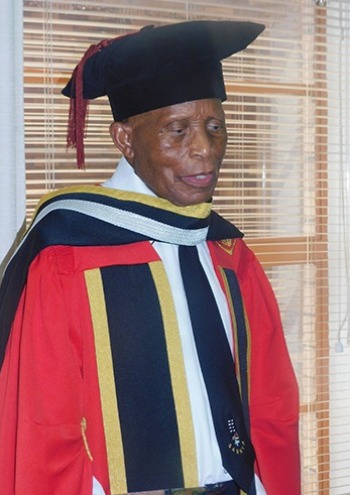 The veteran freedom stalwart and labour activist, Tlou Theophilus Cholo, speaks against corruption in South Africa and the looting of the public purse, especially when government officials are involved, which has apparently worsened with the misuse of coronavirus relief funds.

The World Bank defines corruption as “the use of public office for private gain” and Corruption Watch defines it as “the abuse of public resources or public power for personal gain”.

Cholo was incarcerated for 16 years on the Robben Island for his role in the emancipation of South Africans. Speaking from his Soshanguve home, Cholo emphasised that the government must take immediate punitive action against perpetrators, to set an example that crime cannot be tolerated.

He said that funds recovered from looters, which runs into billions, could be used to advance socioeconomic development initiatives such as education and improving living conditions in townships and rural settlements.

Cholo lays the blame on the tender system for creating loopholes and enabling corruption.  There is truth in his lament that corruption hampers the development and growth of the nation while the jury is still out on his view that the tender system should be used in special cases, especially where rare and meticulous skills are required.

Corruption is not unique to South Africa. Renowned world leaders such as the seventh secretary general of the United Nations, Kofi Annan, have fingered non-transparent business practices as one of the major propellers of corruption in Africa.  Addressing the fifth session of the Conference of States Parties of the UN Convention Against Corruption in Panama City in 2013, Annan cautioned that when there is secrecy about contracts between government and business, they evade scrutiny and subsequently, trust.

Mo Ibrahim, the Sudanese-born billionaire and founder and chairperson of the Mo Ibrahim Foundation, reportedly pointed at the ruling party for South Africa’s corruption. He was quoted in media reports earlier this year saying, “The difficulty is when you have a dominant party like that, that holds power for so many years, too much power produces corruption.”

According to Cholo, as South Africa embarks on reviving its economy, it must accelerate its efforts in developing young people’s skilss so that they can carry out tasks in sectors such as infrastructure development, manufacturing, mining, and agriculture.

The Quarterly Labour Force Survey (QLFS) for Quarter 1 recently released by Statistics South Africa (StatsSA), painted a gloomy picture with an official unemployment rate of 32,6% and a rate of 46.3% among people aged 15 to 34. The alarming high rate of unemployment and corruption possibly raises the question of when the youth are going to revolt about their less favourable socioeconomic conditions.

Coming from a colonial and apartheid past, even after 27 years of democracy, South Africa seems to be on the back foot in dealing with inequality, poverty and unemployment. It would not be far-fetched to say corruption has become the fourth problem.

The effects of corruption are wide-ranging and the UN Office on Drugs and Crime lists some of them — economic loss and inefficiency, poverty and inequality, public and private sector dysfunctionality, failures in infrastructure and diminished state capacity — as undermining the achievement of the sustainable development goals.

Economic loss and inefficiency is one of the negative effects of corruption and it is evident that the phenomenon also contributes to the country’s rising debt levels. When Finance Minister Tito Mboweni was trying to correct the notion that the government is “swimming in cash” he said in his 2021 budget speech that: “The rising debt leads to higher future taxation and uncertainty. Servicing this rising debt takes away resources that could have been invested in infrastructure and frays our social solidarity.”

Mboweni added: “Gross loan debt will increase from R3.95-trillion in the current fiscal year to R5.2-trillion in 2023-24. We owe a lot of people a lot of money. These include foreign investors, pension funds, local and foreign banks, unit trusts, financial corporations.”

In the words of Nobel laureate and former Liberian president, Ellen Johnson Sirleaf, “Future generations will judge us not by what we say, but what we do.”

Cholo said “the law is soft on criminals” and that an intervention is critical to strengthen the judiciary. The Ga-Matlala a thaba native adds that the judicial system must be able to ensure that corrupt leaders are punished so that law and order is restored.

He said South Africa is alive with possibilities and urged compatriots to support the presidency’s vision of national programmes that are geared towards the development of women and young people.Evidently, if Cholo’s views and the testimonies at the Judicial Commission of Inquiry on Allegations of State Capture, Corruption and Fraud in the Public Sector including Organs of State, otherwise known as the Zondo commission, are anything to go by, corruption is no longer a perception, it’s a reality.