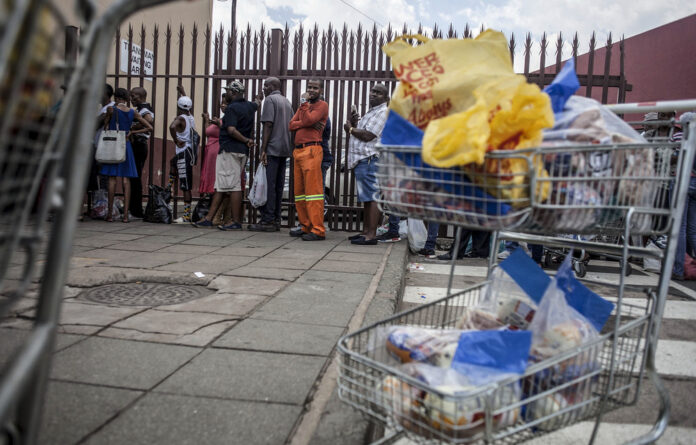 Post-apartheid South Africa is unravelling. Inequality has corroded democracy, fortified social division and fostered a climate ripe for conflict. An incapacitated state aids our trickle-up economy and the poverty produced by this means desperation for millions. This dysfunction is deepened and preserved by what seems like an insurmountable crisis: mass unemployment.

A rare consensus has emerged: that unemployment is a central obstacle to the wellbeing of citizens and the stability of society. Each political party positions unemployment as an antagonist their policies will overcome. Successive ANC executives lamented the devastation wrecked by unemployment and each president since Thabo Mbeki has detailed policy measures alongside promising immense resources to curtail the crisis, with minimal or no success.

It seems that an abundance of hope is invested in job creation as a pathway to individual financial security and as the cherished key to our economic rebirth. Each year we measure our progress, failures and potential through the prism of unemployment.

Social movements have been propelled by the yearning for employment. #FeesMustFall sought to decommodify education, hoping that ambitious and skilled young black people would be better equipped to compete in the market, their incipient careers unburdened by student debt.

Our moral leaders expect job creation to unleash benefits beyond the material realm. It is expected that jobs will provoke a moral renewal, busying our idle hands and leaving no time for antisocial behaviour. Habitual hedonism will find no host in the lives of youth. For some the chase after jobs is a moral crusade that aims to build virtue and grant dignity through decent work.

We are all fearful of the future and the present can feel unbearable, especially for those perpetually unemployed and poor. But fear and the craving for stability can distort our capacity for rational judgment. Work, though vital for material and spiritual wellbeing, is never a neutral, amoral or apolitical form of human activity.

Where one works, the conditions at work, the jobs available, the moral and financial hierarchy in which labour exists and where the wealth produced is invested (or hoarded), result from self-serving political choices. If we do not critique this, we can be seduced by the myth that jobs themselves will unleash prosperity in the nation and in our lives.

The large majority of the US’ working population is employed (157-million people), and the unemployment rate as of February 2022 sits at 3.8%, with 6.3-million citizens jobless.

Despite high employment figures, a not-so-stunning revelation is that a significant portion of Americans is dissatisfied with their jobs. Across the US, blue- and white-collar workers are quitting their jobs in a phenomenon known as the Great Resignation.

There are those who quit in search of better wages and benefits, tired of being treated like livestock undeserving of financial security, only valued insofar as they can be exploited. Others quit for mental health reasons, sickened by stifling work environments and casual abuse from bosses, who demand tireless dedication and self-sacrifice but rarely reward it.

This discontent is also articulated through union-led strikes across the US. In the sobering aftermath of the pandemic, American workers — in healthcare, hospitality, manufacturing, mining and theatre — have begun reawakening a militant spirit some thought forever relegated to history.

This Great Resignation is not exclusive to the US. A ballooning portion of South African professionals is refusing to be overworked and undercompensated, choosing to realign their priorities and quit their jobs.

I imagine some readers deem strikes and resignations to be signs of ingratitude. Our political discourse has rarely paid attention to the reality of being employed outside of the professional class. Instead, commentators frame almost any effort by labour to organise as disruptive.

Worse, when workers demand better wages, white-collar counterparts, political analysts and politicians will dismiss their demands as impractical and unfair on employers, who are often venerated in the public imagination for simply creating jobs.

This veneration and the objectification of blue-collar workers as instruments to service the wealthy, achieve economic growth and attract investment will sustain destitution and compound inequality. It often eludes our attention that the fundamental interests of major employers are in direct conflict with interests of working people and antithetical to the positive development of society at large.

The primary objective of business is to overcome competition and reduce production costs to remain profitable. Workers are an integral part of the profit-making process, coerced into jobs because the means of producing wealth exist in private hands and life’s basic necessities are commodified.

Such coercion is a restriction of one’s agency because freedom should entail the ability to say “no” to certain forms of activity without being worried about one’s survival. Employers and employees do not meet as equals, rather it is a relationship in which people’s dependency on the market and wages is exploited.

In exchange for work, one is able to get a wage and in some cases healthcare, paid time off and life insurance. Primarily workers, white collar or blue, want to secure their wellbeing and use their wages towards their own education, their children’s health, enjoying leisure time or saving towards a comfortable retirement.

Employers are not able to amass wealth without the intense and intricate web of labour that generates products and provides services. Nonetheless, employers will restrict benefits, reduce wages and as seen in recent years, retrench employees to cut costs and maintain profits.

This is not an unfortunate reality of doing business, it is owners of capital realising their interests irrespective of the human cost. It is also an assault on the wellbeing of employees, as it thwarts their ability to fortify their basic wellbeing and advance their higher ambitions in life.

Billionaire Warren Buffet once remarked, “There’s class warfare, all right, but it’s my class, the rich class, that’s making war, and we’re winning.” His transparency was shocking but the class war he describes occurs here constantly if one pays attention.

South Africa’s agriculture industry is praised as a “star performer” in the economy. In the 2020 financial year its total export earnings were $10.2-billion. And yet, nine out of ten farm workers do not earn enough to uplift themselves out of poverty.

Across our most profitable and labour-intensive industries, such as mining, manufacturing and transport, wage earners live in poverty. In domestic service, 95% earn less than R4 125 per month. While retailers congratulate themselves for exponentially increasing earnings, a large percentage of supermarket employees earn around the minimum wage.

When workers resist, they are threatened with unemployment, discouraged from unionising and confronted by violent repression if they do mobilise against their employers.

In Marikana, miners were gunned down because they tried to resist an asymmetrical war waged by the shareholders of Lonmin. The ongoing dispute between Clover and its workers over retrenchments and wage cuts is beginning to resemble the tensions that ended in tragedy in Marikana.

So long as employers possess incredible leverage — offering employment in a context of job scarcity, having access to legal resources, sympathetic ears within the media, and influence over government policy construction — such conflict will continue. If employment remains the primary means through which people have access to basic needs or services, and if we continue to organise the economy around the profit incentive, the chaos we witnessed during the July riots will become a staple feature of public life.

Jobs are essential to our economic recovery and social stability. This is not a utopian argument about a post-work society. But job creation in and of itself cannot be the horizon of our ambitions. Work should not violate your dignity, drain your agency or threaten your material security.

To subdue poverty and inequality, workers must be empowered to unionise and collectively bargain. Unions may be imperfect organisations, but if workers cannot gather to protect their common interests, they are more vulnerable to exploitation.

More than this, workers must have a significant share in the wealth they produce, not only relishing the fruits of their work but participating in the direction of production. Perhaps most critically in the immediate future, the government must recognise that the private sector will not bring salvation.

Beyond direct foreign investment and job creation, the state should use its capacities to develop citizens. This means elevating food security, public health, safety, housing and education as the predominant concerns of governance. Without such interventions, South Africa will remain an unsustainable society.