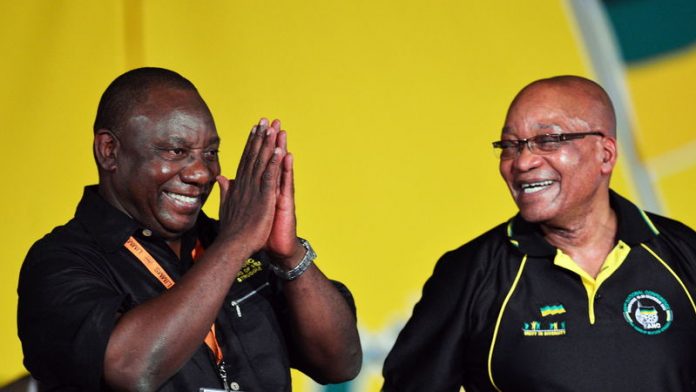 The ANC has told members implicated in the state capture report to present themselves to the party’s integrity commission.

This comes after the governing party held its national executive committee (NEC) meeting this week, and it means that former president Jacob Zuma, President Cyril Ramaphosa and Ramaphosa’s allies, Gwede Mantashe and Zizi Kodwa, must appear before the elders.

Ramaphosa made an appointment with the commission after a case was opened against him by former spy boss Arthur Fraser regarding the theft of money from his Phala Phala game farm.

Other NEC members who will appear before the commission include Nomvula Mokonyane, Lynne Brown, Mosebenzi Zwane and David Mahlobo, who have been implicated in the Zondo report on state capture.

Chief Justice Raymond Zondo, the chairperson of the state capture commission of inquiry, made damning findings against the ANC and its highest ranking leaders in his reports, saying the party not only folded its arms and allowed state capture to flourish but, in some instances, proceeds of corruption flowed into its coffers.

Zondo called for further investigation with a view to possible criminal action being taken against Mantashe, Mokonyane, Kodwa, Mahlobo and many others in the ANC, and said “it would require a certain level of ethical commitment” for Ramaphosa to stand against state capture.

Zondo found that Zuma, when president, was essentially a puppet of the Gupta family, and was willing to do their bidding.

The former president has denied the allegations, and has stated publicly that he will be taking on review those parts of the report in which he is implicated in wrongdoing.

ANC national spokesperson Pule Mabe said although some of the observations and findings were unsettling, the report would strengthen the renewal of the party through identifying shortcomings and the steps required to address them.

He said the NEC had adopted an immediate action plan to look at constitutional, legislative and structural changes that must be completed by August. The committee agreed to review its policies with respect to its cadre deployment policy and practice; party funding principles; organisational discipline and accountability; and parliamentary oversight.

The state capture task team led by Jeff Radebe will make recommendations on key principles in each of these areas, Mabe said.

“All such, ANC current and former leaders and ANC members, without prejudice, must immediately take the initiative and present themselves to the integrity commission,” he said.

The Democratic Alliance is preparing a legal battle for the ANC’s cadre deployment policy to be declared unconstitutional and unlawful, after Zondo’s assessment of the policy largely aligned with that of the main opposition party.

The ANC’s has proposed an overhaul of the policy to introduce more objective, meritorious and fact-based criteria, so that positions taken are publicly defensible, including in court, if challenged.

The ANC’s policy discussion document published in May said the pool from which it elects the requisite collective skill sets for deployment as public representatives in government at all levels could no longer be limited to members in good standing in the party.

“It needs to be substantially broadened, so we can use the best available human resources to serve our people. To this end, a new process must be devised to elect such

public representatives, at all levels of government,” the document stated.