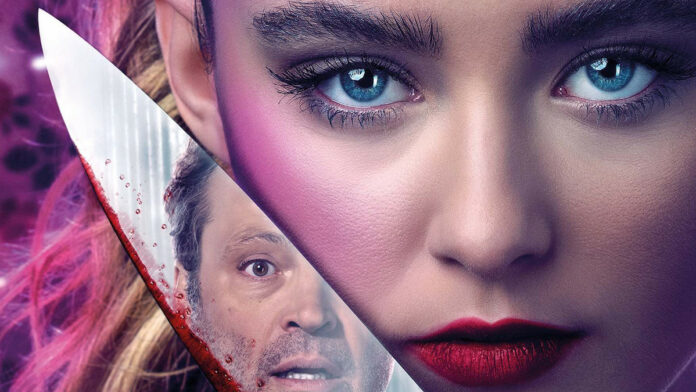 Freaky, the slasher/comedy film currently showing on Showmax, will have you hiding under the covers and laughing at the same time. The plot revolves around a teenage girl, Milly (played by Kathryn Newton), and a serial killer, The Butcher, (Vince Vaughan), who, with the help of some voodoo, swap bodies.

The teenager must find a way to get back into her old body while dodging the police, who are on the lookout for The Butcher. Meanwhile, The Butcher now inhabits the body of a meek teenage girl, and he goes on a killing rampage at her high school.

We witness a series of grisly murders, and it feels a little jilting to find ourselves giggling at the affable Vince Vaughan, having witnessed so much violence.

But it works, somehow, this marriage of murder and laughter. Vaughan is a really convincing serial killer, and paradoxically, a charming teenage girl, too. Newton plays the cutesy teenage Milly with ease, and transforms into the evil serial killer just as smoothly. In fact, she’s pretty scary.

Unfortunately, Freaky lacks imagination at times — if you’ve watched any teenage romcom or slasher flick from the 1990s (think Scream and American Pie), Freaky will feel familiar. And yet, that’s a part of its charm: we know there’s nothing ground-breaking about a gay teenage boy and his black friend on the run from a serial killer, but we still find ourselves engrossed in the storyline.

Partly this is because the cast is fresh and the script is relevant. You’ll remember Newton from Big Little Lies, and it’s clear that the 24-year-old has a bright career ahead of her. Lesser-known faces such as Celeste O’Connor and Misha Osherovich, who play Milly’s besties, give the movie energy. The teenagers are every bit as Gen Z as you’d expect, with their woke-isms and social media, which helps Freaky stay relevant.

It’s bound to be a hit with today’s teenagers, with enough of a storyline to keep adults hooked till the end, too. — Sarah Evans

Tug of war over the extradition of WikiLeaks founder to the US enters final stages, with London’s high court set to make a final decision in September