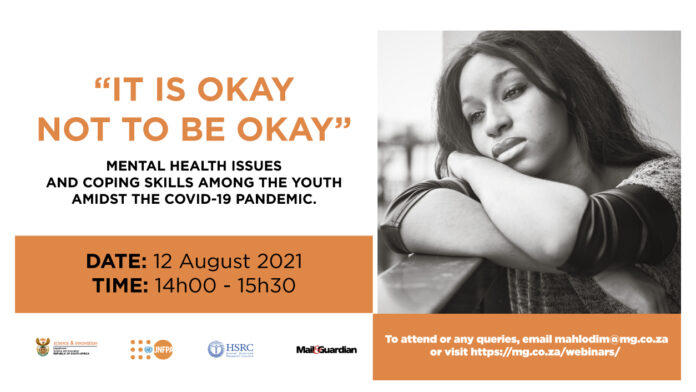 On International Youth Day the United Nations Population Fund (UNFPA) and the Human Sciences Research Council (HSRC), in partnership with the Department of Science and Innovation (DSI) reflected on issues that address broad mental health challenges that were faced by young people across South Africa with the advent of the Covid-19 pandemic.

The webinar was hosted by the Mail & Guardian and was moderated by Precious Magogodi of UNFPA. It featured the following speakers: Dr Agatha Lawson, Officer-in-Charge for UNFPA and Country Director for UNFPA Botswana & Eswatini; Professor Heidi van Rooyen, Executive Director of the Human and Social Development Programme at the HSRC; Professor Sibusiso Sifunda, Chief Research Specialist in the HIV/AIDS, STIs and TB (HAST) research programme of the HSRC; Daphney Mokagane, a Graduate from Boston Media House; and Angelique Thomas from the research group.

The Covid-19 pandemic has hit young people particularly hard, and first-year university students have found it particularly difficult to cope. This demographic is suffering from severe psychological distress; isolation, stress, and an inability to cope with their workloads are weighing heavily on South Africa’s youth.

These were some of the findings contained in a new study undertaken by the Human Science Research Council (HSRC). In contrast to the 18-19 year-olds, people in their early thirties coped much better with the pandemic. They also coped better with their workloads, indicating that they had better coping skills and support networks, the data showed.

Professor Sibusiso Sifunda said the survey was one of several undertaken by the HSRC since the onset of the pandemic. This includes the Health Care Worker Survey and the Impact of Covid-19 on the Youth surveys.

For this study, titled, “Mental health issues and coping skills among the youth amidst the Covid-19 pandemic in South Africa”, the HSRC team looked at wellbeing, mental health and social support among young people. The survey also looked at substance use and exposure to interpersonal violence during the pandemic.

Professor Heidi van Rooyen said the title was a timely one. “The outbreak of Covid-19 has led to the total disruption of life across the world. There has been mortality and morbidity on a scale not seen before.”

She said young people have had to deal with several types of grief and that many have lost family members. “That foundation, that grounding and a sense of having family who have your back, for many young people, those people are no longer there,” Van Rooyen said.

And while losing a loved one was painful, there were other types of loss too, she said: “There is collective sorrow and grief; a communal sense of grief at the loss of how things were. There are also ambiguous losses that lack the clarity and definition of a single point, like death. This makes it hard to move forward.”

Young people have also lost key “rites of passage” moments since the pandemic’s onset, such as matric dances and graduation ceremonies, she said. Van Rooyen added that informal, social interactions at university, such as spending time with other students in the campus cafeteria, were not taking place.

All of this was adding to a sense of social isolation, compounding the distress felt by young people during the pandemic, the panellists agreed.

Sifunda said this was revealed in the HSRC data. The survey canvassed young people between the ages of 18 and 35 who were in some kind of tertiary education programme. The majority of the respondents, 25.7%, were studying in Gauteng, while the lowest proportion, 1.6%, came from the Northern Cape. The biggest portion of respondents lived in townships, at 34.8%. About 28% lived in rural and farm localities while roughly 30% lived in urban areas. About 6% of respondents lived in informal settlements.

The data showed that young adults, aged 18-19, typically first-year university students, were having the most difficulty coping with the pandemic.

The data also showed that psychological distress was more prevalent among female than male students, and in those who thought they were at risk of contracting Covid-19.

However, Sifunda cautioned that alcohol and cigarettes were banned at the time, and this could explain why so few students used them.

The survey found that mental health, generally, is “neglected, poorly resources and underfunded”.

Responding to a question from the webinar participants about how the government could intervene, Sifunda said the first step was to have reliable evidence and research.

This was where the HSRC comes in, he added.

Sifunda also said South Africa needs a “dedicated national prevalence survey”. The last study, called “The South African Stress and Health study” was published in 2009, he said. Sifunda said most of the available data comes from “sub-population groups” such as pregnant women or university students, suggesting that the broader population probably hasn’t been screened for mental illnesses.

The HSRC recommended that programmes be designed that can address youth issues holistically, as opposed to a piecemeal approach. It was also important to tap into technological platforms to increase the reach and efficacy of healthcare interventions, the HSRC said.

One of the webinar’s participants, 25-year-old Daphne Mokagane, explained how hard the pandemic has been on young people. She said many young people were isolated from their families during the lockdown; others had to move back home when they lost their jobs.

Mokagane was raised by a single mother, who worked as a domestic worker in Bryanston. She said finding a job for young people was difficult enough before the pandemic. Now, many young people said finding employment was even harder, she said. Mokagane graduated in 2019 and has been unable to get the experience that so many employers require, she said.

Mokagane also highlighted the stress placed on young people as a result of their studies being delayed. Master’s degrees that should have taken two years are now taking three, she added.

“Young people need to interact with other young people,” she said. She said there were also a high number of dropouts because young people could not catch up with schoolwork missed.

There were also concerns about young people who were exposed to violence and sexual abuse while unable to leave their homes, she said.

The panellists stressed the importance of adults recognising the mental health challenges that young people are facing during the pandemic.

Van Rooyen said that adults, “need to have compassion and mirror for them (young people) that it is okay not to be okay.”

Meanwhile, a group of researchers at the University of Cape Town have conducted research on the mental health challenges of young people, too, including adolescents. Angelique Thomas, from the research group, presented their fundings at the webinar.

Their data showed the distress experienced by young people during the pandemic. Thomas said some of the issues highlighted by their survey included police brutality, feeling alone, feeling stuck, loss of family members, and stress due to finances and isolation.

Thomas said the young people showed surprising resilience. They reported using faith and tradition to stay positive. Young people found support through sport, church, their homes, and even the clinic, the researchers found.

“The research showed that young people are incredibly resourceful. They counteract adversities even with their limited resources,” Thomas said.

The HSRC identified a number of policy actions that could be taken to address mental health problems among young people. These were:

– Co-ordinated action by all concerned: government departments, health systems and other sectors;

– The prevention of and early detection of mental health problems before they require clinical attention;

– The provision of mental health services starting from the primary level, secondary and tertiary level of healthcare services.

“Mental health needs to be put firmly on the agenda and young people need to be the focus,” Sifunda said. — Sarah Evans

In the Democratic Republic of the Congo conflict, as well as peacemaking, have become ends in themselves, while the fighting is carried forward by its own momentum

It could prove difficult for government to loosen its grip on the public purse, but economists say the current extraordinary circumstances require intervention

The Brazil international revealed he was a big Arsenal fan as a youngster, having been captivated by Henry during the France star's successful spell in north London.

On World Chocolate Day on 7 July, experience chocolate like never before, paired with your favourite adult drink