Them/Two: the new kids on the block 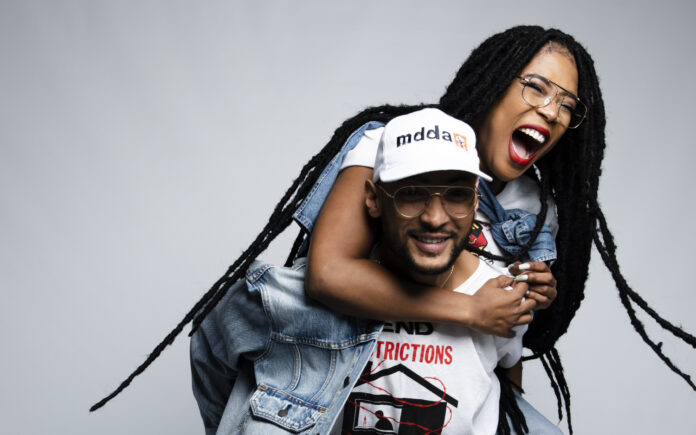 At the height of the pandemic, and in light of AMP and Caxton’s downscaling of local operations, Mikhail Brown and Naledi Radebe feared an impending dearth of the type of editorial work that both represented and elevated the stylistic aesthetics that excite them. For them, fewer and fewer mainstream local platforms reflected the streetwear, cultural nuance and polish that they yearned to see. And with the global shutdown in trade and transport, even access to Western and Asian fashion magazines was drastically stifled.

To fill the gap that the two of them simultaneously felt and saw, they launched an Instagram-based editorial platform called Them/Two (@them.two_) with the intention of developing authentic, beautiful and conceptual editorials that explore a multitude of fashion perspectives. With their shared love of fashion, they use their platform to embody (the editorials are primarily styled on themselves) a wide range of fashion aesthetics, including fetish wear, avant-garde couture, tailored suits and club-kid chic. For Them/Two, styling is as much about context as it is clothing, so each weekly editorial they compile is intended to capture a moment, embody a source of inspiration or react to contemporary discourse.

Even before the changes brought about by Covid-19, seasonal and cultural shifts that would once have been manifested, reflected and interpreted in countless editorials across countless glossy pages have instead emerged in the arena of social media as the collaborative projects of creative collectives, either supported or unsupported by digital platforms and publications. This type of large-scale industrial shift has always necessitated a corresponding shift in thinking for creatives looking for an entrée to the industry.

To Brown and Radebe, it appears that there’s a South African renaissance currently taking place. The way they see it, the global creative community is hungry to interact with and to consume the art, music, design and content emerging from the region. With global eyes more and more frequently turned towards South Africa and the region, it’s important to provide a perspective that isn’t prescriptive but rather representative.

As they put it, “fashion is a business, style is expression”, in that fashion is the business of selling clothes while style informs what aesthetics enter the mainstream and are marketed as fashion. For them, there is right now a disconnect between the mainstream fashion and the cultural style of Southern Africa. For fashion to feed and clothe the culture and identity of a society, it relies on a cohort of stylists who are considered, intentional and insightful — and an industry that listens to and values them.

Them/Two considers the streetwear in downtown Johannesburg — the “Braam kids” — to still be the most exciting fashion to be found locally. Whereas corporate-sponsored fashion weeks feel like “the Polo of fashion” and an opportunity to rub shoulders and be seen, the raw creative energy of those outside the establishment, with fewer resources but boundless ambition, results in style and aesthetics that are more original, outrageous and exciting.

As they see it, the surest evidence of this fashion-culture disconnect lies in the fact that two of the biggest names in the current local fashion landscape, Thebe Magugu and Rich Mnisi, don’t debut their collections at either of our main local fashion weeks, something that would be unheard of in most other countries. How do they think this disconnect can be resolved? In part, by recognising the importance of stylists, with special emphasis on POC, WOC and queer stylists, as well as by reimagining the mainstream fashion model into a system that’s more supportive of a wider range of designers, creatives and industry experts.

The work that professional stylists do is often seen as an afterthought or an optional extra, with many public figures and entities believing that good personal style is enough to mitigate the need for a stylist. The duo believes, especially for professional creatives, that stylists are integral to the development of a highly marketable personal brand. Without the research, analysis, wardrobe and professional networks stylists provide, some of the biggest names in music, art and acting would have significantly less impact. Look at Lady Gaga’s stylistic progression from album to album or the perfect symbiosis between Zendaya and Law Roach in creating her high fashion off-screen persona. Creatives who embrace the expertise of their stylists use every tool available to them to communicate their identity, vision and values.

Ultimately, Them/Two see styling as one of th0e ultimate forms of personal and identity expression that, when embraced on a larger scale, has the potential to result in a representative and beautiful collective style that is as diverse as our culture. — Anita Makgetla

Stories of Democracy, Freedom and Human Rights, as told by ordinary Chinese citizens

Minister Fikile Mbalula says motorists’ behaviour will change with disincentives for ‘unbecoming conduct’, but Outa and AA say the legislation was carelessly drafted