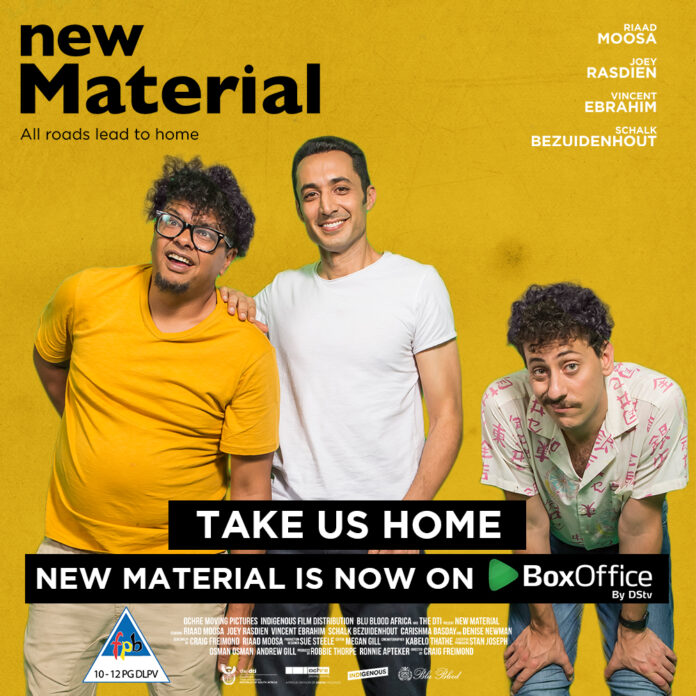 All roads lead to home.  ‘New Material’, the much-anticipated sequel to the hugely popular, award-winning ‘Material’ (2012), opens in cinemas nationwide this Friday, 26 November.

Cassim Kaif (Riaad Moosa) is back and, together with his best friend Yusuf (Joey Rasdien) and opening act, Hendrik (Schalk Bezuidenhout), he’s taking his new comedy show on the road.  From Cape Town to Durban, Johannesburg, Ladysmith, Richard’s Bay, Rustenburg, Empangeni and beyond, the three comedians blaze a trail of mayhem across the country, with every stop of the tour delivering a laugh a minute.

While international fame beckons in the distance, Cassim has to deal with the immediate complications of the national tour, not least of which is the challenge of his main sponsor, Laudium businessman and heir to the Sulabie Chicken Bite empire, Shabir Sulabie (Rajesh Gopie).  Shabir fancies himself a bit of a showman and when he is denied a place in the spotlight, he quickly turns on Cassim and Yusuf. Chaos ensues, and fellow comedian Hendrik, is forced to step in and defend Cassim and Yusuf with his questionable martial arts skills.

“This film is slightly different to the first, there is a lot more physical comedy but we do bring in the more touching aspects of the relationships.  A big theme of the film is family, and especially during this time, I think this film will be something that families can experience together and we hope that it will resonate with each person and put a smile on their face and touch their hearts a little bit,” comments Riaad Moosa.

‘New Material’ also stars Vincent Ebrahim (The Kumars at No 42, Material), Denise Newman (Material, Disgrace), Carishma Basday (Deep End, Material), Zakeeya Patel (The Girl from St Agnes, Material), Kurt Schoonraad (Tali’s Baby Diary, Skeem) and Shashi Naidoo. The film is directed by award-winning director Craig Freimond.
“To be able to go back to the cinema after lockdown is wonderful,” says Helen Kuun, MD of Indigenous Film Distribution. “We had to move the release of ‘New Material’ to late November, and we are delighted to finally be able to release the film in cinemas in time for the festive season. We have opted for a wide release as the film stars have broad family appeal. The film provides some hilarious escapism and great laughs by our funniest comedians.”

‘New Material’ is produced by Ochre Moving Pictures and Blu Blood Africa and is distributed by Indigenous Film Distribution.

2021: The year that made crypto a household name

Cisco: Taking businesses from the ground to the cloud

The SIU has recovered R34.2-million and is chasing a further R551.5-million of alleged graft from the government’s R152-bilion Covid-19 spend