African Blogtable: How will the Heat respond in game two of the NBA finals? 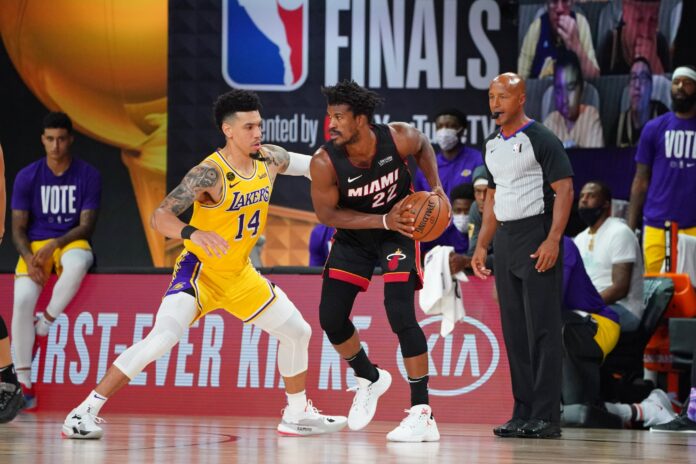 Amine El Amri, Le Matin (Morocco): I think coach Erik Spoelstra’s body language during game one showed the gigantic task that he found himself facing. Not only did the LA Lakers outscore and outplay Miami Heat, but they also put them in a very delicate emotional position. They shook them! Hence the primary task within the Heat is to make sure their mindset, however altered, is again at the highest level. Not impossible, knowing how important that particular characteristic is to the Miami Heat culture. Having said that, and looking back at the stats, there are only two aspects of the game in which the Lakers had a double-digit advantage: rebounds (54-36) and free throws (25/27 vs 11/14). And that just shows how terrible the Heat were inside, especially when Goran Dragić and Bam Adebayo were forced to leave the court, taking away any opportunity for a penetration. This is where they need to become a lot better if they don’t want to get swept away.

Keegan Kruger, The Pundits (South Africa): I am expecting much of the same in game two. The Lakers just seem to be a horrible matchup across the court for the Heat, and for them to really keep the game close they will have to hope the Lakers bench doesn’t fire, along with their two big guns. One seems to have to combat this Lakers side with full-blown physicality and if you are shy of that, then you just may get steam-rolled.

Nafy Amar Fall, Wiwsport (Senegal): The next game will be complicated for the Miami Heat. Coming back from such a catastrophic start seems difficult. Injuries for Adebayo and Dragić make it more complicated and we will have to monitor the recovery of these key players. Most of all, the Heat will need to be mentally ready. They were intimidated by the Lakers in game one, especially by LeBron James, and they will have to really give everything they have, from start to finish.

Nicasius Agwanda, Clouds Media (Tanzania): I believe the Heat have seen the tape and realized that the Lakers stole their shooting gene during the early blowout. They need to fix their shooting, while hoping that the Lakers can go back to their usual self of not being an elite three-point threat. Another thing in question is how to stop Anthony Davis. They need to find an antidote to his venom. The likes of Tyler Herro, Duncan Robinson and Kendrick Nunn need to “feel” the finals and the whole team needs to believe that they can beat the Lakers, while we all hope Dragić is fine.

Njie Enow, CRTV (Cameroon): Having played sport at a top level, I sort of comprehend athletes’ fantasies about living up to the expectations in key moments, at times to the detriment of their own health. Jimmy Butler says he will be ready for game two, but I’m afraid he’s heading the Kevin Durant way. His ankle didn’t look right and he struggled in the later stages of game one. With Dragić potentially out of the picture for game one, Butler seemingly is the Heat’s biggest asset. Preserve him and play the reinvigorated “Buckets” in game three. Bam clearly had trouble dealing with a scoring big man and I’m not very sure he’ll have figured out how to handle Davis in game two.

If Butler and Dragić are out, and cognisant of how well the Lakers set up for game one, I don’t expect a dramatic reaction. The Lakers’ confidence level is at all-time high, but the Heat, even without their star duo, still have a decent team with Herro, Nunn and André Iguodala. Putting up a strong performance in game two could help them build confidence going into game three, when I think there will be fireworks.

Refiloe Seiboko, Mail & Guardian (South Africa): It’s really easy to overreact to a first game blowout in a series. But nobody needs to get too high or too low just yet. Game three will be the real salient point of the series. What’s critical right now is health. The Heat need Butler, Adebayo and Dragić to be functional at the very least, but if not, Iguodala, Duncan Robinson, Herro and Jae Crowder have to be extremely solid. They’ve now been punched in the face and they could use that as fuel going forward.

Rotimi Akindele, Beat FM (Nigeria): After the Lakers’ win in game one, which saw the Heat being brought back down to reality, game two of the NBA finals will be a game changer. The Miami Heat know that a win for them would tie the series at one game apiece and a loss would see them fall behind 2-0 — and that would be a very difficult hole to climb out of. Their injuries are not helping them in any way, with their lack of size also being an issue and their ball-handling situations in need of a massive improvement. But they have the guts and must show this. There is really no pressure yet, unlike in 2014, but a good win in game two would definitely light up the series.

Stuart Hess, Independent Online (South Africa): It will depend on the state of those injuries to Dragić, Adebayo and Butler. Players tend to play through the pain barrier in the playoffs and, in particular in the finals, but the Heat need to be physically able to take on the Lakers. If those three are carrying significant ailments, they won’t be able to do that, which is sad, because it could lead to a very one-sided series.

Woury Diallo, Le Quotidien (Senegal): Quite frankly, I find it hard to see the Heat finding a formula to surprise the Lakers. Butler will have a hard time carrying the team on his own.  He tried to take matters into his own hands in game 1, but it was not enough. Facing a team of the Lakers’ calibre, they will need a whole team, a collective, to hope to win at least one or two games. Having said that, I think we have to wait for more details about the injuries of Dragić and Adebayo. If both players are not 100%, the series will get complicated for the Heat. Butler’s will and determination will not be enough. We saw that in the first quarter of the series opener. It was the collective that gave them a 10-point lead and it will take the same collective to restore their hope to go far in the finals.