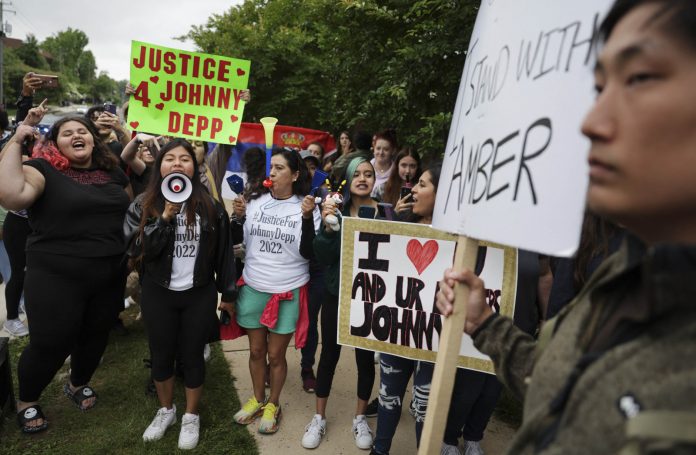 In 2018, the actress Amber Heard wrote an article for The Washington Post headlined, “I spoke up against sexual violence — and faced our culture’s wrath. That has to change.”

She wrote about how, despite the rise of the #MeToo movement, institutions continued to punish women for going public about domestic abuse. She wrote about losing jobs and brand endorsements because of her public fight with her abuser, who she did not name in the article.

Even so, Heard was still hopeful: “We have an opening now to bolster and build institutions protective of women.”

She urged more people to support the strengthening of the US’s Violence Against Women Act and to “continue to fight sexual assault on college campuses, while simultaneously insisting on fair processes for adjudicating complaints”.

About three and a half years later, in June this year, after a trial within a trial in Virginia in the United States, a jury found the headline, along with two other statements from the opinion article, to be false and defamatory.

The offending statements were: “Then two years ago, I became a public figure representing domestic abuse, and I felt the full force of our culture’s wrath for women who speak out” and “I had the rare vantage point of seeing, in real time, how institutions protect men accused of abuse.”

Two years earlier, Depp had sued a British tabloid for calling him a wife beater. He lost that case because the judge found that there was “overwhelming evidence” showing the articles to be “substantially true”. Echoing Heard’s Washington Post article, the judge wrote, “I also accept that Ms Heard’s allegations have had a negative effect on her career as an actor and activist.”

For the record, I believe Heard. But I believe that the biggest injustice was not inflicted in the courtroom, it was inflicted by social and broadcast media.

Moreover, despite pledges by governments, the police, judges and men that women and girls would be safeguarded, the status quo persists. Public violence to keep women in the place is demonstrated by how women politicians and journalists are treated online and in person. “Their place”, the home, is frequently filled with abuse and violence.

Dawson’s observation focuses on how women are raised to fear “stranger danger” yet the biggest danger tends to be in the home.

The Heard case demonstrates that even public violence is more nuanced for women than the fear of physical abuse from strangers.

In a recent interview, Heard said she does not hold the jury responsible for the verdict and that she is more worried about social media and how harshly she was treated on these platforms.

A week earlier, her lawyers had said that although jurors were barred from reading social media, they went home to their families every evening and had a 10-day break during the trial. It would have been impossible for them to not come across the very skewed social media conversations on the case. Depp’s attorneys denied this without providing a stronger counterargument.

Depp fans, most of them women, used social media to tarnish Heard and to sway public opinion against her. It was violent and, although women-led, it was rooted in patriarchy.

Women who accept patriarchy believe their low position is justified because they’ve been trained from birth to require men’s protection.

Since the introduction of 24-hour news in the 1990s, it has become entertainment. Increasingly trials are about spectacle and choosing sides.

Given the level of interest in the celebrity case, content creators used the trial to drive their numbers.

Social media has exacerbated this trend. People learnt very early that tweeting in support of Heard could make their account unusable because of the vitriol directed at them.

In the past, social media was praised as a way for campaigners to reach a global audience. Black Lives Matter used internet media to recruit and spread ideas such as justice. But we have also seen how social media can unify those with less noble causes, whether it’s an insurrection at the White House or to deny a woman justice in Virginia.

Because Heard is being tried in the court of public opinion, more women and other victims of domestic abuse will refrain from naming their abusers, fearing being sued merely for declaring publicly that they are victims.

And we should take the lesson from Heard’s harrowing experience to ensure that the public violence entrenched in our societies does not find itself in courtrooms, perpetuating injustice against those brave enough to seek justice.

More than this, we should seek to build institutions that don’t require victims to be brave to seek justice.

Zama Ndlovu is a columnist, communicator and the author of A Bad Black’s Manifesto.

The IMF effectively acts as a lender of last resort. Consequently, governments are reluctant to ask for IMF financing unless they cannot get enough foreign exchange from other sources

Wirecard: When a few wealthy men put entire societies at...