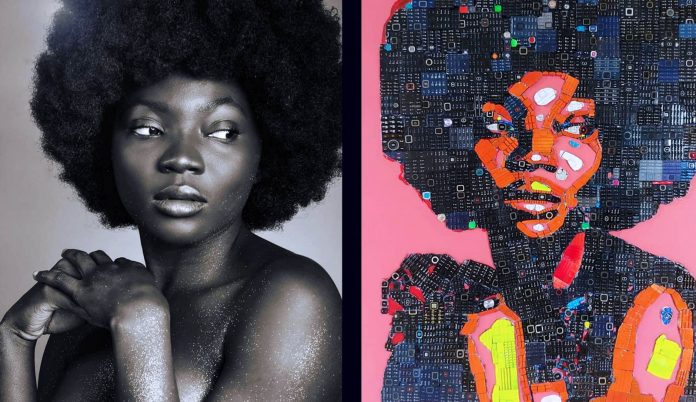 Born in the city of Buyo, in the southwest of the Côte d’Ivoire, Mounou Désiré Koffi has always had a passion for art. That passion — and his skill, recognised at school and then at college — gave him what so many creatives on the continent dream of … professional training and then a career in visual art.

“After my studies, I wanted to embark on a professional career; painting, trying to stand out, bringing creativity to my work,” he said during an interview in his workshop, a room in a house in Bingerville, a town near Abidjan.

But it was only in 2018 when Koffi’s journey as an artist really crystallised. And it all had to do with his other passion — recycling.

“My mission is to give e-waste a second life,” he said.

In 2019, Abidjan’s Galarie Parisiene Art-Z played host to his first solo exhibition, making his art and his vision visible.

“I lived in an environment where this waste existed. The telephone is essential in life, people use it a lot and when the gadget stops working they dump it in the trash bin, and more and more of it ends up in the streets. There is no mechanism to manage it,” he said.

“As an artist, I thought to myself why not use the things that people have discarded and then bring them back in another form to the people who have used these phones … so we’re trying to give a second life to these mobile phones.”

He hopes to use the proceeds of his art to open recycling centres and help educate Ivorians and people in the region about the opportunities that recycling brings.

Koffi’s passion was discernible as he reclined on the chair and described his journey as not only as an artist but as an individual doing his best to keep the environment clean and healthy.

There is certainly no scarcity of raw material in his country. According to government statistics, the country churns out more than 9 000 tonnes of electronic waste annually.

Nor does Koffi work alone. He has a team of young people who help him to collect used phone keypads from the city’s back streets, dumpsites and repair workshops. Some of the e-waste in the repair shops comes from neighbouring countries, especially Benin and Burkina Faso.

Koffi regards his work as an aesthetic opportunity to focus attention on contemporary issues such as a toxic environmental hazard that is a headache for manufacturers, dealers and users. Koffi’s works also reflect the world’s technological evolution as cell phones moved from the traditional keypads to the sophistication of the touch screen.

Touch screens often form the feet of his characters, with broken glass signifying the double-edged sword of new technologies, he explained.

One of Koffi’s admirers is Olivier Sultan, the director of the Art-Z Gallery.
“The painter achieves a happy marriage between impressionism and figurative art,” he said of Koffi’s work. — bird story agency