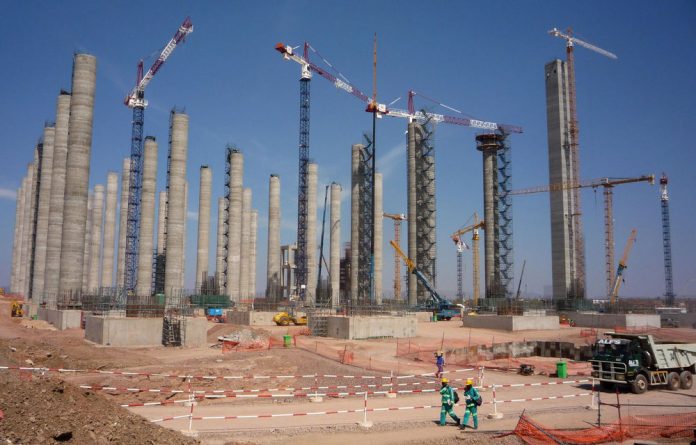 One of Eskom’s major answers to the national power crisis could have catastrophic effects on water supplies in Limpopo, where the huge Medupi power station is being built.

Medupi’s 4800MW output will make it the country’s largest power provider when it starts supplying the national grid four to five years from now. It is being built at a cost of R125-billion in Lephalale, in the coal-rich Waterberg region, where water supply is already under extreme pressure.

Medupi will compete for water with the approximately 120 000 residents of Lephalale, as well as with coal mines and with farmers, all of whom obtain their water from the Mokolo River and Mokolo Dam. The power station will also draw water from the Crocodile River and so compete with farmers who rely on that source.

“It’s a potential disaster,” says independent energy adviser Ted Blom, who accuses Eskom of not taking into account the huge additional amounts of water Medupi will require when it is fully operational.

“There will be between 2 000 and 5 000 people coming into Lephalale. There will be churches, schools and engineering services.”

He says the Crocodile River is not a reliable water source. “The river is not perennial, it has only summer rainfall. If you have a dry year, the situation becomes totally untenable.”

Department of water affairs spokesperson Linda Page told the Mail & Guardian this week that local supplies of water are adequate for both Medupi and other users.

But Lephalale’s municipal manager, Bob Naidoo, says the town’s water supply is insecure. “The entire Limpopo region has a scarcity — For now we are getting sufficient water, but when Medupi is up and running we can’t say exactly where the water will come from.”

He says the council is investigating alternative water sources.

“If more water from the Mokolo Dam goes to Medupi, less goes to farmers downstream,” says Peter Ashton, principal scientist at the CSIR.

The problematic effects of Medupi’s usage will go beyond South Africa’s borders, Ashton says. “The river joins the Limpopo River at our border with Botswana. From there the Limpopo flows northeast till it hits Zimbabwe. This means there will be less water available for our neighbours.”

Eskom maintains Medupi’s ­projected water requirement is 14-million cubic metres a year. But Francois van den Berg, president of farmers’ association Agri Limpopo, says about 19-million cubic metres of an available 40-million from the Mokolo Dam goes to the town of Lephalale. Most of the remaining water is used by coal mining companies and other industries, he says.

But Blom alleges that 70% of Johannesburg’s water supply already comes from treated sewage, so that the department’s plan for Medupi’s additional water needs will further stretch the city’s already strained water supply.

Critics say planning for the power station is even further compromised. Eskom has begun construction on Medupi (it is 10% complete), but the department is yet to complete feasibility studies on a pipeline from the Crocodile River and on expanding the existing pipeline from the Mokolo Dam.

Page says: “The development of large infrastructure projects takes a number of years and it is quite common to have many activities running simultaneously.”

Beyond acute problems of water supply Medupi is already damaging the quality of life in the area, Van den Berg says. Medupi is creating water problems that go beyond availability. Raw sewage is flowing down the Mokolo River to farmers because of the influx of construction workers to Lephalale.

“The river is used as drinking water for farmers and for crops,” he says. “Expansion happened very fast but the sewers were not maintained properly and the pipes are too small.”