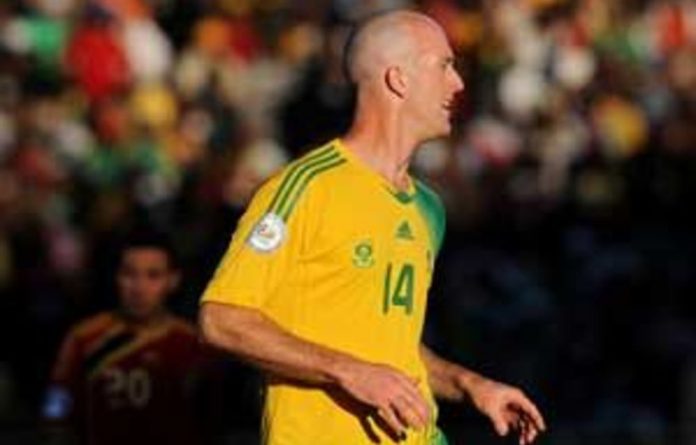 The pressure is getting to boiling point as the Absa Premiership draws to a close with second-placed Mamelodi Sundowns, confident they can edge log leaders SuperSport United to the title.

That is the word from Sundowns defender Matthew Booth, whose side face a tough clash at the Atteridgeville Super Stadium on Wednesday night when they host Platinum Stars.

Said Booth: “Stars are a bit of a hoodoo side for us, but with our confidence soaring we aim to keep the pressure on SuperSport.

“Stars will be no pushovers and we will have to stay focused, but we have not conceded a goal in the last three games and that adds to the confidence in the team.

“I reckon the league will go down to the wire and although SuperSport have a better goal difference, we have a match in hand.

“However, I know matches in hand are not points but such is the spirit in the camp we believe we are on course to win the title.

“We have the depth, the quality and will to win it and we are lying in wait should SuperSport slip up — and I reckon they will before the season ends on March 7,” he added.

“We are a far better team in every aspect to the one that was floundering six months ago. We have got our self belief and confidence back.”

Keeping it close
The Brazilians kept the pressure on SuperSport when they scored a hard fought 1-0 win over Ajax Cape Town at the Athlone Stadium on Sunday.

“That match was a potential banana skin for us, especially after we had watched SuperSport beat Free State Stars 2-0 the night before.

“That put us under pressure. But the boys showed tremendous character and gave notice we want to become champions.

“Those three points could make the difference at the end of the season,” said Booth who was full of praise for Lebohang “Cheeseboy” Mokoena, who scored the goal against the Urban Warriors and has taken on a new lease of life at Sundowns.

“I cannot understand why Orlando Pirates released him. He is a magic player, very gifted and one of our star performers at the moment.”

“Katlego is the form goal scorer while Pelembe is one of the trickiest players I have seen. He has done a brilliant job for us this season and could be the key to unlocking the Stars defence.”

Orlando Pirates, who are out of contention for the league, play struggling AmaZulu at the Orlando Stadium while the big match at the other end of the table takes place at the Charles Mopeli Stadium where Free State Stars entertain BidVest Wits. Wits are 12th with 27 points while Stars are 14th with 26 points. — Sapa