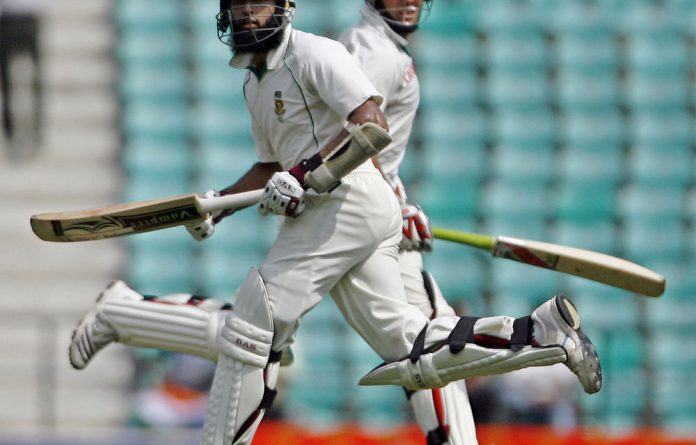 What South Africa did so well during their spectacular innings triumph in Nagpur was stick to the brand of cricket they have been successful with in the past, but adapt it brilliantly to Indian conditions.

As Paul Harris remarked after the victory, it was almost the perfect Test match for the South Africans.

Hashim Amla and Jacques Kallis feasted on the Indian bowling in a record partnership of 340, setting up a total of 558 for six declared that created the runs pressure they needed when bowling to the hosts.

That it was Dale Steyn who then ripped through the Indian batting line-up may have surprised some people, but not South Africa, because it was all part of their plan.

And then, in the follow-on, spinner Harris gobbled up three wickets in support of Steyn as India grappled with his frustrating leg-side line.

But it was Amla’s innings of 253 not out that was such a telling factor because South Africa’s game plan on the subcontinent depends on scoring big runs in the first innings.

Quality innings
It was a top-class innings of immense patience, judgment and skill in the way he manipulated the ball around the ground after South Africa had sunk to a parlous six for two in the first half-hour.

Kallis, South Africa’s most successful batsman, is as good a judge as anyone. “Hashim has come a long way and is definitely a main guy in our batting line-up. He’s fantastic to bat with because he has a very calm influence out in the middle. He’s proved everyone wrong who said he wasn’t a Test-class batsman and he’ll make many more runs for South Africa,” Kallis said.

Even opposing coach Gary Kirsten is a fan. “I’ve always thought Hashim was a fine player. It was a superb innings and he knows how to bat for a long time.”

Captain Graeme Smith gave a clear indication of how important Amla is in their winning plan.

“Hash brings us a lot of stability at number three, which is a key position. It’s been terrific watching him become the glue in our batting line-up at number three. The fact that he was involved in a massive partnership again is almost more important than him scoring 250,” Smith said.

For those few doubters of Amla’s impeccable credentials who may still exist, consider that the 26-year-old has featured in eight partnerships of 199 or more in the past three years and his average in that period is 54,72, comparing favourably with Smith, Kallis, AB de Villiers, Ricky Ponting and Sachin Tendulkar — in fact, anyone you could name. Eighteen of his 29 Tests in that period have been against Australia, India and England.

Although he possesses the most wonderful wrists in South Africa, Amla’s greatest strength is in his head. And, for all his undoubted talent, he spends plenty of time in the nets honing his game.

“Hashim is one of the hardest workers in the game; he’s always working to get better. He has good hands and he scores quickly, but his main strength is mental. He’s such a strong character,” Smith said.

Amla is still the quiet, modest man he always has been, and his celebrations are demure. He perhaps sells himself short when he says he does not feel any mentally stronger than his teammates; maybe that is a sign of true mental strength — that one is not aware of it?

Go-to guy
But he has the confidence to admit he enjoys being a “go-to man” for South Africa, someone to call on in a crisis.

“It’s a good time in my career and I’ve learnt a lot. I’m not a youngster any more and I see myself as a senior member of the team. I’ve played 42 Tests now. I just try to keep things as simple as possible. You’ve got to have a good game plan and be prepared to get through the tough periods. I’m grateful to be involved in a big partnership, but I don’t think I’ve got greater mental strength than anyone else,” Amla said.

Although Amla‘s discipline was obvious during his 675-minute epic, the lines Steyn bowled in his tremendous performance were indicative of the same attention to detail.

It’s one thing being able to swing the ball beautifully, but the ball needs to be consistently put in the right place to get international batsmen out.

“Dale Steyn used reverse swing really well, but his channel was really good. He took the ball away, but he would also bring it in from the same spot. He makes it a tough decision whether to leave or not. We were blown away by him,” said Indian captain Mahendra Singh Dhoni.

South Africa have learnt down the years that their pacemen must still bowl aggressive lines and lengths in India, despite the pitches not generally offering them assistance.

They will now look to the same game plan in Kolkata from Sunday to win the series, clinch the number one ranking and restore the reputation they created for themselves in 2008.