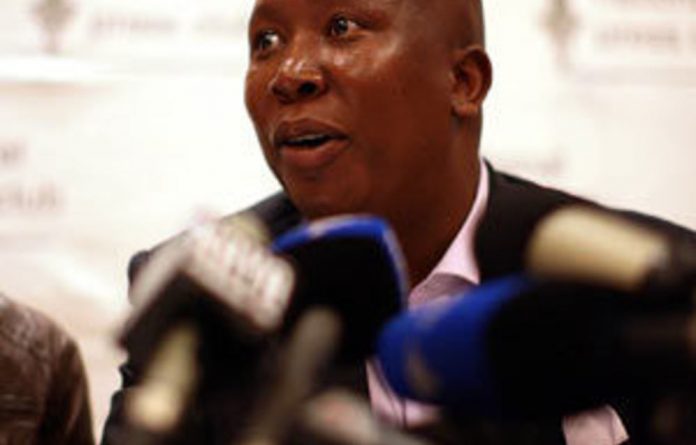 The African National Congress Youth League (ANCYL) wants the National Treasury to inform it of any investigation involving its president, Julius Malema, it said on Tuesday.

“The ANCYL will officially write to the National Treasury to ask about the investigations and check if those are ever linked to the president of the ANC Youth League,” spokesperson Floyd Shivambu said in a statement.

This follows a City Press article reporting that Finance Minister Pravin Gordhan had launched a probe into corruption in the Limpopo government’s tender procurement processes.

According to the report, quoting top secret documents, the investigation was launched in November, would be conducted by the National Treasury, the Special Investigating Unit and the South African Revenue Service, and was “likely to affect people in high places in the ruling ANC”.

City Press reported that Limpopo Premier Cassel Mathale was a “close ally” of both President Jacob Zuma and Malema.

Malema himself wielded “considerable influence” in the Limpopo government as he was close to several provincial ministers and provincial leaders.

The newspaper reported that analysts believed Malema had clout in the awarding of tenders — one of the province’s “top construction companies”, Bitline, was owned by Malema’s friend and ally, Ali Boshielo.

The ANCYL said on Tuesday that Malema was “willing to clarify anything that will be brought to him within the country’s laws”.

He would ask the National Treasury to “publicly disassociate” itself from the City Press allegations if there was no investigation.

Shivambu threatened to lodge an official complaint about the story with the press ombudsman and take legal action.

The ANCYL felt the story “might be misconstrued as true in certain circles”, and therefore sought to “put to rest” the allegations.

It viewed the story as an attempt to discredit Malema through a journalist “used by agent provocateurs”. — Sapa