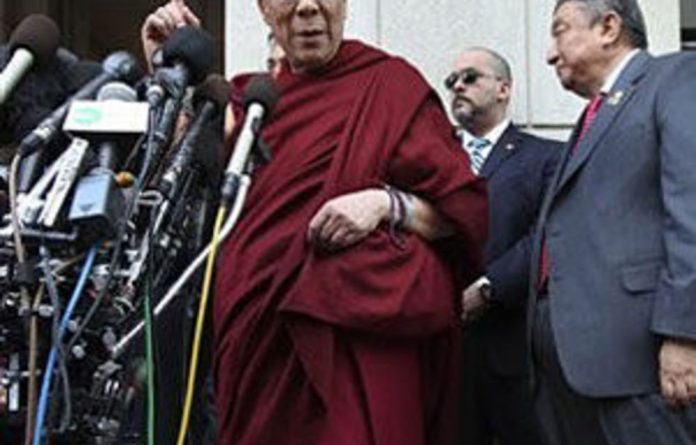 China on Friday angrily protested at United States President Barack Obama’s meeting with the Dalai Lama, saying it had “seriously harmed” relations and summoning the American ambassador in Beijing.

The denunciation came swiftly after Obama vowed support for Tibetan rights in his White House talks with the exiled Tibetan spiritual leader on Thursday, a meeting that China had repeatedly warned against.

Ma said the talks “grossly violated basic norms of international relations” and US pledges to respect Chinese sovereignty, but he gave no details on any specific reprisals.

The White House had meticulously planned the meeting in hopes of containing Chinese protests, inviting the Dalai Lama to a private area of the executive mansion rather than the Oval Office and not allowing cameras inside.

But the 74-year-old Buddhist monk took the unusual step of mingling with reporters afterwards, telling them he was “very happy” with Obama’s support and even engaging in a playful snowball fight.

The White House later put out a picture of the two Nobel Peace Prize laureates in the 45-minute meeting and issued a statement backing the Dalai Lama’s goals.

“The president stated his strong support for the preservation of Tibet’s unique religious, cultural and linguistic identity and the protection of human rights for Tibetans in the People’s Republic of China,” White House spokesperson Robert Gibbs said.

“The president commended the Dalai Lama’s ‘middle way’ approach, his commitment to non-violence and his pursuit of dialogue with the Chinese government,” Gibbs said.

Middle way
The Dalai Lama, who fled his homeland for India in 1959, advocates a “middle way” of seeking greater rights for Tibetans while accepting Chinese rule.

Beijing accuses the Dalai Lama of plotting to split up China, dismissing his conciliatory approach as insincere.

A US embassy spokesperson told Agence France-Presse that Huntsman replied by telling Cui “now is the time to move forward and cooperate in ways that benefit our two countries, the region and the world”.

Chinese Foreign Ministry spokesperson Ma demanded that the US take immediate steps to “eliminate the pernicious impact” of the White House meeting.

Ma said China’s determination to “safeguard its national sovereignty and territorial integrity was firm and unshakable”.

He added that any attempt to use the “Dalai Lama issue to interfere in China’s internal affairs would fail”.

Some US-based analysts believe China’s protests may be geared more for domestic consumption and that it is not interested in upsetting cooperation between the two nations.

‘We have never given up hope’
Just hours before the meeting with the Dalai Lama, the USS Nimitz aircraft carrier arrived for a visit in Hong Kong. Beijing had vowed to cut off military ties after the Obama administration last month agreed to sell $6,4-billion in weapons to Taiwan, which China claims as its own.

Obama had put off key steps that would anger China in his first year in office, hoping to work together on issues ranging from reviving the global economy to fighting climate change.

Obama did not meet the Dalai Lama last year ahead of the president’s first trip to Beijing. With Thursday’s encounter, the Dalai Lama has now met every sitting US president since George Bush Snr in 1991.

The Dalai Lama also met Secretary of State Hillary Clinton and was greeted across Washington by hundreds of flag-waving Tibetans who chanted, “Long live the Dalai Lama!” and “Thank you, President Obama!”

After his meetings, the Dalai Lama reiterated his stance that Tibet is part of China.

“We are fully committed to remain within the People’s Republic of China, for our own interest,” he told reporters. “Tibet is a landlocked country and, materially, very, very backwards.”

He also supported US efforts to seek friendly ties with Beijing and voiced understanding for Obama’s decision not to see him last year.

“It is wrong when some say, contain China. It is wrong,” he said.

The Dalai Lama did not specify how he expected Obama to support Tibetans, saying: “I think time will tell.

“Fifty years have passed. We have never given up hope.” — AFP