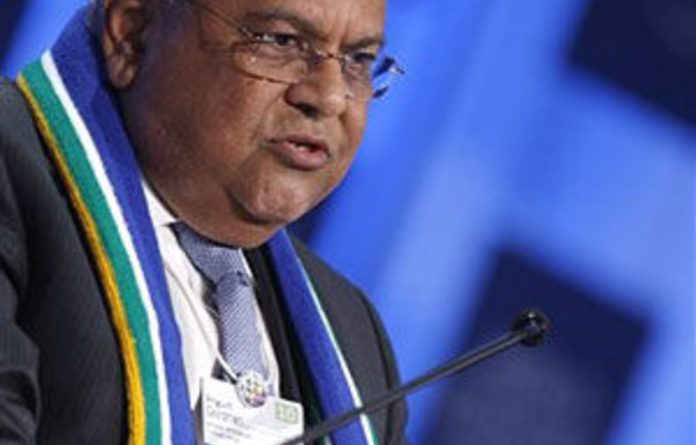 Pravin Gordhan may have been business as usual on the surface, but just beneath the headline figures of his first full budget speech as finance minister were politically sensitive reform proposals that are already drawing raised eyebrows in Cabinet and an angry backlash from the ANC’s left allies.

The broad outlines of fiscal and monetary policy, tax proposals and the divvying up of cash between government departments left little changed from Trevor Manuel’s last budget, but in seeking to open debate around a ‘new growth path” for South Africa, Gordhan and his team at the national treasury plunged into territory that has in the past proved politically toxic: labour market reform.

In what one senior treasury official conceded was ‘a clear move towards a two-tier labour market”, Gordhan appeared to recommend a relaxation in labour regulations for workers aged between 18 and 25 and state subsidies to reduce the cost of employing them.

Firms reluctant to hire inexperienced workers
The Budget Review, which sets out the reasoning behind Gordhan’s decisions, cites a study by the rich-country group, the OECD, which found that South African labour protection is ‘relatively flexible”, but went on to say that ‘the resolution of labour disputes and dismissals is slow and cumbersome, raising costs and perceived risks to employers — firms are reluctant to hire inexperienced workers when it is costly to dismiss poor performers”.

The solution, the Budget Review suggests, is that ‘adjustments to regulation, where required, would contribute to better outcomes for employment and industrial development”.

Gordhan is stepping relatively carefully for now. Among the only specific reforms mooted in the Budget Review are measures to reduce the risk to employers of hiring people on a trial basis. ‘Job creation for young work-seekers without experience would therefore respond positively to a relaxation of protective legislation during probation,” it argues.

It goes on in a more controversial vein: ‘To promote job creation the regulatory environment needs to support greater competition — this includes cutting red tape and administrative burdens on small business and reviewing the scope of collective bargaining agreements.”

Minimum wages may also need to be adjusted, the budget documentation suggests.

Collective bargaining and sectoral minimum wage determinations are at the heart of South Africa’s formal sector labour dispensation and Gordhan made clear his frustration over its impact in both the private and public sectors.

Last year’s wage round for government employees, he told Parliament, had produced a settlement that was ‘too high”, pointing out that public-sector wages had doubled in five years. Future demands would have to be moderated, he went on, if government was to achieve its objectives for social spending, infrastructure investment and the creation of new government jobs.

And he ended his speech with a call to government, the private sector and organised labour to forge a new social compact in terms of which government would provide ‘the policy frameworks and socioeconomic conditions to accelerate job creation”, while business should ‘balance the pursuit of profit with social justice”.

Organised labour, he suggested, must look beyond its existing constituency — those with formal sector jobs — to ’embrace and act on behalf of all our country’s workers, both those employed and those desperate for employment”.

In an interview with the Mail & Guardian the morning after the budget speech, as Cosatu had already begun to make its displeasure clear, Gordhan was more cautious.

‘The aim was to put [out] some data,” he insisted.

‘These are suggestions that are in the marketplace of ideas. The point is to make employment creation part of a constructive discussion.”

Pressed on the point he said: ‘I think I must be clear that I don’t want to be drawn on the labour market. More relaxed labour standards for young employees should not be taken to mean a free-for-all. It is very important that we reach consensus on these things.”

At present there is wide divergence between the key economic departments of government on these and other proposals, with the Budget Review outlining an approach to faster growth and job creation founded on a relatively liberal policy mix: sound macroeconomic foundations, capable government, microeconomic reform to boost competitiveness and productivity, with a sound social safety net and some leftish elements, such as public employment programmes.

New growth plan
Even as Gordhan was outlining this approach, however, the department of trade and industry was planning for the release of its latest Industrial Policy Action Plan, which insists that the ‘new growth path” is best cleared by infusions of state cash for targeted industries, tariff protection for sectors vulnerable to global competition and rules to boost local content in government tenders.

This approach is in marked distinction to the observation in the Budget Review that since the opening of the local economy in the 1990s ‘industries that struggled to raise productivity growth to retain market share have had a harder time adjusting to competition. Sectors that have responded positively experienced a marked increase in capital investment, improved labour productivity and higher employment”.

Asked about the apparent contradiction, Gordhan said: ‘It is a creative tension; it must lead us to innovate. How, for example, do we create capacity in South Africa to be competitive? Can we give ourselves the freedom to think broadly, develop trust and come to points of convergence.”

Trade and Industry Minister Rob Davies was more blunt. When the passages in the Budget Review dealing with the labour market were pointed out to him by the M&G he said: ‘That is going to be the subject of very wide debate.”

Asked if these differences of opinion did not point to ongoing confusion about the government’s economic policy, Gordhan said: ‘We have reached an interesting crossroads. It requires that people think differently. The world is changing around us and the old models are being questioned.”

The exiting labour dispensation is clearly not the only thing being questioned. Gordhan announced a shift towards public-private partnerships in the health sector, beginning with a major revamp of Chris Hani Baragwanath hospital and he linked that plan to efforts to improve public health infrastructure ahead of any implementation of the left’s cherished national health insurance (NHI) plans.

The inclusion of private hospital groups in the foundations of the proposed new health system will be seen by some supporters of the NHI as vitiating its fundamental purpose — to strengthen the public sector.

And calls for a more efficient approach to immigration, premised on evidence that highly skilled immigrants help to create jobs, will run into long-standing government anxiety about inward migration that has resulted in what the Budget Review describes as ‘cumbersome” implementation of the rules.

‘Next year’s budget will look different’
A new approach to the budget itself, modelled on the outcomes determined by the presidency for job creation, health, education and welfare was not yet evident, Gordhan said, because work on the current budget began before these 12 priorities were agreed on.

‘Next year’s budget will look very different,” he said.

‘If our goal is to create jobs for our people, particularly young people, if our goal is to make our economy competitive, the conversation about a social compact needs to be a lot more dynamic, resulting in a practical impact, not just another statement.”

Work to forge a shared approach between departments in the Cabinet’s economic and employment cluster was well under way, Gordhan said, but the chorus of dissent that greeted his proposals, however tentative, suggests it may be some time before we have a government economic policy, rather than the divergent policy proposals of competing departments.