Tearing down the boerewors curtain 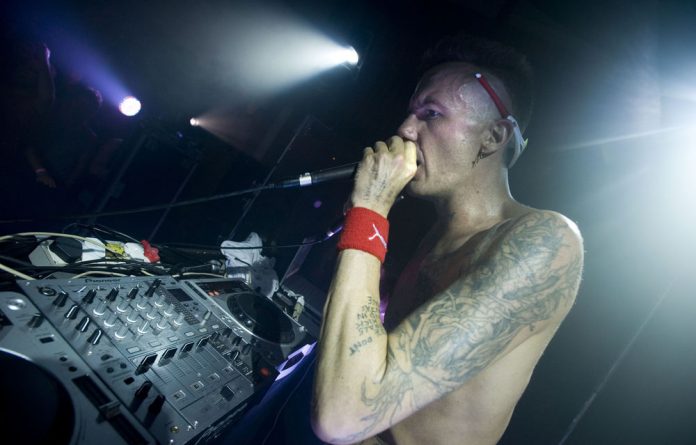 It’s ironic that it was Koos Kombuis who wrote about Die Antwoord as a band lacking in talent and integrity last weekend. Kombuis, one of the fathers of Afrikaans rock ‘n roll, who took on PW Botha’s repressive regime with his friends Johannes Kerkorrel and James Phillips in the late 1980s, has finally admitted that he understands nothing about the new pioneers of Afrikaans music.

“Die Antwoord is not from my church,” he wrote in his regular Rapport column, slating the latest Waddy Jones project as a “racket”, “narcissist” and “sexist”.

To recap: Die Antwoord is a three-piece “zef rap” outfit from Cape Town that has, literally, taken the world by storm over the past three weeks.

In a number of days three million people around the globe downloaded their music videos. Not bad for a band that didn’t have a website until a few weeks ago and has never headlined a main show in South Africa.

They are planning an international tour, have been putting up expensive posters all over Jo’burg and are done with answering questions from local rags until the launch of their debut album, $O$.

Never before has an Afrikaans act achieved so much success in such a short time (disclaimer: Die Antwoord’s songs are predominantly English, but drenched with Afrikaans lyrics too foul for Kombuis’s taste).

Kombuis is bitter and one has sympathy with him. It was after all the Voëlvry movement that opened the path for subversive Afrikaans music in a time when the charts were dominated by songs about the sea and roses.

But being angry and bitter doesn’t explain the explosion of Afrikaans hip-hop, rap and dance groups in the past few months. There has been a definite departure from serious rock ‘n roll to serious satire, partying and beats.

And with all the main acts, the artists have adopted the personae they sing about. Their looks, songs and language are all part of a statement; filthy, sexist and nihilist as it may be.

“I think the young Afrikaans generation is one of the most misunderstood, misplaced and underestimated groups of people in the world, which makes them pretty interesting. [We] therefore wanted to create something for all these guys, an anthem everyone could associate with,” says Xander Ferreira, the man behind the disco-funk outfit Gazelle.

Gazelle’s Die verlore seun was a huge hit on the Afrikaans music channel MK when it was launched last year. It features Ferreira, dressed like Idi Amin, dancing on tractors and with farm workers while he explains to his father why he left the farm.

“Sorry dad I had to leave the farm cause I missed the disco lights too much,” was the chorus that drove the volk mad. He wanted to create something in his mother tongue that would make Afrikaans party animals proud, says Ferreira, who has toured the world with Gazelle. He is planning more international trips for 2010.

He praises Kombuis and his contemporaries for being “undercover revolutionaries that probably changed more minds for the better than some ANC freedom fighter living in luxury exile on the shores of Lake Geneva … Today I guess we try to revive and at least claim this part of Afrikaans culture.”

Also at the forefront of the new movement is Zander Tyler, better known as Jack Parow. Parow raps about getting moered (beaten up) in “common” bars and pities those thinking they are cooler than him because they smoke Yves Saint Laurent cigarettes and listen to the Dirty Skirts.

Tyler explains his vibe: “I’m not scared to say what I think and I am saying what a lot of people are thinking so it’s kief.”

Afrikaans hip-hop and rap is of course not a new thing, with Cape Flats groups such as Brasse Vannie Kaap, Kallitz and Jitsvinger having been around for a number of years. Why has it taken their white counterparts so long to come to the party?

“I think people didn’t really expect it, so it took a bit longer for them to realise. But, ja, now I’m here and ready and the years of scratching around in the underground have paid off,” says Tyler.

“I also think that the whole rock movement was so big that it pretty much overpowered the rest. But now people are looking for the new thing and I’m here to help them find it.”

In a recent interview with Vice magazine, Die Antwoord had the following to say:

You reckon zef rap-rave in Afrikaans has any potential beyond, say Sunnyside or Parow?
Ninja [Waddy Jones]: Our first album we decided to dig into our own personal flavour and just keep it real you know, and represent where we’re coming from and how we speak. The next album we’re working on is called Ten$ion, and on this album we want to rap more like tour guides of South Africa, like maintain our South African style and flavour but still bring it for people in the overseas to understand … with like 95% English and then just a bit of Afrikaans.
Yo-Landi Vi$$er: Afrikaans for all the swearing bits.
Ninja: To sum it all up, in this place, South Africa, you get a lot of different things: whites, coloureds, English, Afrikaans, Xhosa, Zulu, watookal — I’m like all these different things, all these different people, fucked into one person.