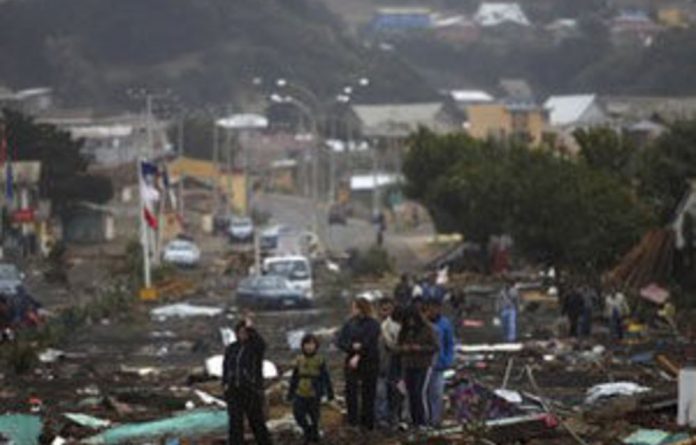 Chilean rescuers used shovels and sledgehammers on Sunday to find survivors of a huge earthquake in Chile that unleashed a Pacific tsunami and triggered looting by desperate and hungry residents.

Saturday’s quake, one of the most powerful in a century, killed more than 300 people and devastated homes and highways, dealing a heavy blow to infrastructure in the world’s number one copper producer and one of Latin America’s most stable economies.

In the hard-hit city of Concepción, about 100 people were feared trapped in a ruined apartment building and police used tear gas and water cannons to disperse a crowd of looters carrying off food and electrical appliances from a supermarket.

“People have gone days without eating,” Orlando Salazar said. “The only option is to come here and get stuff for ourselves.”

Two million people in Chile were affected by the 8,8-magnitude temblor, said President Michelle Bachelet, who added that it would take officials several days to evaluate the “enormous quantity of damage”.

Crushed cars, fallen power lines and rubble from wrecked buildings littered the streets of Concepcion, which has 670 000 inhabitants and lies 115km south-west of the quake’s epicentre.

A string of strong aftershocks have rocked the country and strong one shook buildings in the capital, Santiago, early on Sunday. Thousands of Concepción residents camped out in tents or makeshift shelters, fearing fresh tremors.

Firefighters used drills and shovels to search for signs of life in the rubble and battled to free dozens of people believed trapped in a collapsed apartment building.

“We spent the whole night working, smashing through walls to find survivors. The biggest problem is fuel, we need fuel for our machinery and water for our people,” Commander Marcelo Plaza said.

Daunting task
The government faces the task of helping rebuild an estimated half a million homes that were severely damaged as well as hundreds of buckled roads and collapsed bridges.

The quake has raised a daunting first challenge for billionaire Sebastian Pinera, who was elected Chile’s president in January in a shift to the political right and who takes office in two weeks.

“We’re preparing ourselves for an additional task, a task that wasn’t part of our governing plan: assuming responsibility for rebuilding our country,” Pinera said late on Saturday.

“It’s going to be a very big task and we’re going to need resources.”

The economic damage could be between $15-billion and $30-billion, risk assessor Eqecat said.

Some economists predicted a deep impact on Chile’s economy after the quake damaged its industrial and agricultural sectors in the worst-hit regions, possibly putting pressure on its currency.

Government officials said the copper industry had enough stocks to meet its commitments despite a production shutdown at two major mines due to the quake. Diesel imports were stepped up after damage forced the closure of two oil refineries.

Saturday’s quake triggered tsunami waves that killed at least four people on Chile’s Juan Fernandez islands and caused serious damage to the port town of Talcahuano, flooding streets and lifting fishing boats out of the sea.

On the other side of the Pacific, Japan’s north-eastern coast registered waves of up to 1,2m, but officials later lowered the state of alert.

Hundreds of thousands of people in Japan, New Zealand, the Philippines and Russia’s far eastern Kamchatka Peninsula were told to evacuate for fear of a tsunami caused by the Chilean quake, but there were no immediate reports of damage. – Reuters