Chronicler of miracles and mirages 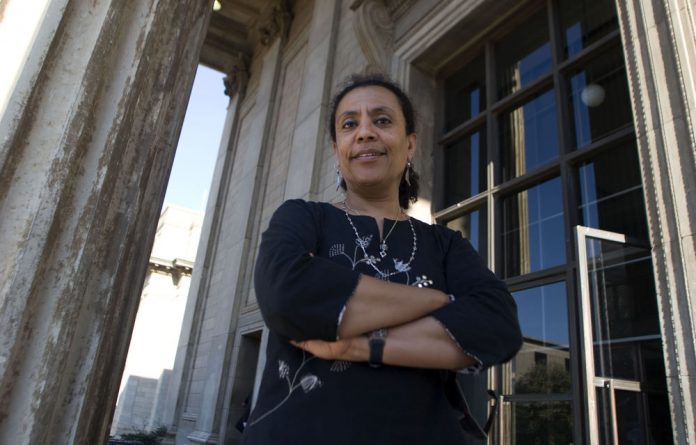 At a recent book sale I bought VS Naipaul’s The Writer and the World, a collection of the Nobel laureate’s essays. Soon I was engrossed by “The Crocodiles of Yamoussoukro”, Naipaul’s cynical but fascinating 1982 piece on the interplay of modernity and tradition in the Côte d’Ivoire during Félix Houphouët-Boigny’s reign.

At around the same time I began reading up on the Ivorian lecturer, painter and poet, Veronique Tadjo, who also heads Wits University’s French Studies department.

Last week I sat in on one of her lectures for third-year students, in French, of So Long A Letter, the classic penned by Mariama Bâ, the late Senegalese writer. I have less than basic French, but Tadjo’s demonstrativeness and deliberate demeanour helped ease shafts of light into my darkness.

But it’s as a writer rather than as a teacher that Tadjo has found fame. In the past few years Tadjo’s The Blind Kingdom, Queen Pokou and As the Crow Flies — all books originally written in French — have become available to English-speaking readers.

The Blind Kingdom is about a dark, dysfunctional state, which appropriately uses the symbol of the bat. This state, unlike the blind nocturnal mammal, is ramming its head in self-destruct mode into walls and high-rise buildings.

Queen Pokou, winner of the 2005 Grand Prix Litteraire D’Afrique Noire (the premier prize in Francophone African literature), is a beautiful retelling of the founding myths of the Baoule people of Côte d’Ivoire.

It is the story of Abraha Pokou, an 18th-century Ashanti woman, fleeing royal intrigue and murder at the Ashanti court. Pokou and her followers flee, with the royal Ashanti army in pursuit, and come to the great Comoe River. An oracle tells them that to cross, they have to sacrifice a royal child to the river spirits.

Tadjo has not stuck to the received legend; she has complicated it by offering other possibilities. In the introduction Amy Baram Reid (the translator) is quoted as saying that Tadjo “consistently seeks to challenge both accepted generic boundaries and artistic truths in her artistic work”.

In one version of Tadjo’s rendition of the legend, Queen Pokou refuses to sacrifice her only child to the river. After crossing the river and finding sanctuary in a village, her faction is caught by the royal army and sold later to European slave traders. Soon they find themselves in the Americas — “the great exile”. Even though detail is scant, their despair at finding themselves in a strange land among a strange people is palpable. “They had lost their faces, their names, their tomorrows,” the narrator says.

This transatlantic connection seems to tie into another of Tadjo’s interests. After undergraduate studies in Abidjan, she went to the Sorbonne for further education in African-American literature and civilisation.

“I was convinced that because of the clash of cultures between Africa and the West, we were also destined to change as Africans. I was interested in understanding what had happened to African Americans in terms of the process of acculturation they have been through,” she says.

For Africans who remained on the continent, especially in West Africa, sacrifice is important. Once, on a visit to Ghana, I read, to my amazement, a story in a magazine that suggested that when Lake Volta (the world’s biggest man-made lake) was built, a human sacrifice was made with the approval of Ghana’s founding president, Kwame Nkrumah.

Naipaul’s essay is, in part, about the crocodiles the late president Houphouët-Boigny kept at his forest retreat. In Naipaul’s account there are several people who fall into the artificial lake and it’s never quite clear whether their deaths are accidental or “a forced sacrifice”.

Naipaul argues in the same essay that Africa often seems to be in “a state of becoming. It is always on the point of being made something else. So it arouses hope, ambition, frustration, irritation. And even the success of the Côte d’Ivoire induces a kind of anxiety. Will it last?”

The peace and stability that Côte d’Ivoire enjoyed for years has not lasted, mostly because of ethnicity. For decades, the country was united. There was no problem between the north (mostly Muslim) and the south (mostly Christian and animist). “Some thought Côte d’Ivoire was a miracle while others thought it was a mirage,” says Tadjo. “At the moment, it looks like it was the latter but it doesn’t mean it’s going to be like that forever,” she says, optimistically.

The situation continues to depress. A few weeks ago the country’s president, Laurent Gbagbo, dissolved his government and the electoral commission because of a dispute over the nationality of some of the people included in the voters’ roll.

“We have reached a stage where some say it’s better to have stability than elections. What I can’t understand is why the international community is pushing for bad elections. This means you have unrest before the elections and unrest after the elections,” she says in her French-inflected English.

Gbagbo’s critics say the 400 000 people he wants expunged from the roll are from ethnic groups in the north who are unlikely to vote for him.

Queen Pokou seems to be questioning the whole policy of Ivoirite (Ivorianness), a philosophy that once referred to the common heritage of Ivorians, but later became an exclusionary mantra championed by tribalists. Tadjo finds it odd that a people who are descendants of the Baoule — originally Ashanti people mostly found in Ghana — should exclude other recent migrants on the basis of origin. “We are all migrants as we have all more or less come from somewhere else. The borders inherited by colonisation have divided us,” she says.

Born to a French mother and an Ivorian father in Paris, Tadjo says “maybe this dual parentage helps me to see differently”, to be “more inclined to accept diversity”, even though her “commitment is to Côte d’Ivoire and Africa”. She is wary of people who are too comfortable in their identity. “It can lead one to become intolerant,” she says.

Her new book, due in May, is titled Loin de Mon Pere (Away from My Father). It’s a contemporary novel about her fatherland seen through the prism of a family saga. Tadjo likes the filter that comes with distance.

Elusiveness is also at the heart of As the Crow Flies, an experimental novella with a deceptive centre that one is never quite able to pin down; it picks up and drops several stories about people living in a city. Loose and unstructured, peopled by nameless characters, it doesn’t have the narrative fluency of Queen Pokou or The Blind Kingdom.

“I believe in readers being active participants,” she told an interviewer in the Sunday Independent last year. “I want them to continue the stories [where I leave off]. I think literature is about breaking the rules. You read the book and you ‘get’ some of the stories and don’t ‘get’ others. That does not bother me, as I am from a culture where you grow with books. The stories in As the Crow Flies are what you make of them,” Tadjo says.

A writer, poet or painter: which label does she prefer? “These are not mutually exclusive but complementary,” she replies. “I believe I am a better writer when I paint. People want to put you in a box. The moment they can’t pin you down it becomes a problem. But I think it shouldn’t be like that. I am interested in the process of creation, in looking at life from different angles.”

Just as well she is dismissive of labelling, because not many boxes have enough space to contain the labels: bilingual writer; painter; poet; teacher; scholar; book illustrator; born in Paris; and working in the Anglophone world.