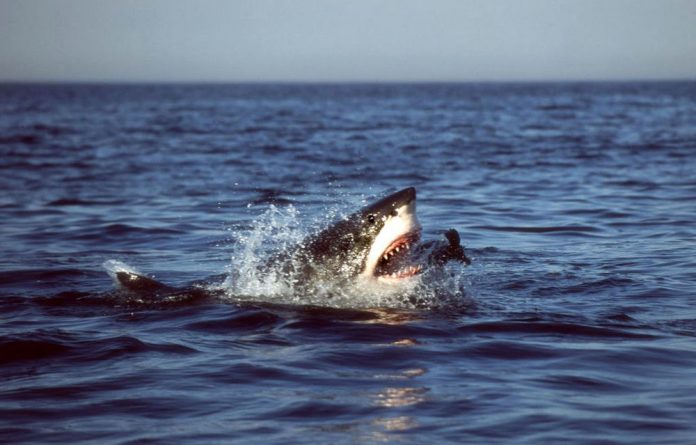 I placed my mask over my face and checked the regulator. We had made it from the beach through the big surf — it was a rough day — and were now 6km off the coast, sitting on the gunwales of an inflatable dive boat that was rising and falling through 2m or more every few seconds.

“Remember,” said Kenny, one of the instructors, “I’m your dive buddy — you stay with me. Okay? If we see sharks, we remain calm, we stay upright in the water, we give them space.”

There is something quite comforting about the steady suck and hiss of scuba apparatus. Your breathing slows and becomes regular. You are separated from the world by a sheet of glass. You get that irrational feeling of safety that a mosquito net can bring in man-eating lion territory.

And we were in man-eater country. South Africa’s Indian Ocean coast saw 86 shark attacks between 1992 and 2008, with 11 fatalities. Before the trip I went through the species of shark in my copy of Sea Fishes of Southern Africa, noting their characteristics: “may threaten divers”, “positively linked to attacks on humans”, “voracious predator” — the word “aggressive” came up time and again.

In Cape Town there is a much publicised thrill available whereby divers are lowered in a steel cage with some bait. Sharks then attack. Sharks, after all, are fiendishly dangerous. They are demons for a secular age. Even snakes have a better reputation.

But Nigel Pickering disagrees with all the demonisation. A former police diver from England, he came out to South Africa with his wife, Lesley, in 2003 and chose to live in the small and leafy town of Umkomaas, 40km south of Durban on the KwaZulu-Natal coast.
Umkomaas is an amiable place with a few good restaurants and bars on a long stretch of sandy shoreline. Nigel and Lesley set up their dive school in a handsome clapboard building with bright, comfortable rooms where divers can stay.

But there was one other major attraction that drew Nigel to this coast: sharks. About 6km offshore, in the impressively muscular ocean, is a shallow area known as Aliwal Shoal. It is regularly listed among the world’s top dive sites, being home to myriad sea creatures, including several species of shark. And Nigel is on a mission when it comes to sharks.

“They can be dangerous, of course, but I believe that, with caution and care, they can be appreciated and watched like any other animal.”

On our boat there was a countdown: “three, two, one …” and we all rolled backwards and into the water. I followed the rope that led down into the murk. The rough weather had ruined Aliwal’s normally good visibility and we were reduced to about 8m. I couldn’t see any other divers; the leader was already out of sight.

After a minute I reached the sea bottom at 18m. I turned to look behind me and got a sudden jolt of adrenaline.

The shark was 3m long and about the same distance from me, cruising effortlessly away. It didn’t seem at all interested, or particularly shy. I found this strangely comforting. It was also comforting to see that it was neither a tiger nor a Zambezi shark, both notoriously aggressive species that live on Aliwal at certain times of year.

More divers appeared. I recognised Kenny’s blond hair. By hand signals he told me to search in the coarse sand patches between rocks. Within a few seconds I’d found several shark’s teeth and tucked them in the cuff of my wetsuit. The ragged-tooth shark, or raggie, loses teeth throughout its life.

Leaving the sandy area, we reached some rocks — and more sharks. They were circling the divers: raggies of 2m to 3m moving gently, keeping us at a safe distance. They looked ferocious, but raggies are not aggressive at all — though their inquisitiveness can look scary.

One made a turn and glided towards me. I kept still. Its eye came past my mask, less than a metre away. I could easily have reached out and stroked its silky skin, but I did not. We merely stared at each other for a moment. There is no response in a shark’s eye, no contact, no telling what lies behind that cold glare.

I remembered Nigel’s words when we talked before the dive. “Sharks are interested in one thing — food. There really isn’t a lot else going on inside their walnut-size brains. Most people think: it’s an apex predator and it’s out to get me. But that’s not true. There is no evidence that sharks deliberately eat people. Experiments on brain activity in lemon sharks — a supposedly dangerous species — show that they react to fish blood in the water, but not to human blood.”

The raggie slipped out of sight. Had I held my breath? It’s a cardinal sin in diving, but I couldn’t tell. I moved off, swimming after the group exploring the cracks and fissures in a tumble of submarine crags. This was a very different aspect to our dive: tiny creatures of iridescent colour, microworlds of soft corals and sponge, and brightly painted orange and blue nudibranchs — a type of sea slug.

Dick, our dive master, was out in front, inspecting a bunch of whitetip reef sharks, a harmless species (although not to be confused with the oceanic whitetip, which is known to attack humans). He had told me what to expect while we were on the boat.

“What about great whites?”

“We do get them. I saw a huge one here a couple of years ago — it swam within inches of me.”

“Were you afraid?” Daft question.

“Sharks are like dogs: if you turn and run, they’ll chase and maybe attack. If you stay calm and upright in the water, they can see you’re not food.”

The evidence is in favour of conservationists on this. At Aliwal, one of the busiest dive sites in the country, there has been just one raggie attack, when a diver accidentally cornered an individual, which then gave her a minor bite on the arm. As for tigers: despite doing daily baited dives for them, Nigel knows of only one incident — when a cameraman got himself into a sardine shoal where sharks were feeding. A tiger, swimming at speed through the fish, grabbed him by the bum, then, realising he was not a sardine, let go immediately.

For the shark worldwide, the situation is precarious. A survey by the International Union for Conservation of Nature found that a third of all oceanic sharks were close to extinction and a further third were threatened or vulnerable. The primary culprit was over-fishing: sharks are targeted for their lucrative dorsal fins, which go to Asian restaurants around the world for shark-fin soup, a priceless dish for brainless people.

The European Union was the world’s biggest exporter of shark fins until the 2009 ban on “finning”. It remains to be seen if this will have any effect on the estimated 100-million sharks killed annually.

Leaving the whitetips behind, we moved on, taking time to inspect the other fish and some lovely soft corals. The rhythmic hiss of air combined with the gentle progress was mesmerising: diving, I said to myself, is meditation in rubber. I lost track of time. Fortunately Kenny was keeping an eye on his watch and signalled the ascent.

The moment when you break the surface is always a sad one. The undersea world is instantly gone, like a dream on waking. Instead there is the graceless fumble with equipment, the awkward snatch for air above the slapping waves. I pulled the mask down, spat out water, gasped for air and heard the diveboat’s engine gunning hard about 50m away.

But then Kenny was pointing. “Dolphins!” They were coming directly towards us. Rising up in the swell, I caught a glimpse of sleek dark bodies curling neatly from the water. I finned hard to get higher, grabbed the mask and got it back on, got the regulator in. I sank down just in time to see the dolphin pod pass sleekly beneath us. Now they looked silver and graceful, slicing through the water without any apparent effort, then they were gone.

Half an hour later we were back at the dive centre. I rolled back the cuff of my wetsuit to let a dozen shark’s teeth clatter to the table. In my skin were the scarlet impressions of their triangular shape. It was less than an hour since I had been watching the raggies glide past — feeling a bit seasick from the wild weather. Nevertheless, I was already starting to wonder: “What would it be like — to be out there with tiger sharks?” —