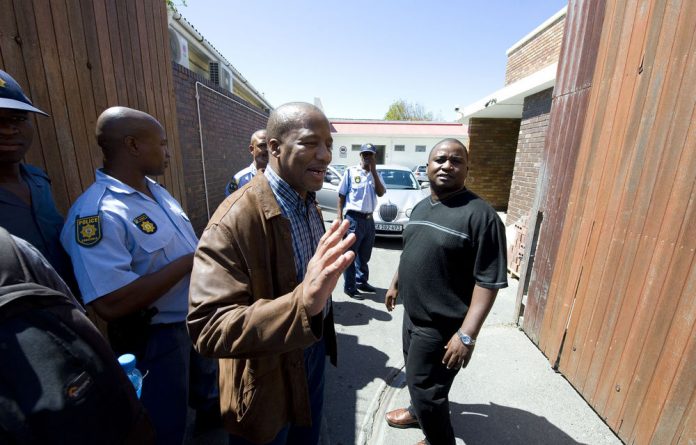 Cape Town’s mayoral committee member for safety and security, the Democratic Alliance’s JP Smith, says he believes the move to suspend the use of Dräger breathalyser machines in the Western Cape after the arrest of African National Congress national spokesperson Jackson Mthembu on a drunk-driving charge was “no coincidence”.

“I find it difficult to believe that the move to invalidate the Dräger machine in the Western Cape was not an attempt by ANC-aligned elements in the National Prosecuting Authority to influence the outcome of the case against Mthembu,” Smith said this week. “The NPA down here knew nothing about it.”

Mthembu was driving in the bus lane on the N2 in Cape Town at 7am last Thursday when he was stopped and arrested for allegedly driving under the influence of alcohol.

After he was tested on a Drãger breathalyser at the newly launched Vanguard Mall “Shadow” — Safely Home Anti Drunk Driving Operations War Room — centre, Cape Town officials said he was more than three times over the legal limit. He was also filmed at the centre.

Smith said blood was not drawn from Mthembu, as the NPA had said the breathalyser was accurate. But Mthembu had admitted having a few drinks when a traffic officer asked him if he had been drinking, as his speech was slurred.

News that the use of the breathalyser had been suspended in the Western Cape hit the headlines five days after Mthembu’s arrest.

“I’m concerned that elements in the ANC are willing to sacrifice an important innovation in the fight against drunk driving for the sake of a political crony,” said Smith, “though I must say Mr Mthembu was entirely cooperative and never unpleasant.”

ANC spokesperson Ishmael Mnisi denied any attempted political interference in Mthembu’s case. “All the ANC has done is support one of its leaders,” said Mnisi. “The law should proceed and we respect that.”

Mthembu, a member of the ANC’s national executive committee, is considered the party’s most senior national spokesperson. ANC sources said his job was extremely pressured.

Asked whether Mthembu would be suspended or disciplined, Mnisi said he had broken no party rules. “There’s really nothing that says Jackson deserves to be suspended,” he said.

This week NPA national spokesperson Mthunzi Mhaga was adamant that the NPA had not announced the suspension of the breathalyser in the Western Cape. Asked who had told the media that the suspension, which took effect in Johannesburg two weeks ago, also applied to the Western Cape, he replied: “I don’t know.”

Mhaga later SMSed the Mail & Guardian to say he was “sure the reporter didn’t hear me clearly, because the suspension was only in Johannesburg”.

Western Cape transport minister Robin Carlisle described the confusion over the Dräger as “a curious thing”. He said the Western Cape NPA and the directorate of public prosecutions were still investigating why it was suspended in Gauteng.

It has been reported that the Gauteng move was to close a legal loophole caused by a certification problem with the machines.
Traffic sources in Cape Town said it remained unclear whether the Gauteng devices differed from those used in the Western Cape, and when they were last calibrated.

The breathalyser was the preferred method because the results of blood tests took a long time to come back, they said.

Carlisle said that according to the directorate of public prosecutions, the Western Cape would continue using the Dräger and 1 000 drunk-driving cases were now pending. “At the moment we’re bleeding and breathing, just in case,” he said.

Mthembu will reappear in court on March 24.

Meanwhile, the other ANC spokesperson who has been in the news denied widespread reports that he has been suspended.

“I’m on compassionate leave in the Eastern Cape because my uncle has died,” said Brian Sokutu. “I would like to clear up this issue.”

Mthembu publicly rebuked Sokutu last week for telling news agency Sapa that President Jacob Zuma had failed to declare his assets to Parliament because the president had “many spouses” and a “large family”.

He said the comments were “in total breach of ANC protocol and also without any consultation with the ANC leadership” and that party disciplinary procedures could be invoked.

Sokutu told the Mail & Guardian that he had been “really taken aback by the response”, as he was merely reiterating what presidential spokespeople Vusi Mona and Vincent Magwenya had said on the same issue in other interviews.

When he returned to work, he had been told to attend a meeting with the ANC’s human resources department and Mthembu “for role clarification”.

More than a language problem

Mthembu was taken to Mowbray police station, where jogger Chumani Maxwele was taken in February after being arrested by members of President Jacob Zuma’s VIP protection unit.

The Mail & Guardian is in possession of affidavits by the three traffic officers, which will be used in the police inquiry.

According to an affidavit by traffic officer Andre Norman, when he and two other officers, Furnall April and Deon Sampson, brought Mthembu to the station, SAPS members asked them if they knew “the importance of this person from the ANC”.
According to April’s affidavit, police officials gave the traffic officers conflicting case numbers, which would have hampered the case. Sampson claims in his affidavit that a detective also said that the commissioner would charge those who had arrested Mthembu.

Norman states that they alerted the station commander, Superintendent May-Louise Dyers, who then made sure that her staff were fully cooperative.

Police sources told the M&G that a misunderstanding had arisen at the Mowbray police station because of a “language problem” and that there had been no attempt to obstruct justice.