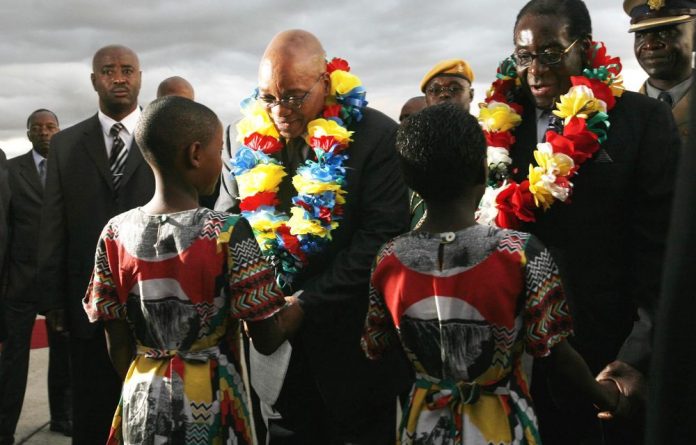 President Jacob Zuma has pushed for an early resolution to the stalemate in Zimbabwe, with the parties agreeing to attend to all outstanding matters and report back by the end of the month.

But he could not get Zimbabwe’s leaders to agree on an election date. A fixed timetable for new elections will be set only once outstanding issues have been discussed and ironed out.

Zuma, who has shown increasing impatience at the slow pace of reform in Zimbabwe and the constant bickering, was anxious to nudge the country towards elections by next year.

The year-old coalition remains fragile and there is agreement that only elections will bring a solution. But conditions for a free and fair election do not exist so it is unlikely that Zuma’s hopes will be realised.

The Movement for Democratic Change (MDC) complained that Zanu-PF is already mobilising its militia for fresh violence should an election be called, and President Robert Mugabe again reeled off his complaint about sanctions.

Zuma took a new direct approach late on Wednesday: he summoned some of the men at the centre of the key dispute — Mugabe’s controversial senior appointments. He held talks with Gideon Gono, governor of the central bank, and Johannes Tomana, the attorney general.

Zuma also met Roy Bennett, who has been barred from taking up his position in government because he is facing treason charges.
Vincent Magwenya, Zuma’s spokesperson, said Zuma was pleased with the pace of the negotiations so far. He said Zuma had taken a direct approach and met some of those whose appointments were contentious to get a better understanding of the issues being raised by both sides.

“It was important for the president to engage directly with other key players in Zimbabwe to create understanding on how to make matters move forward.”

Magwenya said there was a “commitment on all sides to work harder in finding a lasting solution”.

Meeting the men was a departure from the approach of Thabo Mbeki, who restricted his intervention to the main leaders.

Mugabe, sources said, had been opposed to Zuma having direct talks with the three, and was “especially rankled” that Zuma had met Bennett, one source said.

Zanu-PF insists that Bennett, Prime Minister Morgan Tsvangirai’s choice for deputy agriculture minister, cannot be sworn in before the courts clear him of plotting to assassinate Mugabe. Tsvangirai is the leader of the MDC.

Mugabe sees the choice of Bennett, a displaced farmer, to the agriculture ministry, headed by a staunch Mugabe ally, as deliberate provocation.

Bennett appeared upbeat after the meeting. He said he had a “very productive meeting, very supportive of the Zimbabwean people”.
Tomana, who is accused by the MDC of persecuting its supporters, would not comment.

Sources say Gono could keep his position because both parties have agreed to new legislation that will significantly restrict his powers.

Patrick Chinamasa, the justice minister and a key Zanu-PF negotiator, said the talks would continue on March 26 and 29. All the parties had agreed that the process should not go beyond the end of the month. A progress report would then be given to Zuma, he said.

“We will conclude our discussions and spell out matters we have agreed on and those we disagree on,” he said.