ANC must spring-clean, nothing less 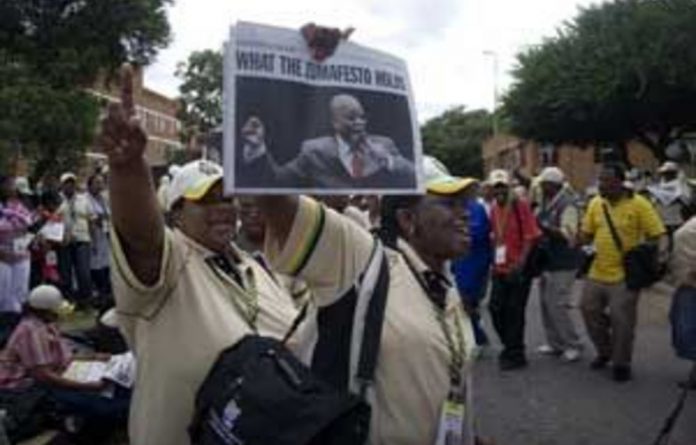 These are unsettling times. Among both black and white South Africans there is a paralysing feeling of anxiety, drift and imminent collapse.

This in itself damages the economy because many, especially in the public sector, feel that their hard work will be cancelled out by those greedily eating away scarce public resources. There is a choking sense that the current generation in government may not have the ideas or political will to lead us out of this malaise.

Many supporters of the ANC also wonder whether we will be struck by that curse of African liberation movements — the failure to improve the lot of the widest number of people and to create a better and caring society.

This is a cataclysmic shift in the political climate. Are there any solutions?

There are new task teams, calls for more debate on morality, new laws … But with no urgent amendment of the electoral law to allow citizens to elect their representatives directly, rather than for party leaders to choose them, these will be Band-Aid measures. This crisis has deep institutional, moral and leadership dimensions, and only a spring-clean of leadership, ideas and institutions will lift the gloom.

In most democratic societies the obvious way out of such stagnation is an electoral solution. This is not realistic in our case. The opposition parties are still too limited and the ANC is still too dominant.

The alternative is for the ANC itself to spring-clean. This will mean making itself more democratic, transparent and responsive. It will demand political courage, will and resolve from the ANC’s leadership, though any ANC leaders who champion a shake-up of the party are likely to have their careers killed off.

The ANC desperately needs a better calibre of leadership at all levels. Amilcar Cabral, one of the great thinkers of African liberation ideology, said the success of liberation movements that become governments depends on the personal moral behaviour, decency and honesty of their leaders and members. Cabral argued that these qualities were more important when they were in government than an adherence to ideology and a mechanical dedication to the rules and policies of the party.

Inside the ANC, prospective leaders must be elected on a truly competitive basis. The ANC leadership must open all internal party elections. Candidates must apply openly for all vacancies, as one applies for a job in the private sector. Interviewing panels must be independent, staffed by neutral veterans, or even independent outsiders with status. Candidates must be judged on the basis of merit, moral character and commitment to public service. This will help to bring fresh blood into the party.

The policy of African leadership must be done away with, because it is being manipulated. If Trevor Manuel, for example, is the best candidate for the ANC presidency, he must be elected as the ANC president.

In the public sector, appointments to senior government, state-owned enterprises and commissions must be opened up beyond the ANC membership pool, across colour and political affiliations.

Importantly, the system of merit must be applied across the party and public service. The lack of such a system has not only made these areas less appealing to the talented, it has also allowed the mediocre, by bootlicking the local party strongman, to flourish. It has also meant that independent-mindedness, which is needed to hold elected officials accountable, has been discouraged, because advancement is based on sucking up to authority.

The ANC leadership must rid itself of the most corrupt senior party leaders first. Ministers and public servants who are under performing, even if they are powerful in the party, must also be sacked.

The reality is that behavioural change among citizens is only going to be fostered if ANC party leaders are seen to follow the rules applicable to everyone else. Flagrant ignorance of the new democratic laws by post-apartheid leaders will only encourage the apartheid-era culture of evading the law to persist.

There should not be two sets of laws: one for the party aristocracy and another for ordinary citizens.

A lifestyle audit of all members of all party leaders and public servants is absolutely crucial — it will also boost public confidence.

Drop black economic empowerment as a policy and give companies BEE points for how much they invest in job creation, black education and housing; and for uplifting the physical and social infrastructure of townships and rural areas, and supporting the five-million entrepreneurs in the informal sector.

Honesty must also be restored to the centre of public debate. In a crisis, it is better for any government to stick with core policies, provided these are genuinely in the interest of the whole country, and then resolutely implement them. Double-speak to try to please everyone will just compound the uncertainty, drift and paralysis.

Only substantial reform at the centre — in party, government and individual behaviour — will inject fresh public confidence and unlock the paralysis. Continuing “business as usual” by the ANC leadership in the face of our current crisis will hit the ANC electoral fortunes. If public service delivery remains sluggish, and leaders keep on looting, more and more ANC members and supporters will desert the party.

Doing nothing will continue a negative cycle of waning public trust in the government, which can only lead to more violent community rebellions against the government, more self-enrichment at the top as those in power loot as much and as quickly as possible before the resources dry up, and those in the private sector with the talent and money either cut their losses in South Africa and run, or eschew public commitment to look after themselves and their families.