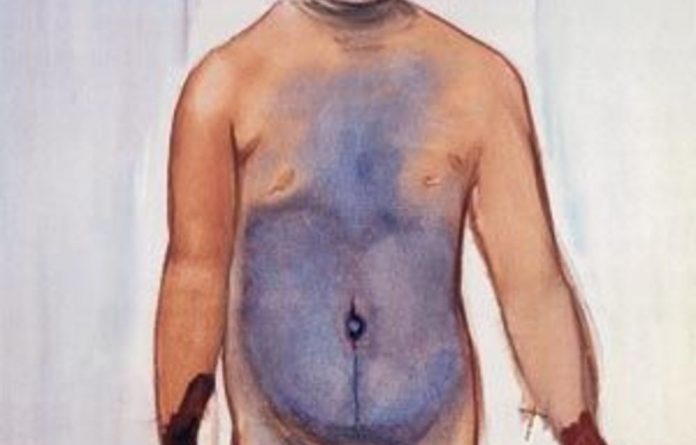 One of the reasons I wanted to review this book (apart from the fact that it is very attractive and doubtless very expensive too) is that I struggle with Marlene Dumas’ work. Some of it I find extraordinarily beautiful and moving, yet some of it I find, in a word, clunky. Certain paintings I think are downright ugly, but that challenges my sense of beauty and leads to interesting questions about what Dumas is doing in her work — not that I’ve answered them fully.

This large, extensively illustrated art book, with essays by artists and critics, a long interview with Dumas, and much added material written or collected by Dumas herself, should clarify some of my reactions to her work, or so I had hoped. If it fails in part to do so, I can at least now see that that has to do with the openness of Dumas’ art itself, its capacity to set off a range of unstable, conflicting responses, and her refusal as an artist to settle on any neatly quotable summation that explains it all.

It is enlightening to learn that Dumas studied art at a time when conceptualism (the 1980s wave) was in the ascendant. Painting was dead. And yet a teacher of hers, as she recounts, looked at her work and told her that she was simply a born painter, “poor girl”. How, then, to be a painter in a post-painting world? To me, the most valuable insight conveyed by this book is to see Dumas’ work as taking place in the afterlife of painting, the life-after-death of painting. It is as if the people in her paintings (and almost all contain the human form) are ghosts beamed in from Hades to trouble the living. Her work resurrects them.

It’s important to know, too (which I didn’t), that Dumas usually paints from photographs and occasionally from classic paintings such as Holbein’s Dead Christ or Caravaggio’s Sepulchre of St Lucia. Photography killed classical painting — painting as a realistic representation of what we can see in the world. (Photography also, in some sense, kills its subject, like the lepidopterist kills the butterfly he is carefully studying.) After photography, painting came to be about paint as much as or more than it was about its ostensible subject. Dumas’ work incorporates both the history of painting after photography (expressionism, particularly) as well the pop-art use of photos as sources of images already mediated by culture and technology.

Hence her concern with pornography, for one thing. In watercolours such as Porno Blues (1993) it is perhaps most apparent how she uses “ready-made” images and transforms them, rendering what was explicit and exact as murky and shadowed, indeterminate in its very form. One wonders how useful it would be to see more of the images Dumas has used: the photograph of Josephine Baker upon which she based one work, the subject of Mariuccia Casadio’s essay in this book, shows how radically she has transformed the image. A casual glance would barely reveal the connection at all. But I suspect that that is relatively rare in Dumas’ work, so strongly do the traces of an “original” photographic image persist, deliberately, in her work.

The book makes clear that Dumas’ work is informed and enriched by conceptualism, while demonstrating that her early conceptual works were not particularly interesting. It also shows how, for her, personal concerns trump theory. Yet she’s quite capable of theorising about her work — not, it seems, to justify or explain it, but to extend its reach into the world.

Look at an image such as The Painter (1994) and you feel the immense power Dumas can achieve in a painting. A girl child stares balefully at the viewer. She is naked. One hand appears to have been dipped in blood, though one must presume that it is “really” paint; the other is mostly drenched in blue, though some red lingers there too. The image is frontal, indeed confrontational, as though the child were irked at being interrupted in her work or play, yet there is much humour and irony in the depiction too. It’s entirely logical that she be naked — she’s busy painting, after all. She’s not naked so she can be looked at, so she can be a “model”. She isn’t “posing”. She’s just there.

This painting says so much — and that’s just to read it as a realistic image. It says something about the whole history of the nude in painting (the male gaze, the female object), about agency, autobiography, the imagination. Dumas says she likes images that imply a narrative, a life beyond the image (and that’s part of her engagement with photography). Her work has that quality in great richness, and not just in narrative terms. Its emotional ambivalence, its indeterminacy, lack of stylistic stability, and more, are elements that give it such power.

Dumas’ interview with fellow artist Barbara Bloom in the book is intriguing but goes in too many directions at once, while Dominic van den Boogerd’s overview of her career is useful but something of a plod. Ilaria Bonacossa’s essay (Further than the ‘I’ Can See) is much more interesting than Casadio’s, while the texts written or collected by Dumas herself have the scattered energy of the Bloom interview. But the book’s real value is not in the text. It’s in the images — so many to pore over, to feel, to react to and be struck by again and again.