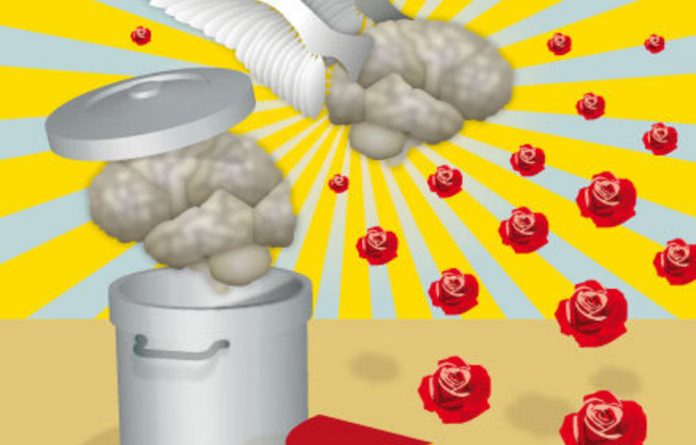 I’d like to tell you about a book I really enjoyed, but that happens to suggest that what I do for a living is a load of rubbish. The title of the book is Smile or Die: How Positive Thinking Fooled America and the World. Its dedication: “To complainers everywhere: turn up the volume!”

The book is Barbara Ehrenreich’s well-researched attack on “positive thinking” as “mass delusion”. Martin Seligman, the president of the American Psychological Association, comes in for criticism; even Deepak Chopra takes a knocking. It’s a fascinating read.

Ehrenreich writes of her own experience of breast cancer, of feeling bullied into a “mind over matter” positive-thinking approach. When my late husband was dying I read several of the books she mentions: Getting Well Again by Carl O Simonton and Bernie Siegel’s Love, Medicine and Miracles. Their proposition: stress weakens the immune system and increases susceptibility to disease; conversely, they concluded that being calm and thinking positively will boost your immune system and promote wellness.

Indeed, I remember listening to visualisation tapes with Joe; a deep voice over a background recording of waves inviting you to visualise cell warfare; your healthy cells attacking and defeating the cancer cells.

The mind-over-matter proposition is problematic for me. I know people, like Joe, who had everything to live for, and were deeply satisfied by what they were doing, and they died — quite quickly. I’ve known others whose lives offered little joy, yet the cancer did not spread and life carried on longer than they wanted.

Siegel’s research showed that cancer patients in support groups live longer. This became popular dogma. Now Siegel’s study turns out to be a fluke. The Psychological Bulletin of May 2007 says new studies show that although you may feel better if you’re in a support group, there’s no evidence to prove any link to living longer.

Ehrenreich methodically attacks the positive-thinking industry and motivational speakers. She lambasts speaker and coach Jeffrey Gittomer: “Get rid of negative people in your life. They waste your time and bring you down.” AJP Maroney advocates: “Negative People Suck. Avoid them at all cost … Trust me, you’re better off without them.” Ehrenreich drily observes: “It is not so easy to abandon the whiny toddler, the colicky infant, or the sullen teenager.”

The “God wants you to be rich” chapters review the new churches with their “positive thinking” religious leaders, such as “televangelists” Jerry Falwell and Pat Robertson. A 2007 poll showed 17% of Americans belonged to a “prosperity gospel” church. “God wants you to be prosperous” and “Think positively; attract what you desire” is advocated as the key to this happening — forget the consequences of indebtedness.

Ehrenreich fuelled my indignation as I read of companies selling “positive thinking” to workers they are laying off. Corporates distributed millions of copies of Who Moved My Cheese? so that employees might see that losing a job might be the best thing to happen in their lives.

Her final chapter lays responsibility at the door of positive thinking for the creation of the housing bubble, which ended so dramatically when the subprime mortgage market imploded.

She cites the Washington Post‘s Steven Pearlstein: “At the heart of any economic or financial mania is an epidemic of self-delusion that infects not only … unsophisticated investors but also the smartest, most experienced and sophisticated executives and bankers.”

So what does all this have to do with a column on coaching? Ehrenreich is consistently negative about coaches. In the context of her book the criticisms are not misplaced. But what criteria are needed to avoid throwing out the baby with the bath water?

Many coaches do stunning work with clients, work that is enabling and which leads to the client making decisions about new pathways in their lives, or taking a new approach to tackling problems.

The key for me lies in the research being done by neuroscientists. When we are fearful, the amygdala, an almond-sized part of the brain, kicks in within a fifth of a second. Its activity deprives the rest of the brain of glucose and oxygen to ensure total focus on our flight-or-fight response. We’ve needed that to stay alive through harsh evolutionary conditions.

But for creativity, innovation and problem-solving we need our prefrontal cortex to fire up. Positive emotions such as interest, joy and happiness increase our levels of dopamine and it is dopamine that enables our learning state. Research shows that people create more options and come up with more solutions when they are in a positively engaged state of mind.

When there is ease, when appreciative inquiry taps into the strengths and values of the client, dopamine increases and helps us to think well, and even better if both the left and right sides of the brain are active. South Africa has a wealth of coaches who are dedicated to working with clients in this way.

All coaches cannot be tarred with Ehrenreich’s brush. I applaud her work. It’s a valuable insight into our global society. But we need people to be able make informed choices about coaching.

Nation needs to be ready to let Mandela go