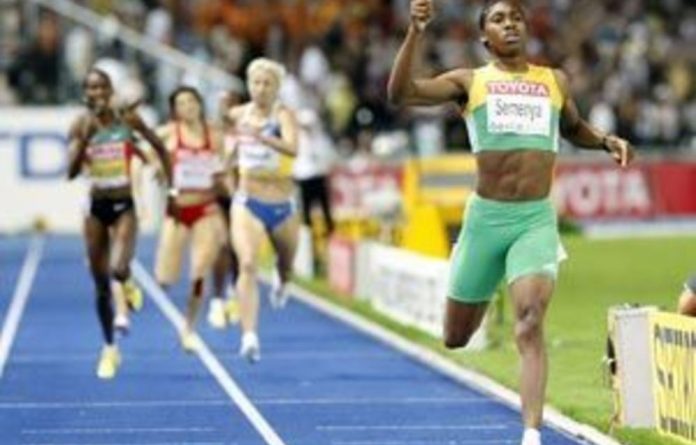 Caster Semenya, the world 800 metres champion at the centre of a gender verification row, should be allowed to compete immediately in female events, her lawyers said on Wednesday.

Semenya has not competed since last August when she won the world title in Berlin.

Athletics South Africa (ASA) has made clear Semenya is not banned from competition but said she must wait for the results of her gender tests from the International Association of Athletics Federations (IAAF) which are not expected until June.

Her lawyers from Dewey and Leboeuf’s South Africa office told eNews that test results obtained in February showed Semenya can compete as a woman.

“Caster’s medical team have looked at the results from Berlin and South Africa,” Benedict Phiri said. “And have also conducted their own tests and there was a point in time, I think mid-February, where we got the go-ahead to say we’ve looked at everything now and based on what we’ve seen, we believe Caster is entitled to participate in female athletics competitions.”

Semenya was prevented from competing in Stellenbosch, near Cape Town, last month by ASA and released a statement on Tuesday saying she would hold back her return until a European Athletic Association meet on June 24 in Zaragoza, Spain.

“We didn’t want to run a collision course either with Athletics South Africa or the IAAF. We saw that she had to run under these umbrella bodies at some stage and hence we didn’t choose confrontation,” lawyer Greg Nott said.

Phiri said the IAAF’s gender verification process needed to be quickly completed because the 19-year-old’s life and career had been put on hold.

“It is causing her harm and distress. The fact that she was prohibited or prevented from competing in Stellenbosch was a big frustration to her,” Phiri said, “because as far as she’s concerned, and as far as everyone around her is concerned, there really is nothing that is stopping her from participating in female athletics competitions.” — Reuters

In response to the Covid-19 pandemic, Eswatini, South Africa and Zimbabwe have implemented new rules on disinformation. But these may have unintended consequences
Read more
Advertisting
Continue to the category
Coronavirus